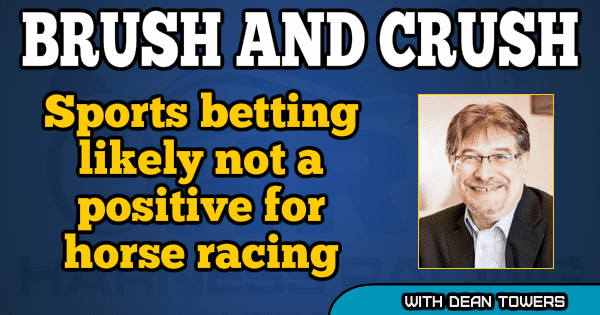 Sports betting will likely not be a positive for horse racing

We’ve seen this movie before.

As I am sure you’ve heard by now, the Supreme Court struck down the ban on sports wagering, throwing it back to the states. Almost immediately, Monmouth Racetrack in New Jersey announced their wish to accept bets, and should be able to do so before June.

The tapestry of wagering in the U.S. is a lot different this week than it was a few weeks ago.

Before this was passed we looked at the bull case and bear case for horse racing. This time I’d like to throw out the graphs and numbers and examine things from a simple, historical perspective.

Over the last week, I’ve read something like this from various quarters of the sport:

“We should welcome sports betting because more people will be betting and we’ll be able to sell our product to them.”

This line of thinking seems a little dubious.

When Napster sprung up in the late 1990’s, compact disk manufacturers were not happy because more people would be exposed to music. If you owned a Kodak kiosk at the mall, you weren’t excited because people snapping photos on their digital cameras might have to print them somewhere.

New competition is rarely a good thing, and for scarce after-tax gambling dollars, horse racing is not exempted. In fact, this is old hat, because we’ve all seen this before.

In the late 1990’s, when slot machines entered racetracks, there was a reason to be positive because horse racing was mandated a big cut of the revenues. Immediately, racetracks with meagre handles and even smaller attendance were worth multiple millions. At some tracks, purses outstripped nightly handles. Slot machines were great for the business of horse racing.

What the sport did not factor in, was just how much the machines would hurt both daily handles and the fan base.

In the only study completed during the slots era, the authors concluded that “pari-mutuel wagering fell 21 per cent when slot machines were introduced.” When table games were added, as they were at some racetracks, handle fell another 16 per cent.

The headlines at the time were about horse racing being introduced to a new market and this synergy resulting in increased handles and attendance. In the end, the exact opposite happened. The machines cannibalized the existing fan and betting base.

This should have been common sense at the time, because we all saw it with our own eyes. In the 1970’s or 80’s, a fan would hit a trifecta on the ‘get out’ last race of the card. They would then make one stop before going home (or out for a celebratory beer) and that was to get a program or form for the next day. Their bankroll was ready to fire tomorrow.

When slots were first introduced, many of these fans didn’t take their nest egg home, they stopped at the machines and tried to get lucky. A few hundred dollars later, the trifecta win was probably but a memory. That’s what happens when you add more competition for the gambling dollar.

I think a strong case could be made that similar will happen with the legalization of sports betting. If you hit a few bucks at the track on a superfecta, are you going home, or will you head to the sportsbook, order a beer and bet Golden State -2.5/-110 in the second half while you watch?

If history repeats itself and horse racing handles fall once again, this time it’s arguably much worse. Sports betting’s passage has not guaranteed even one dollar to horse racing. There’s a chance a racetrack operator or advance deposit wagering company makes some money, but that money is not (at the present time) going to purses like slot winnings did.

This last week was pretty fascinating. For well over a hundred years, betting on the Giants or Cowboys or Bruins was done at the back of the bar, in the shadows. Now it’s out in the open, exposed to millions of new (and old) customers. In my view, this will not be positive for our favorite sport. We’ve added a competitor and are guaranteed nothing in return. That’s not a very good exacta.