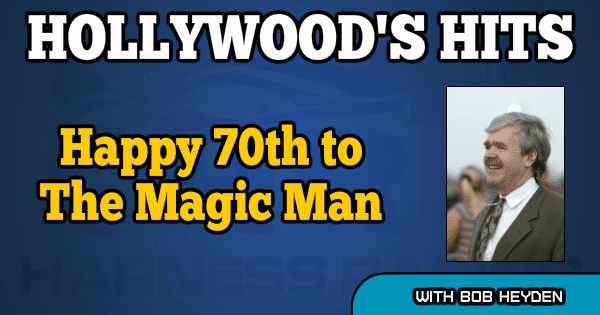 The “Magic Man” hits the Big 7-0 today (May 4). Bill O’Donnell, who was voted into the Canadian Hall Of Fame 32 years ago and was inducted at Goshen in 1990, is alive and well and somehow he’s as relevant — or even more so — than ever before.

Bob Boni raced Nihilator-Pershing Square and a handful of stakes colts with Billy O back in the day.

“The greatest driver I ever saw,” Boni said. “He was like Don Mattingly in his prime-from 1984-1987 or so. The best. The size of the track didn’t matter, trotter or pacer. He was able to control races. At the top of his game, the best.”

Ted Wing was the last driver not named Campbell or O’Donnell to win a Meadowlands driving title back in the day. (Wing won it in 1978 and for the next dozen years Campbell (nine) and O’Donnell (three) shared all 12)

“It was the most unbelievable thing I’ve ever seen. Billy started out with myself and Jimmy Doherty. (In New England) we trained and drove and owned a lot of our horses — Jimmy and myself. But Billy, back in the early 1970s, was reluctant to drive. He didn’t want to make any mistakes. He had no confidence either. It wasn’t until he went to Saratoga in the late 1970s that he turned it on, and never looked back. He then came to the Meadowlands and New York. He was actually turned away from New York initially and that forced his hand to try the Meadowlands in 1979 or so. And he turned out to be one of the greatest drivers ever.”

Billy O’Donnell has too many magical feats to mention in totality, but here are some of the best two dozen in honor of the birthday of one of the best and most talented guys this industry has ever known:

1. O’Donnell won the only two Governors Cups to carry a million-dollar purse — the first two:
1985 with Barberry Spur and 1986 with Redskin.

2. He won with Barberry Spur and Nihilator in million-dollar races in consecutive years 1984-1985 and with them both freshmen, and both sons of Niatross.

4. He drove Park Avenue Joe in the 1989 Dancer — then named the Beacon Course — the week before the horse dead-heated in the Hambletonian with Probe. The reason O’Donnell did not drive him in the Hambletonian? Valley Victory — undefeated at the time (7-for-7 at three) — was the pre-race favorite, but was eventually not entered due to a career-ending virus.

7. Drove Mack Lobell in his first eight career starts in 1986.

8. Did not drive Nihilator in his first eight starts, but then he did every one from then on out in that one’s brilliant career when he retired as the sport’s fastest (1:49.3) and richest ($3.2 million) horse.

12. His final Hambletonian drive resulted in a second-place finish with Pegasus Spur in 2001 — to Scarlet Knight — the favorite. Not bad, especially considering that Pegasus Spur never won in East Rutherford.

17. O’Donnell was second in the 1987 Meadowlands Pace with the grey horse Laag to Frugal Gourmet.

19. He won two Breeders Crowns in the first year — 1984 with Fancy Crown at Rosecroft and Troublemaker at Northlands Park.

20. He won 10 races in a single day on Aug. 16, 1984. Others have duplicated this and done even more, but no one had 10 with two of them being Horses of the Year. He won five during the day at DuQuoin, including Fancy Crown’s 1:53.4 career best (she was that year’s HOY). Then at night, he came to the Meadowlands for five more wins, including the richest ever race with the next year’s HOY, Nihilator, in the $2,161,000 Woodrow Wilson, as well as winning both Wilson consolations.

23. In the 1989 NJSS for sophomore trotting colts, O’Donnell went from last to first — from the half to the three-quarters in a 12-horse field to dominate with Valley Victory.

24. Both John Campbell and O’Donnell debuted in the Meadowlands Pace in 1981… and surprise, they both got money. O’Donnell was second with the favorite Computer and Campbell was fourth with Slapstick.