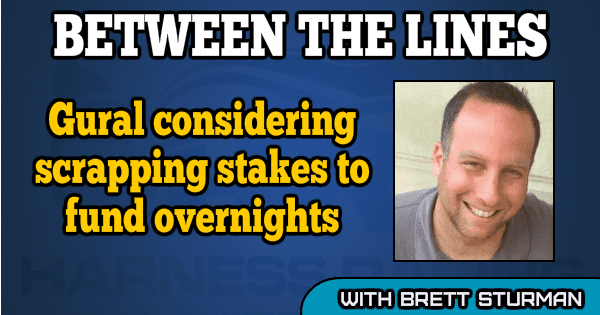 The owner of the Meadowlands Racetrack said he may divert all $4 million currently allocated for stakes into the track’s overnight purses.

In retrospect, last week’s column showing a stronger handle for amateur races at the Meadowlands compared to major stakes races at Yonkers may have been misleading. Sure, there’s something to be said for the disparity in handle between the Meadowlands and other tracks, but in the larger picture the Meadowlands is handling just twice the amount against some tracks that not too long ago it was handling literally 10 times the amount of.

The Meadowlands is far from a model of perfect health, and entries for this weekend at that track point to just how necessary dramatic changes are. Done no favors this weekend by neighboring tracks loading up their cards to accommodate Kentucky Derby patrons, Chester has added a Saturday card of 14 races and Pocono has their annual double header on the same day, sending a total of 23 races to post. As a result, the Meadowlands has just nine races on Friday totaling 66 horses and similar small fields on Saturday over 11 races.

This has forced the hand of Meadowlands owner Jeff Gural to where he’s on the brink of slashing all stakes from the Meadowlands next year, and in turn would redirect $4 million that was allocated to stakes into the overnight program; something once thought unheard of from the “World’s Greatest Harness Track.” This idea isn’t something completely new that we haven’t heard from before from Gural. In the past it’s been seen by some as a threat, but to Gural such a move would be out of necessity – even if it meant causing himself harm as a breeder.

Gural believes that removing the Meadowlands stakes program would kill breeders financially, as the values of yearling at sales would plummet.

Gural said that in terms of proximity, most of the bigger players in the game reside in New York and New Jersey, making the Meadowlands a more desirable location to travel to.

You or I may think that money is money and that it’s all the same whether the check is issued from the Meadowlands or Chester, but Gural sees it differently. For him and other big owners, there is a certain prestige factor involved. There is something far more special for some to win a major race and make it to the winner’s circle at the Meadowlands as opposed to a vacated grandstand at a slot track with no fans.

The way Gural sees it, if not for strengthening the overnight purses to attract more horses, the Meadowlands may not even be able to fill cards this time next year. “We’re already doing 40 horses lower than last year and that year was bad to begin with. If we drop another 40 horses next year that won’t even be enough horses for a card,” said Gural. “So, what I have to do is drop the stakes and divert that money into the overnights from April to July, and then drop the purses back down.” What Gural is describing is similar to what Yonkers does each year when they keep purses lower in the winter, but raises them in the spring as a way to fight competition from other tracks.

The Meadowlands seems to do well in attracting younger horses, and Gural points to a successful Kindergarten series which has drawn a lot of younger horses and hasn’t really cost the track that much to do so. The real issue is attracting the older racehorses, which is tough when there are far more easier options elsewhere in terms of purses and levels of competition elsewhere. Putting $4 million into the overnight program will help attract these types of horses.

Performing a quick back-of-the-napkin calculation, if there were a total of 32 racing cards between April through July (two cards a week for 16 weeks), applying $4 million to those cards would result in a purse increase of $125,000 of added money per card; or almost $10,000 more per race.

Gural sees this move as a way not only to combat ever-increasing competition, but also as a way to attract horses during what he sees as an industry horse shortage, and something that will only get worse. And if there is indeed a horse shortage and it is something that will only get worse, which Gural believes it will, it could be even tougher for the Meadowlands to compete as other tracks may be able to offer higher purses per race if there are fewer races to go around.

Doing away with all major stakes racing including the tracks signature events may not seem as radical an idea as one would think.

Just this week it was reported by fellow HRU contributor Bill Finley at the Thoroughbred Daily News that Delta Downs had decided to not renew it’s $1 million Grade 3 Delta Jackpot Stakes; a stake that had produced Kentucky Derby starters in years past. Along with three other stakes that totaled $850,000 on top of the $1 million Jackpot, local horsemen felt that the money could be better well spent in strengthening the overnight program. It’s no different at the Meadowlands.

When asked if there was anything at this point that would avert the decision to remove stakes, Gural noted that he’s been working hard to convince the state of New Jersey to reintroduce a purse subsidy for the state horse racing industry. In the past, there had been an agreement in place where the state’s casino industry would give the state’s horse racing industry $30 million annually in exchange that the racetracks wouldn’t ask for a casino. Under this past agreement, Meadowlands purses were much more competitive than with what we see today.