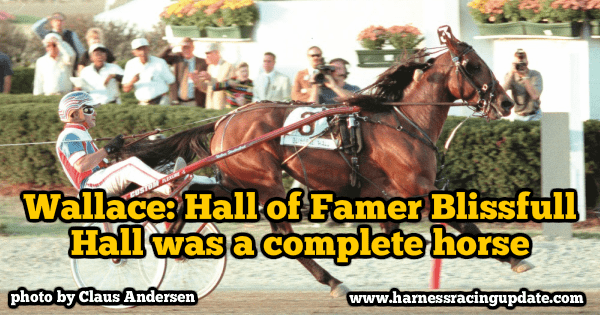 Hall of Fame inductee Blissfull Hall is a complete specimen

Ben Wallace remembers one of his most talented trainees on the news the pacing Triple Crown winner will be inducted into the Canadian Horse Racing Hall of Fame.

When Hip #44 was walked out at the 1997 Tattersalls Sale in Kentucky, trainer Ben Wallace’s eyes widened. All he could muster at that moment – inside his head – was, ‘Wow.’

Before information was readily available at the push of a button or a quick Google search, seeking out a possible standardbred star was based on an old-fashioned, blue collar-type approach to research.

Wallace is certainly glad Quebec-based horse owner Daniel Plouffe did his homework. If he hadn’t, neither man would have been along for the thrill ride engineered by the brilliant Blissfull Hall, a pacer that will be the 2018 male horse inductee in the Canadian Horse Racing Hall of Fame.

“I have to give Daniel a lot of the credit,” Wallace told HRU. “We were looking for a first crop of Cambest and he was a speed stallion. He liked that idea. Daniel had done some research into the mare Hundred Kisses. She had paced a final quarter in :25.4 at The Meadowlands in 1992, which was, at the time, the fastest ever at the New Jersey track. He had found that. This was before there was access to Internet and replays. This was more or less done on his own. Through his research, he found that speed was in this family.”

“He was kind of the perfect horse,” he recalled. “Big, round, strong-looking horse. The hindquarters were the most impressive thing on him. That was the first thing I really noticed, just how strong his hindquarters were – very, very strong. Anybody would have noticed that if they had spent any time on the horse at all.”

On July 4, 1998, Wallace hopped in the sulky for the first of two qualifiers with Blissfull Hall, both coming at Mohawk Racetrack.

Ten days after his July 11 qualifier, the bay would get his first racing test, this time at Woodbine Racetrack.

Sent off at 38-1 Blissfull Hall was saddled with the daunting post nine for his debut. When the gate car sped off, so too did driver Rick Zeron and his longshot partner. In front after the first quarter, Blissfull Hall surrendered the lead, but was two lengths in front at the stretch call. He went on to notch a length win and top prize money of $3,850.

Did Wallace, who would watch Blissfull Hall take the Metro consolation that August at 24-1, chuckle when he saw the final odds on the toteboard for his debut?

“To a degree,” he said. “I wasn’t astonished because I knew he had such inherent speed, but again, there were some decent colts in there that had probably shown more than he did. I was more happy than shocked. I thought we had a serious player. You can train them all you want, prepare them all you want, but once they go out on the racetrack and go that extra mile, then you can start coming up with visions of grandeur.”

Those high hopes were tempered with one significant issue, something Wallace and Plouffe were aware of when the $47,000 purchase was made.

“He was a ridgling when we bought him,” said Wallace. “He always rode one line as a two-year-old. We did all the diagnostic work we could possibly do to find out what would cause that. Even with the one testicle, he showed he was a talented horse. He would get on the right line finishing all the time, but he never indicated lameness. I put it down to that testicle problem. I told Daniel that if he’s going to go on as a three-year-old, he’s either going to have to lose those testicles or the other one has to show up.

“After the his two-year-old year, I took him and another O’Brien winner, (1997 Two Year Old Pacing Filly) Armbro Rosebud, along with my other horses, and sent them to the Meadowlands so that they could winter there. It was a great surface, a mile racetrack and the stabling was comfortable. So we sent them there. I went down in February to train them, just to keep them moving. I looked underneath Blissfull Hall and the other testicle had popped out over the winter. I think if there was one thing that changed him around, it was him becoming a full stallion. Part of his frame of mind was helped by that.”

If the adage that two is better than one is indeed true, Blissfull Hall certainly stated his case for it as a three-year-old.

But on some occasions, it didn’t always end up as Wallace and Plouffe had anticipated. Like on the evening of July 17 in New Jersey.

“We won a Meadowlands Pace elimination on July 10 and he beat The Panderosa (1999 North America Cup and Meadowlands Pace champ),” said Wallace of the nose victory at odds of 27-1. “We drew the rail in the final and never really had a crack at them. If you see the race, (driver) Daniel Dube pulled up with the earplugs still in. There were horses buried the whole mile and he never had a shot at them. I think there was some thought, ‘He’s not as good as they think. He’s a one-trick pony kind of thing.’”

But Wallace knew better. Two weeks later, Blissfull Hall silenced his critics with an absolutely brilliant performance in the American-National at Balmoral.

“He set a world record, track record, season’s record – the whole thing,” he said of the four-length score in 1:49.2. “He beat a two or three-horse entry of Monte Gelrod’s. I said to someone in the winner’s circle, ‘I hope those boys out east realize they got damn lucky at the Meadowlands. If he would have got a crack at them, he would have won the Meadowlands Pace.’”

“It was so hot that day,” he recalled. “It was like 100 degrees with no air at all. So I went back to the barn because I was curious to make sure things were okay. There were people still walking their horses. They hadn’t cooled out yet. Blissfull Hall was standing there with four alcohol bandages on – you might as well have nothing on him – and he was just tearing the feed bucket off the wall. He had cooled himself out. He had been walked. He had hydrated. And there he is, tearing the feed bucket off the wall after racing the mile of his life. I remember looking at his caretaker, Gilles Roy, and saying, ‘We can do all we want, but this is just a good racehorse.’ It was a matter of us keeping him happy and he’d keep us happy.”

And Blissfull Hall undoubtedly did that.

His phenomenal 1999 campaign will forever be associated with his victories in pacing’s Triple Crown events – the Cane Pace at Freehold, the Little Brown Jug at Delaware and the Messenger (Plouffe paid a $35,000 supplementary fee) at The Meadows.

In the Jug, driver Ron Pierce employed a perfectly-timed move with a quarter of a mile to go, seized the lead nearing the top of the stretch, and held off the late rush of Looking For Art to take the 54th edition of the event in front of nearly 52,000 fans.

In what was the Jug’s first raceoff since 1992, Blissfull Hall won by a length as the 4-5 favourite in 1:55.3. The raceoff came to be after Looking For Art’s upset triumph in the second elimination.

“It’s something you’ll never forget,” said Wallace. “He was a gift horse, the nicest horse you could ever be around. Correct. Sound. Willing.”

Blissfull Hall’s stallion career concluded in 2017 after spending a few years at Empire Stallions in Australia. Arrangements were made to have him turned out at Schare Adams’ Saga Farm, not far from where he was foaled at Walnut Hall on March 26, 1996.

And now, he’ll have another home, so to speak, as a permanent member of Canada’s Horse Racing Hall of Fame following the official induction on Aug. 8 at the Mississauga Convention Centre.

“He’s very deserving,” said Wallace. “We’ve all played this game a long time. It’s nice to have a Triple Crown winner and put the icing on that whole cake to have him inducted into the Hall of Fame.”

When asked for one word to best describe Blissfull Hall, Wallace paused briefly before he gave his answer.

“Complete,” he said. “There was nothing lacking. I always look back and I know that he was bought right, he was owned right, he was trained right and he was driven right. It was a situation where we all had a little bit to do, but he made it a lot easier for all of us. It worked out great.”