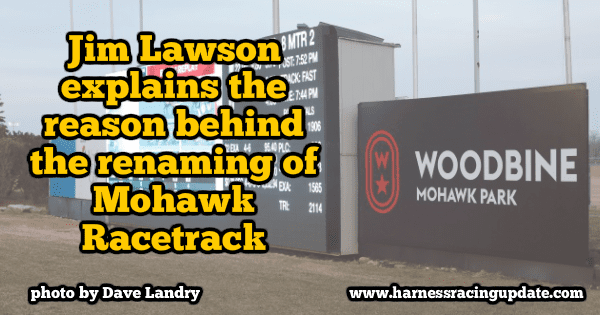 WEG CEO Jim Lawson explains why the name of Mohawk Racetrack has been changed to Woodbine Mohawk Park.

Jim Lawson understands the confusion and sentimentality about the rebranding of Mohawk Racetrack as Woodbine Mohawk Park, but he hopes those that prefer the old name will take a second to understand the bigger picture.

“We all have sentimentality about Mohawk Park. People may call it Mohawk, people may call it Woodbine, but our new customers, international customers, Internet customers… they don’t want to go on the Internet and be confused. And 75 per cent of our wagering is on the Internet. That’s how the world is evolving,” said Lawson, the president and CEO of the Woodbine Entertainment Group (WEG). “Our growth is largely international, that is where we’ve seen the growth, in the United States and Asia and Australia. That’s where we need to take this brand.”

Lawson explained that the name change has been in the works for more than two years and that all great brands have one name — think Apple or Nike or Coke — and a person looking to bet on quality horse racing that has never been to Ontario may not fully understand or care that Mohawk Racetrack and Woodbine Racetrack are two physical locations. To try and brand all horse racing at WEG as being under the Woodbine name is an attempt to build that name as one that represents a quality racing product regardless of the specific location where that racing is held.

“I think that (the Woodbine name) just speaks for itself if you’re going to invest in a single brand in terms of it being world class, in terms of integrity, all the things we think we stand for: world class racing, integrity, big field sizes, great product, great simulcasting, great broadcasting – all the things we want to promote in terms of dependability, safe product, everything that we think is our brand promise out there,” Lawson said, adding the company has created some confusion having a lot of different names for its various departments.

“We have so many brands here that we’re supporting – the Champions brand, the HPI brand, the Woodbine brand, the Mohawk brand.”

Lawson said the point is not to erase the important historical contribution Mohawk has made to Canadian racing and WEG.

“We certainly recognize and respect Mohawk and that’s why you see Mohawk Park and, to a larger extent, it will always be known as Mohawk. We get that,” Lawson said, “but keep in mind that we are trying to promote a brand and (our new logo with) those two little red circles with the dot in the middle… what we’re really trying to do is create something special and invest in a single brand.

“There’s a lot of confusion and expense in the marketplace in trying to promote two brands, so that was really the driving force. These are not things that we took lightly.

“If you’re going to pour a lot of money into promoting that brand… it’s much easier to do that with one brand than two.”