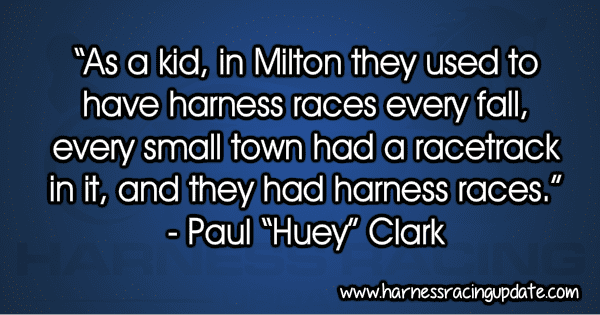 Editor’s Note: In the Jan. 19 issue we published a story about there being a shortage of caretakers in Ontario (full story here). The following is a follow-up to that story.

Ontario’s harness racing industry is not the only one facing a labor shortage heading into 2018. Researchers and organizations across the province’s agricultural spectrum have been sounding warnings about the threat to business growth and sustainability due to a lack of available labor for a number of years and there are no easy solutions on the horizon.

Seasonal employment, the physical nature of the work, limited pay scales and the decreasing rural population have all been cited as causes for the shortage and are all issues familiar to those who work as caretakers in harness racing.

“It’s not just our business from what I hear, it’s a lot of businesses that sometimes the money is basically the same, but there’s a little more work involved,” said Paul “Huey” Clark, who has been caring for standardbred racehorses since he was 15 years old.

Clark, who was the night watchman for On The Road Again and earned the 1989 caretaker of the year award while caring for Matts Scooter, has had a birds eye view to the considerable changes the industry has undergone over the last 35 years. Some of those have had a significant impact on the role of the caretaker — night watchmen are a thing of the past, as is travelling across North America for months at a time with one horse while someone else cared for the two horses you left behind — while others have had a broader effect. In spite of all the changes Clark, who has worked for Rob Fellows for the last 15 years, said he would still make the same choice he made when one of his father Gene’s staff members failed to show up for work in 1981.

“I’ve often said if I was fortunate enough to win the Lotto Max tomorrow night I’d still be shovelling shit,” said Clark with a laugh. “Maybe not every day — it would be my own horses, I’d have enough money to pay somebody so that I could go away here and there — but I’d still like the hands on with the horses, you know they’re all similar, but they’re all different, they’ve all got their own personalities and little quirks and what they like and don’t and this and that.”

That love for horses has kept Clark engaged in the industry through all the ups and downs, but it is something he worries few people today are able to develop.

“As a kid, in Milton they used to have harness races every fall,” said Clark, who grew up in the Campbellville area and now lives outside of Fergus. “Every small town had a racetrack in it, and they had harness races.”

Jeff Baillargeon also grew up in the industry and noted that many of his current co-workers in his father Ben Baillargeon’s operation are rural residents.

“There’s not very much way for outside people to make their way into this business,” said Baillargeon, who worked part-time for his father through his undergraduate studies in history and political theory at McGill University and will be full-time until he heads to the University of Guelph this fall, adding philosophy to the mix before pursing graduate studies.

While he has heard conversations about the cause of the current labor shortage, ranging from the loss of the dormitories at Mohawk Racetrack to the changes in the business that have made catch paddocking more lucrative than working during the day as a caretaker, Baillargeon has given the issue a great deal of thought and thinks the issue boils down to money.

“I feel like it’s very reductive to say it’s just money at the end of the day, but you need money to live at the end of the day, and if you’re kind of living on a very low budget it can be really disheartening, so why would you bother doing this?” said Baillargeon. “It’s long hours being a groom for a racehorse, it really is. A horse is an athlete and you’re like their physiotherapist and their parent and their best friend. It’s emotional as well as physical.”

The 23-year-old Guelph resident believes an adjustment to the way purse money is allocated could solve the problem, either by increasing the percentage paid to trainers, enabling them to increase the amount they are able to pay staff, or by directing a percentage directly to caretakers.

“I feel like to be able to consistently have a good big barn, you need to have a sustainable economic plan to a certain extent,” Baillargeon said. “I think it’s a very lucrative business, but at the same time my mom always told me that in this business you can be a hero and the next day a zero, and it’s very true, and I think the nature of things being so precarious also makes people, you could say less compassionate, less willing to share.

“I mean it’s the same thing in the world outside of horse racing, it’s a very precarious existence and it breeds a little bit of antagonism and wariness of the other. Whereas, like I said, a more root analysis of the problem, if you redistribute money — and one of the options which I think is very good is to actually take money directly from the purses to the groom — I think eventually you get a change in attitudes when everyone feels like they’re being taken care of.”

Considering the labour shortages agricultural business are facing all across the province, the idea of directing money directly to caretakers may boost the industry’s appeal to young job seekers, like the 40 University of Guelph students currently pursuing an education in the equine programs at the Regional Equine and Agricultural Centre of Huron (REACH Huron).

Teesha Symes, who was honored with the 2016 O’Brien Award as caretaker of the year while working for Dr. Ian Moore and has recently struck out on her own with four horses, has already discovered another potential solution during her short tenure as a trainer. The Cambridge resident has a high school co-op student starting with her when the second semester gets under way.

“He’s from Waterdown with zero ties to the industry,” said Symes. “He just happened to go to the races one day and his dad’s like, this kid loves it, like he loves it.”

The young man volunteered his time with Janice Hubbard through the summer and fall and moved over to Symes’ stable when Hubbard left for Florida with the Moore string. Since then Symes said he has not missed a race night and handled the barn chores while she spent some time with her family in Nova Scotia over Christmas.

“He did my horses, by himself. He’s in Grade 11 and I trusted him fully because he just loves the game, he got bit by the bug,” said Symes.

“Working in Florida with Ian, you see all kinds of people, like grooms, coming from the streets and being taught. That doesn’t happen a lot in Ontario, you don’t see people starting out. And I don’t know if it’s because the trainers aren’t as open to that, they want the best help and the best groom, well you’ve got to start somewhere, you have to bring them up, right.”

Symes has also chosen not to buy into the pessimism that has dogged the industry since the end of the Slots at Racetracks Progam (SARP). The 28-year-old has set her sights on a career in the business and she is confident that her hard work and passion for the game will lead to success.

“You listen to the older folks and they’re like, ‘Oh you should go home and get your life together.’ My life’s together, I’m in the Dominican,” said the vacationing Symes with a laugh. “I am training my own horses, and doing well, and here I am in the Dominican. If you want to put your head down and work, yeah sometimes it’s six, seven nights a week, but there’s all kinds of opportunity.”