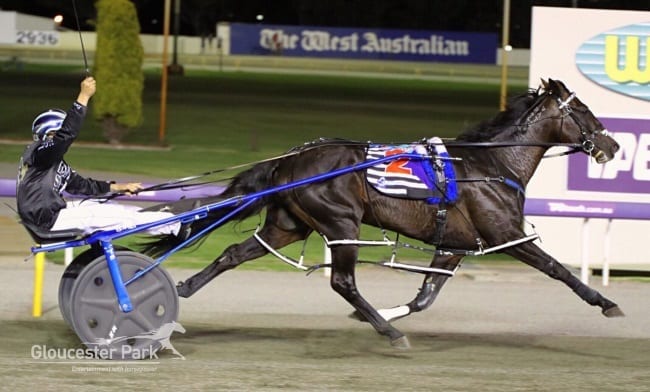 The top horseman and his trainee, a son of Bettors Delight, were instrumental in resurrecting the southern hemisphere classic with a dominant performance in Perth where the Inter Dominion started back in 1936.

Arguably the best pacer in the world, 5-year-old Lazarus may also be the richest son of Bettors Delight anywhere on the planet.

With his victory at Gloucester Park in Perth, Australia on Friday night, before a crowd of some 9,000 fans, the New Zealand champion captured the $1.1 million TABtouch Inter Dominion final (watch replay here). The win increased Lazarus’ career earnings to $3,317,139 (Australian dollars) and improved his lifetime record to 33 wins and seven placings in 40 starts.

Taking currency rates at par, Friday night’s first prize of $605,000 saw Lazarus surge past the North American trio of All Bets Off ($2.9 million), Darlins Delight ($2.9 million) and Bettor Sweet ($2.78 million) to become the richest of Bettors Delight’s progeny anywhere in the world (though, using current conversion rates, Lazarus’ earnings in U.S. dollars are about $2.5 million).

Bettors Delight sired half of the 10-horse field that faced the starter on Friday night and three of his millionaire sons filled the placings.

Settled by his trainer/driver Mark Purdon as the field was released, Lazarus wasn’t part of the early charge for the front which saw pole-marker Tiger Tara hold the lead comfortably from WA star Soho Tribeca before handing up as 2015 Inter Dominion champion Lennytheshark went around the field to the breeze position.

At the end of the first lap of the half-mile track, Lazarus left a trailing position to move around the field to race outside the leader for the balance of the 2,936 metre (1 3/4 miles) race.

In a masterful exhibition of reinsmanship, Purdon controlled the race and even when in a position to surge past Tiger Tara with 400 metres to go he opted to hold his charge back to the field to ensure that Western Australian champion Chicago Bull remained in a pocket until the field turned for home.

As the field straightened, Purdon lifted the reins and Lazarus surged away from his rivals to win untouched by four metres after the last lap of the half-mile Gloucester Park circuit was covered in :54.6 seconds (:27.4, :27.2).

Chicago Bull finished strongly for second ahead of a tiring Tiger Tara, while the locally bred outsider Vultan Tin, courtesy of a superb drive by Chris Voak, finished well into fourth place.

Lazarus was heavily supported into favoritism at $1.90 while Chicago Bull was a solid second favorite at $4.10.

“He is the best horse I have ever trained,” Purdon said post-race. The horseman’s sense of relief as Lazarus cruised to the line was evidenced by an uncharacteristic salute at the finish of the race.

“He (Lazarus) was right in the zone tonight and he was bolting. He is just a champion.”

Three years ago, the future of the Inter Dominion was in doubt as funding the race was in question as was the traditional concept of three nights of heats across a week followed by the final a week later.

Four starts at the top level was seen as too tough for most modern day horses for a race concept that had begun in Perth in 1936.

The Inter Dominion has always been seen as the ultimate test of the ability and endurance of the horse and the skill of the trainer in managing his horse through the four starts in a fortnight.

Mark Purdon, who represented New Zealand in the World Drivers Championship in Canada earlier this year, has proved beyond doubt that he is the best horseman of any code in the Southern Hemisphere.

He brought Smolda to Perth in 2016 on what he readily described as a reconnaissance mission for Lazarus in 2017. He bypassed the 2016 Inter Dominion with Lazarus as he believes the concept is too taxing for a 4-year-old.

Purdon timed the preparation of Smolda perfectly and the gelding peaked on Grand Final night to down the raging favourite Hectorjayjay following a superb drive from Purdon.

Despite outward appearances, Purdon does have a cheeky sense of humour as exampled by a response to a journalist who asked what he had learned with the Smolda experiment.

Purdon eschewed the traditional Inter Dominion functions such as the Barrier Draw, Golf Day and Ball preferring to spend time with the four horses he brought to Perth on his second trip west.

After the efforts of the Victorian-trained Lennytheshark in 2015, and the superb double engineered in 2016 and 2017 by Mark Purdon, the Inter Dominion is well and truly back in its rightful place as Australasia’s premier harness race.

Western Australian fans were bubbling post-race when Purdon announced that Lazarus will remain in Perth with the $300,000 Fremantle Cup and $450,000 WA Pacing Cup on Jan. 12 and 19 as his targets for renewed clashes with Chicago Bull and Soho Tribeca.

It was also announced that Lazarus’ stablemate and fellow 2017 Inter Dominion starter Have Faith In Me had been sold to do his future racing in North America. Have Faith In Me is Australasia’s fastest ever pacer following his 1:47.5 win in the 2016 NSW Miracle Mile.

Purdon left for New Zealand Saturday morning for a 26-day stewards inspired holiday following last night’s Golden Nugget final win with Ultimate Machete (see sidebar), but he will be back in Perth after his All Stars Stable campaigns at the Auckland Cup carnival.

Initially, the Inter Dominion rotated between the six Australian states that conducted harness racing along with the North and South Islands of New Zealand.

In recent years, the cost of conducting the Inter Dominion has seen most states opt out of the championships after Perth held the 2012 series.

The New South Wales Harness Racing Club held the race in March in 2013, 2014 and 2015 before Western Australia won the tender for the championship for the next three years.

After the original concept had been altered to allow for a single heat in each state and New Zealand followed by repechage heats in NSW, Western Australia with the financial support of the state’s controlling authority held a $1.8 million series and $1.3 million final in November, 2015.

The series has remained at $1.8 million for each of the three years in Perth, but the stakes for the heats were adjusted upwards and the final reduced to $1.1 million following industry feedback.