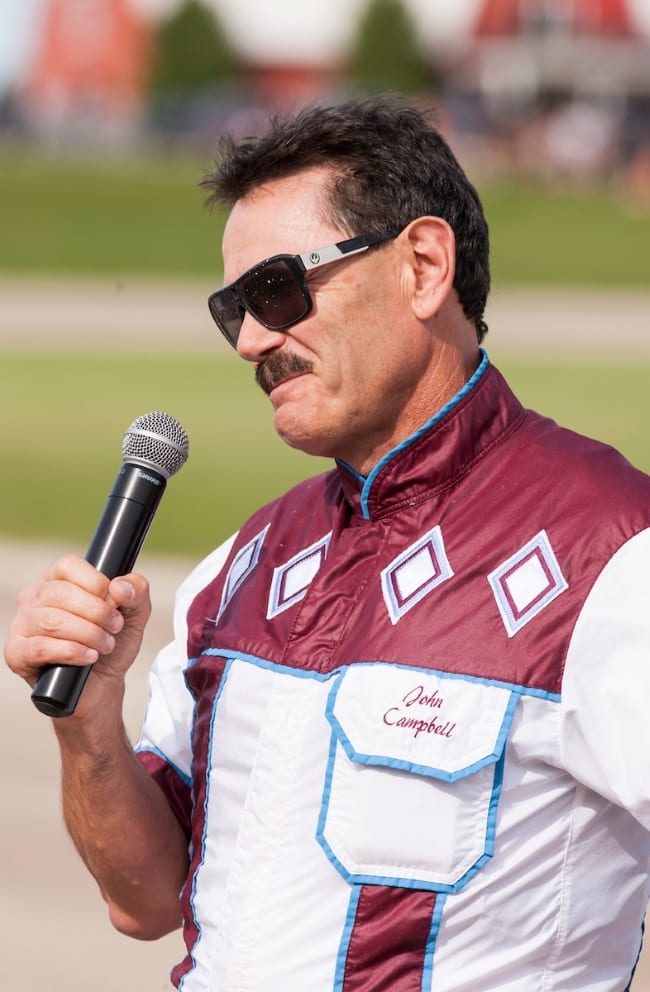 John Campbell gives thanks and an apology

It’s been a year of great reflection for the five-time Hall of Famer who received a tremendous outpouring from fans when he retired from driving.

John Campbell wants you to know he is humbled and thankful and overwhelmed and sorry — yes, sorry.

It’s been a year of deep reflection for the sport’s richest, most decorated driver; a man who was feted at three racetracks after announcing he was retiring from his work in the sulky after collecting nearly $300 million in purse earnings, 10,688 victories and more than 230 major stakes wins over a 45-year career.

“I got all kinds of cards, texts, emails. The response was overwhelming and humbling. People reached out in every way, shape or form and all of it was so positive, I really can’t express enough how good it made me feel,” Campbell said. “Also, to the fans that came out to the (retirement events at the) Meadowlands, Goshen and Clinton, those days were just phenomenal days for me, with experiences that I’m going to take with me for the rest of my life. And, my family, they just enjoyed them so much. All of those racetracks and the horsemen’s organizations — I was recognized by Woodbine and Western Fair — so I just want to thank everyone and point out how appreciative I am of all of the accolades that I received.”

Never being one to look back much on his career because he was too busy looking ahead to the next race and next top horse, Campbell said he was genuinely surprised when countless people approached him or sent him messages this year about how much he had impacted their lives.

“I was really overwhelmed by how I affected some people’s lives, the notes and some things that were written up over the year… that part, you don’t realize how your actions, good or bad, affect people sometimes. I just feel very fortunate that the people reached out and relayed those thoughts back to me,” Campbell said.

It goes beyond the fact that Campbell is Canadian where “sorry” is a part of the lexicon.

He wants you to know he wasn’t always the ultimate good guy and ambassador, particularly in his younger days when the competitive fires burned white hot.

“There were times in my career when I wasn’t as nice. I could be rude or sarcastic or short with people and I would thank those people for not reaching out (now),” Campbell said, laughing. “I know there were times, especially when people caught me after a race that didn’t go the way I hoped, I could be out of sorts, to say the least. So, I thank those people for not pointing out a lot of that and I apologize to anybody that I did offend… I hope people realize that it was in the heat of the moment and it certainly wasn’t personal in any way, shape or form.”

As for his second career, Campbell said he’s busy on many fronts at the Hambletonian Society.

Recently, he’s been working with Trackmaster to develop a new universal classification system for horses in an effort to help card the most competitive fields possible to better appeal to bettors.

“It’s based on the horse’s most recent performances. Under the algorithm that the Trackmaster people have come up with… every horse would have a number based on what his history was and then you could just group the races based on the horses that had the most similar numbers. You’d take your top 10, then the next 10 and move on down the line,” Campbell said. “I don’t think this would be perfect in any way, shape or form, but I think it has potential to be better than what we’re doing right now. We’ll see. I’m talking to the race secretaries and some are very in favor of trying it, but we’re not to that point yet.”

He said the classification system is designed to augment what race secretaries do, not replace them.

“(Race secretaries) are still in the equation. In order to make the races equitable, when you run into a shortage of horses, they are still going to have to handicap horses by post and it’s a system that they could override at any time if they saw an inequity with a horse that was in too easy,” Campbell said.

His other project is to establish universal rules across all harness racing jurisdictions. He said that task will take years to complete.

“We put a handful of rules out for the USTA to adopt, and they’ll vote on those in March, but those are just a small sampling. It’s the light lifting and I’m telling people that the heavy lifting is still to come,” Campbell said. “We’re going to all get together for meetings in the first part of January at the Meadowlands and we’re going to have two days of sitting down and trying to get the rest of this stuff hammered out… Then it’ll take another year to go back to the USTA, but at least it’s progress.”

After universal rules are adopted at the USTA, the industry can then start lobbying the major jurisdictions to try to get them to officially adopt the same rules.

“There’s no question, getting the states to agree on anything universally is difficult. That will be the hardest part, but, you know, it’s something that I feel is worth pursuing,” Campbell said. “It’s one of those things that I don’t think everybody is going to adopt it right away, but if we can get a block of states to do it then we can build around that into the future. That’s my hope.”