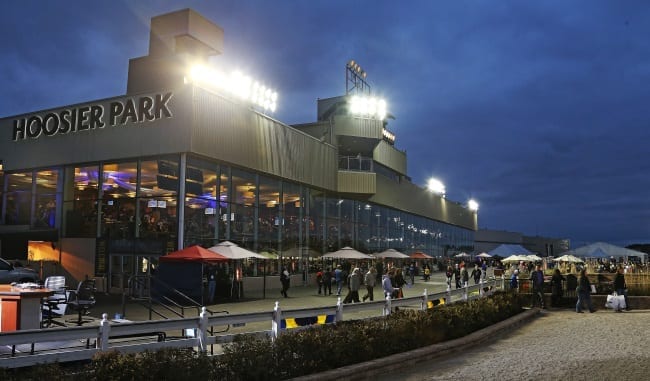 A thorough breakdown of the big winners and big numbers from the 34th Breeders Crown held Friday and Saturday at Hoosier Park.

Rick Moore, the operational head of Hoosier Park (and good handicapper), said months ago that the theme for the Breeders Crown at Hoosier would be “It’s Indiana’s Time.” And it certainly proved to be a prophetic statement, especially in Saturday night’s Breeders Crown races, as state-sired trotters and pacers won half of the six contests for males.

Sire Swan For All accounted for two of the Indiana wins. One was little surprise at all, as champion mare Hannelore Hanover once again beat the boys in the Crown Open Trot. She gave Yannick Gingras four of the seven Breeders Crown driving victories to that point, and Ron Burke a second – he would later win with the star-crossed 3CT What The Hill to tie Jimmy Takter at three Crown victories for the year/weekend.

The other Swan For All winner was Fiftydallarbill (2CT), whose victory was worth $300,000 to the record of 71-year-old trainer Bill Crone – that amount raising his LIFETIME earnings by 10 per cent — in 1:55.

The third Indiana-sired Crown champion was Beckham’s Z Tam, sired by Always A Virgin, the sire of the sport’s fastest horse, Always B Miki (1:46).

John Mellencamp, a famous and proud son of Indiana, may have sung of coming from a “small town,” but Indiana is no longer a “small town” on the continent’s breeding scene.

The top drivers for the weekend were the leading money winner in North America and the leading driver at Hoosier Park – Yannick Gingras and Trace Tetrick each won five times over two nights.

Gingras added to his Crown wins with Manchego, Ariana G, and Youaremycandygirl on Friday with the above-mentioned Hannelore Hanover Saturday. In addition to guiding these four ladies home, he also drove Jug winner Filibuster Hanover to win in an undercard stake. From that contest, Fear The Dragon was scratched sick.

With the defection of Fear The Dragon, his stablemate Downbytheseaside could have taken over the money lead among all North American harness horses in 2017, but he was caught by Beckham’s Z Tam in a scintillating :26.2 sprint home.

Trace Tetrick added to the list of contenders for the Harness Writers’ Rising Star Award, which as recently as six weeks ago looked to be a potential field of one – Toronto sensation Louis Philippe Roy. But then Andrew McCarthy won the Jugette with Caviart Ally, wound up regularly driving Grand Circuit horses from Grand Circuit trainers, and climbed to fourth in the standings at Harrah’s Philadelphia (arguably the best driving colony in North America – let the flame wars begin!). And now Trace Tetrick had his “coming-out party” in front of a national and international audience.

He won with Blazin Britches (3FP) on Friday, and on Saturday added Fiftydallarbill to bring his number of Breeders Crown victories to three. It’s not likely to stop there. In addition, Trace won three overnight races, including two for horses trained by his brother Tom T. Tetrick. Trace’s total tally for the two days at Hoosier was 17 5-1-1-$628,010, putting him second behind Gingras. David Miller also broke the half-million dollar plateau, at $556,512.

We should note that these figures might be off by a thousand or two here and there, because the Indiana series paid all the way down, and at times appeared to deduct money from the upper spots to do so. But you’re just getting the general feeling here – USTA numbers are always the final arbiter.

(Wait a minute, you might be saying – isn’t there another Tetrick brother?) Well, Tim had one of the unluckiest streaks ever in Indiana this weekend. On Friday, he got one check in nine drives, and on Saturday, he hit the board once [Lindy The Great, 3CT]; summary, 18 0-1-0-0-2. The “proper,” positive takeaway was the fact that his drives earned $155,045, which means he earned about $7,700.

As far as the vaunted Ron Burke-Jimmy Takter battle, it ended up (almost) honors even. Both won three Crown races – Takter with the terrific trio of misses Manchego, Ariana G, and Pure Country, and Burke with Youaremycandygirl Friday and then a double Saturday in the Crown, with Hannelore Hanover and What The Hill coming home first. Crown total figures preliminarily total to be Takter 11 3-0-3-$879,100, Burke 12 3-2-1-$1,217,617. Counting all of the Burke horses at Hoosier this weekend, the record was 25 5-6-5-$1,312,839.

Quite a few of the Hoosier-based horsemen came away with two winners on the weekend, with Bill Crone, as mentioned, and Jamie Macomber mixing a first Crown win with an overnight race.

Hanover Shoe Farms is the breeder of Hannelore Hanover, so they got a record 24th Breeders Crown title, and resumed their lead over Brittany Farms by two.

Muscle Hill picked up a third siring credit on Saturday with What The Hill – two in New Jersey and one in Pennsylvania.

Two siring victories were achieved in the 12 Crown races by Swan For All, as mentioned, Rock N Roll Hanover, and Somebeachsomewhere.

This may be a good symbol of frustration – the 11 AEs for Saturday’s Crown races that did not get in have seasonal earnings combined of $2,141,777. That’s a lot of talent to be on the sidelines. And if you were of a mind to add Fear The Dragon’s money into that group, you’d get $3,406,168. “All dressed up and nowhere to go,” indeed.

Even though the temperature was still listed as 38 degrees on the Saturday charts, the rain had passed through and the track was rated “fast” all night. And three Hoosier track records were broken or tied Saturday:

Filibuster Hanover was first-up in a non-Crown event, winning his Pegasus stake event in 1:50, equaling the local mark for 3GP; Stay Hungry equaled the track record for 2GP with his 1:50.4 win, and he also equaled the national season’s record; nd in the last Crown race, the lightly-raced Spilt The House established a new mark for older pacing geldings when he won in 1:48.1.

When it was sloppy on Friday, four of the six Crown races were won by favorites, but when the track was fast on Saturday, only one chalk came in – Hannelore Hanover. In the 3CT, International Moni was favored by $38 over winner What The Hill, both going off at 7-5 (we noticed the odds, but thanks to Dave Brower for mentioning the amount on TV).

For each night, Friday had half its chalk tally in the 14 races, while on Saturday only five of 14 favorites could get home first.
Post four was the big winner for the weekend: