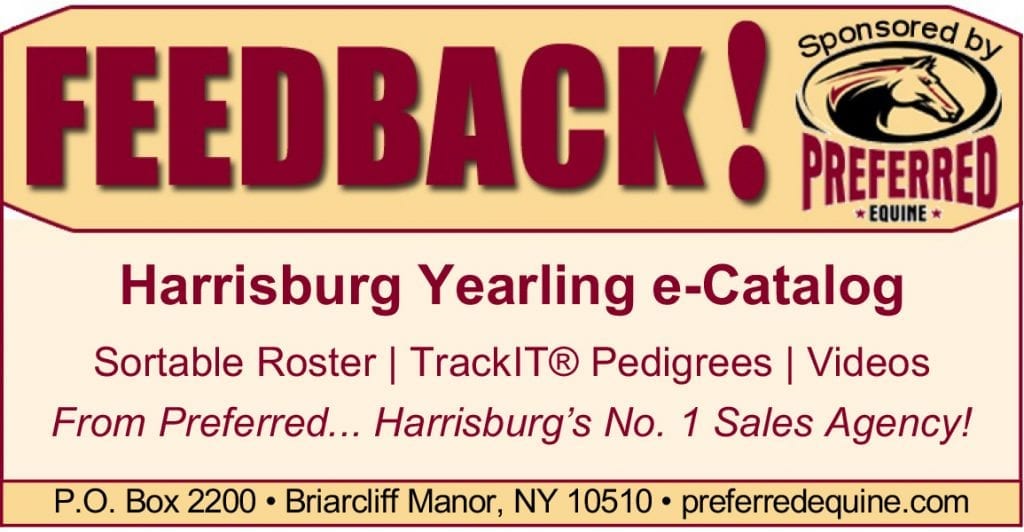 It is unfortunate that Howard Taylor again avoids the reality he finds inconvenient in stating that Lady Shadow is for sale because the owners are not able to race her in “our own names”. Here are the facts: Lady Shadow was barred from racing at the Meadowlands in August following a disqualification for a positive test in a major race in Pennsylvania. Mr Ron Adams was her trainer. She didn’t race in the Artiscape at Tioga because Mr Adams was not an approved trainer there. Subsequently, WEG made her participation in the Milton Stakes conditional on a trainer change. The owners named a trainer of their choice who was approved by the AGCO judges. Lady Shadow raced in the names of her current owners and finished fifth in the elimination and sixth in the final which were notably poorer results than most of her races over the prior two years and many levels short of some of her widely heralded (particularly by Mr Taylor) facile wins and “stunning” performances. In one interview Mr Taylor credited her excellence to her love for her stall at Mr Adam’s training center. She was returned to Mr Adams for races at Red Mile and Hoosier Park.

Perhaps Mr Taylor meant to state that the current owners believe that Mr Adams and his colleagues are the only acceptable managers if the current owners were to retain and race Lady Shadow. Perhaps they find the scrutiny and industry discussion unacceptable. Perhaps they didn’t like losing in her last six stakes starts. Perhaps they only want to race at 1-9 rather than 4-1. Perhaps they simply wish to exit. Only he and his co-owners can tell us if those are their concerns. He is wrong , however, to claim that he and his co-owners are not able to race her in their well-known names. He is correct that six of the seven highest purse events for aged pacing mares are raced at the Gural tracks and Mohawk. Reality does not always evade his grasp!
Obviously, well wishes are extended to them on a sale or decision to retain Lady Shadow.

— Clay Horner / Chairman of the Board, WEG

Ignore public feedback at our peril

The tracks have had their chance(s) to improve the racing for their fans. Their apathy speaks volumes and the fan and handle drop-offs are a direct reaction to their unwillingness to make sweeping changes. Today’s bettors are a lot more savvy than customers of the ‘70s with technology that enables frame by frame reviews of races as well a multitude of viewing angles. And, an understanding of the business aspects of the racing game.

So are we getting the quality and integrity we are paying for? We see inept judging that refuses to follow any type of uniform racing rules. We see fines assessed in dollars instead of thousands, so who is watching out for us? Recently we saw the best thoroughbred in the world take a dive and save the track from a large negative show pool and the trainer’s response to the horse’s performance was to say that the horse didn’t feel like running on this day. The response on Hannelore Hanover’s poor performance recently was that – we tried new shoes that night and the horse didn’t like them. Does the horse’s world-class trainer really think we would buy that he would make this significant of a change without first testing in a training session?

Frankly, I see way to many negative factors that are turning me and others in a different direction for entertainment, so keep looking the other way and ignoring the public feedback and back-sliding will continue. There is an old saying ” I Have Met the Enemy and He is I” that still applies.

Let me first start by saying Hoosier Park did a great job and this complaint isn’t pointed at them. The Crown eliminations is what is wrong with harness racing today. Drivers aren’t competitive enough to care about the bettors or the owners and trainers they are driving for. Out of the 21 eliminations not one horse was hung out if it left the gate. Holes were given to everyone and with front end speed being so dominant most races looked like Saturday morning qualifiers. Horses were driven to try and make it into the finals and not to win the race. Nine horse race to eliminate one is an embarrassment. Six and seven horse fields to eliminate one or two with everyone just trying to get fifth or better can’t happen if we want to grow the handle. If the judges aren’t going to enforce the rules and the drivers aren’t going to race competitively than the Hambletonian Society needs to act. I would suggest higher purse money in the eliminations (which would lower the final purse) and everyone races for there positions. The winners can pick their posts and then second place finishers and so on. These won’t fix the problems completely but it would be a step forward till the drivers decide that competitive racing is best for everyone.

(Full column here) Dean, You make some great points about our BC vs the thoroughbreds’ BC. No matter how good the show is, our (harness) card is hardly bet-able. There is simply no value. Watching the Takters and the Burkes get their pictures taken race after race may produce some feel-good stories, but it does nothing for my wallet. I guess I could hammer $100 exactas all night, but I usually need a Crown Royal or two when I push dollars like that through the window, and that would make for a long, long night.

Case in point, I live in Michigan and my father (an avid thoroughbred player) and I spent last week at Keeneland. I urged him to have us stop at Hoosier on the way back, Friday night for the Crown elims and after a few races, he said to me “I don’t think I like this elimination thing. No value. No fun. I’m going to bet Lone Star and Retama for the rest of the night, you have a ball.” Ouch, but he was right. I spent the rest of the night trying to catch prices at Hoosier and I got steamrolled.

The thrill of the three Triple Crown races for thoroughbreds has a bit to do with history and a lot to do with the incredibly competitive fields that often produce monster payouts. Since the inception of the Breeders’ Cup, the thrill has been the same… amazing, wild, monster payouts. I have hit half a dozen signers on exacta bets on Breeder’s Cup races. I used to know a guy in Ohio who bet all / all / all trifectas in every race with more than 9 starters on BC day. On many Cup days, he was even after the second race. Most years he made a PILE. Can you imagine betting all / all / all trifectas on a Breeders Crown day? Dear God, you’d be a fool to even consider such.

I am on board with you that what the Breeders Crown needs are more lucrative betting opportunities. I disagree, however with having the track fund superfecta pools and other wild gimmicks. Those bets only benefit the lotto players and they aren’t horse bettors, nor will they ever be.

Every casual horse bettor that I know chucks in a few bucks on Derby Day, on Belmont Day, Preakness Day and on the Breeders’ Cup races. I haven’t met a novice yet who has an interest in our game who wants to bets pentafectas. The game is confusing enough to a newbie. All of the onerous calls that I get on Derby day are friends asking me to bet a $10 exacta box or $20 to win on their top choice.

In my humble opinion, pentafectas and super-jackpot one-ticket winners have made our sport even less attractive to new blood. It’s just too much. They get overwhelmed and head back to the blackjack table…where things are simple. Picking a winner is tough enough for me, and I’ve been around, ya know?

Somehow we need to find a way to entice new blood. I don’t dispute that. What I can say is that pentafectas, t-shirt giveaways and rock concerts are not the answer. These methods have already been tried and not only have they failed, they have run off many core bettors who feel completely disrespected by the money that flows in odd directions while those of us who show up at the track 3 or 4 times a week are completely left out. We core bettors, after all, are the ones who pay the light bill. Support US, throw us some bennies and maybe we can bring new blood around. Disrespect us, ignore us and we won’t bring anyone around. God forbid, we may even start spending time with our wives.

Whatever you do with the above musings, please note that I was at Hoosier last Friday, the 20th, to catch some elims and that place is awesome. Even though they have a casino, they are totally horse-race focused and the place is clean, the staff is friendly to a fault, the food is fantastic and the prices are very reasonable. Note also that Hoosier and Indiana racing started from almost nothing 20 some years ago. While Michigan and Illinois racing have both tanked in the worst way, Hoosier has thrived. The simple explanation for this is slots, but not so fast. Hoosier was up and coming even before they got slot money. Indiana racing was in the same predicament as Michigan and Illinois for almost eight years before they got slots and they still figured things out. You can thank Hoosier’s GM Rick Moore for that. Rick is the man behind Hoosier’s success through thick and thin. Rick is the reason that the Crown races are at Hoosier this weekend. He is too humble to accept appropriate praise, but he deserves it. Ask around, if you are there…ask his staff….they are all devoted to him because he is a complete class-act. How often do you get to say that about anyone in the industry?

Keep up the good work, Dean!