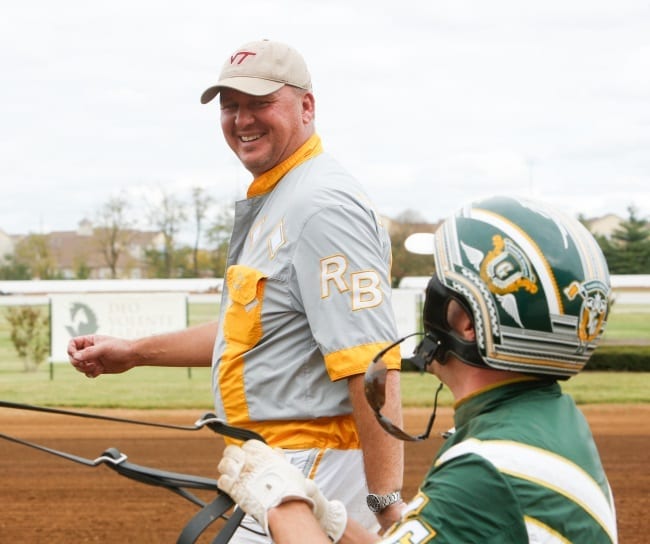 Breeders Crown by the unconventional numbers

A different take on the Breeders Crown being held tonight and tomorrow at Hoosier Park.

When breaking down the Breeders Crown, any numerical discussion in the last decade usually deals with how many horses top trainers Ron Burke and Jimmy Takter have in, and how many as favored to win their divisional prizes.

On Saturday, Burke now has seven horses in, with the scratch-in of Gural Hanover in the OHT; he has three in total in that event, including favored Hannelore Hanover as the mare tests the boys. Takter has five, including two in both the 2CT and 3CP; Burke’s other four for Saturday are in different events.

So between them, the two top trainers have three favorites, all of them trotting females, although Hannelore Hanover will be taking on the boys. It may be coincidental — or not — that Yannick Gingras is scheduled to handle the three favorites of the two trainers.

In all, Burke has a total of 12 horses in the Crown events, Takter nine.

Of course, those totals refer to Hoosier’s weekend racing only in the Crowns. Takter has no other horses entered in any “outside” Hoosier races, while for Burke it is, as usual, a slightly-different story. Tonight, he has four horses entered on the undercard, for a total of nine on the night, while on Saturday he has nine trotters and pacers in the supporting races, meaning that 16 Burke horses will be in action at HoP Saturday. Total count at Hoosier for Burke this weekend: 25 horses going gateward.

Takter has no other horses racing anywhere in the U.S. tonight and Saturday – by now you’re figured out that that won’t be the case with Burke. Tonight, his barn will start 17 horses – nine at Hoosier, four at Yonkers, three at Philly, and one at Freehold. Saturday figures to be an even more demanding day for his bookkeeper, as the gray and gold have no fewer than 32 horses entered in the U.S.: half at Hoosier, plus five at Yonkers, five at Pocono, five at The Meadows, and one at Northfield.

Yannick Gingras and Tim Tetrick have drives in 11 of the 12 Breeders Crown events this weekend. Tetrick did have a mount in all 12, but Pasithea Face S was scratched from the OMT. Gingras will be missing from the OHP.

Next in line is David Miller, with 10 drives booked. What is interesting about Miller is that neither he nor his horses will see the righthand side of the Crown starting gate all weekend! He has two PP1s, three PP2s, two PP3s, and one trailing PP10 – all on the lefthand side of the gate – and his other horses both start from PP5, right in the middle of the gate! In contrast, Gingras and Tetrick will see the righthand wing of the gate four and five times, respectively. (So you might want to take Miller in the “Trakus least distance covered” pool. But for how much of an “advantage” this may be, see the Post Position stats at the end of this article.)

Gingras is listed behind the most morning line favorites with three – the three trotting misses split between the care of Burke and Takter, as mentioned above. Brian Sears and Scott Zeron both have two morning line choices (Zeron has eight drives overall, Sears six.)

Miller is one of five drivers who also is listed behind a favorite (Rainbow Room) – but he was originally listed behind another chalk, Dealt A Winner in the OHP, but he opted to stay behind the other elim winner he drove, Mach It So, who is the second choice.

The other drivers with favorites are Tetrick, Daniel Dube (5 Crown drives), and the two “AM”s: Andrew McCarthy and Aaron Merriman, each of whom has two Breeders Crown horses.

2017 Hoosier Park driving statistics of those drivers with favorites:

The participating driver with the greatest statistical chance to go undefeated in his Crown drives is Trond Smedshammer – he has only one drive, Phaetosive, who is 9-5 behind the 6-5 favorite Manchego.

The real surprise among this sextet is that only two of them are favored for their Crown championships: Fourth Dimension and International Moni (who wasn’t even faster than What The Hill). The matchup favorites for the other three, from top to bottom, are Rainbow Room, Dealt A Winner, and Manchego. Note that David Miller is not driving the favorite in the OHP, but a horse who tied a track record.

It’s also interesting to see both two-year-old filly events being categorized as basically head-to-head showdowns: Manchego (6-5) vs. Phaetosive (9-5) in the trot, and Rainbow Room (8-5) vs. Youaremycandygirl (9-5) in the pace.

The first six in the above list are favored in their Crown divisions.

9. Huntsville is retired.
3. Fear The Dragon, ranked #1 going into the weekend, did not qualify for the 3CP Championship. But he will race at Saturday at Hoosier, in the “13th Breeders Crown race,” the sixth race, the $60,000 Pegasus Stake.

Number of seasonal earners of $1 million going into this weekend: three.

Number of seasonal earners of $1 million going into this weekend who will be racing in the Crown events: one — Downbytheseaside (the others are Fear The Dragon and Huntsville).

Number of horses who could join the $1 million 2017 earnings club with a high finish: 1. (Ariana G). She is currently #5 in seasonal earnings; #4 Devious Man also did not make his Crown championship.

Number of winners of $500,000 this year racing on Saturday’s card: nine (includes Downbytheseaside; does not include Fear The Dragon).

This means that the elimination winners got to draw for the seventh, sixth, fifth, second and first-best posts, according to 2017 Hoosier Park statistics. (This, in its general application during the racing year through stakes, claiming handicaps, etc., might be a topic at the upcoming annual Race Secretaries’ Conference).