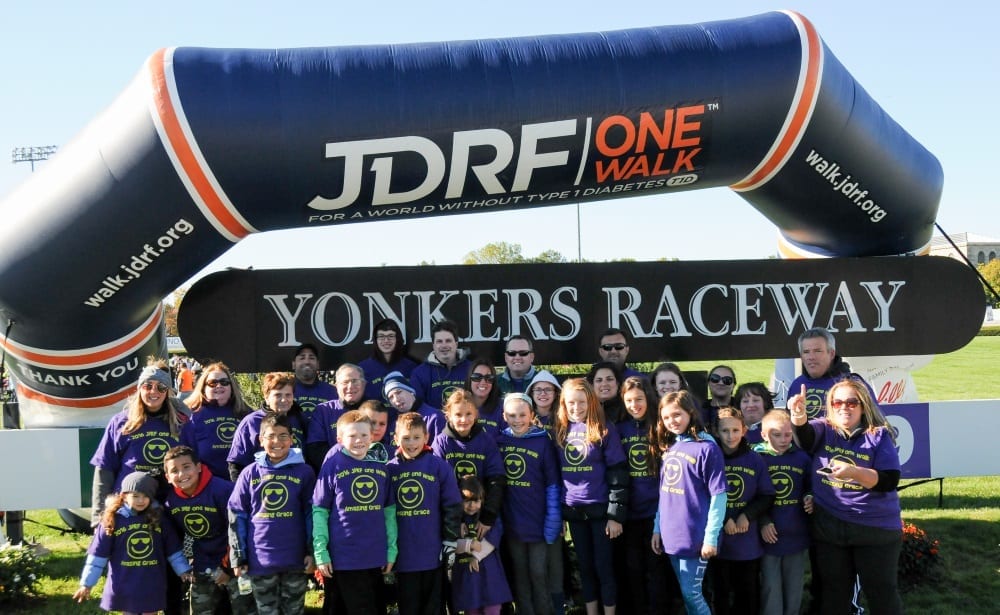 Yonkers comes together to walk for a cure

Sunday’s three-mile walk will raise money to fight Type 1 diabetes, the disease that has changed the life of GM Bob Galterio’s daughter, Cara.

The fight against Type 1 diabetes has become a community venture at Yonkers Raceway.

The half-mile track is expected to play host to approximately 2,000 participants for a three-mile walk on Sunday (Oct. 22) to raise funds for research aimed at curing the disease. The event has generated more than $2 million in donations since it was first held at Yonkers five years ago.

The cause is particularly dear to Bob Galterio, who oversees the racing operation and adjacent Empire City Casino as vice president and chief operating officer. His daughter, Cara, was diagnosed with juvenile diabetes in 2000. She was nine years old.

“Personally, I appreciate the support,” Galterio said, “and professionally I feel our team is very conscious about the conditions some people find themselves in.”

Not long after Cara’s illness was discovered, Galterio and his wife, Maggie, brought together family and friends to walk for a “Cure for Cara.” The effort, previously held at several other venues, expanded dramatically after it shifted to Yonkers.

“When we started doing it here at Empire City, we started really engaging our employees, which we have almost 1,300 of,” said Taryn Duffy, director of public affairs. “What we found was so many of our employees had personal connections to this disease.

“We started having them write the names of the people they were walking for, whether it was friends or family, and we put those in the hallway for our employees to see. They saw this was something we were doing that was directly impacting them. It is not just one member of the Empire Casino family being impacted, it is hundreds.”

Duffy was referring to Type 1 Diabetes in general. When it strikes a juvenile, it can be particularly difficult.

Maggie will never forget her anguish when Cara was found to be ill.

“I couldn’t even talk to anybody,” she said. “Any time somebody would call me, the relatives, I would burst out crying because it was so devastating.”

Cara understands that there are many people who must deal with far greater adversity. But she said of life with diabetes, “I’d give my arm to get rid of it. It’s something you have to deal with every single day, every single hour even.”

When Cara was younger, her mother was almost obsessed about caring for her. Getting the proper amount of sleep became difficult, if not impossible.

“I give Maggie all the credit for this,” Bob said. “She was up all the time checking her in the middle of the night. It changes your life around significantly.”

For Cara, now 26, everything about juvenile diabetes was life-changing, down to the college she chose and the man she married. She wanted to enrol at a school in Maryland. Her anxious mother pushed her to opt for Fairfield University, because it was located 35 minutes from their home. She would only be a drive away if medical issues arose. Cara slammed the door in frustration when she told her mother she would agree to attend Fairfield.

Cara now acknowledges that the decision, however grudgingly it was made, could not have worked out better. For it was at Fairfield that she met Michael Buckenmeyer, now her husband. Their first child, a healthy son named Gallus, was born on May 25.

Michael never viewed Cara’s diabetes as an obstacle in their relationship because his sister, Erin, received the same diagnosis at a young age. His goal since he was a boy has been to help find a cure, and he is pursuing his doctorate in biomechanical engineering at the University of Pittsburgh.

“He’s on such a mission,” Maggie said. “I wouldn’t be surprised if he helped find it.”

Cara and others already have benefitted from greatly improved monitoring equipment. Other advances are being made.

“We are getting to the day – it’s not tomorrow – but we’re getting closer to the day when we can eradicate this disease,” Bob said.

Cara, her husband, their infant son and Otto, their 98-pound Bernese Mountain dog, will be coming in from Pittsburgh to walk the track where standardbreds usually pace or trot. They have come to treasure the annual show of support.

“It’s kind of overwhelming,” Cara said. “It’s really emotional to see so many people wanting to make a change.”