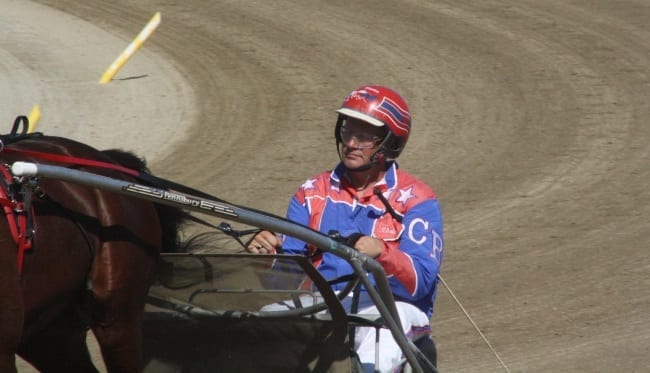 As the Ohio stakes season comes to a conclusion, trainer Chris Beaver looks to add to his record season be sending seven postward tonight in the $400,000 (div) Ohio Sire Stakes Consolations at Northfield Park.

Beaver, 45, has recorded a career-best 137 wins and $2.4 million in earnings this season thanks to the depth and talent of his Ohio-breds, including Dekeyser and Berazzled.

Dekeyser (post #2; Aaron Merriman) is looking to complete an Ohio ‘end of season’ trifecta with a win in the three-year-old colt trot and has been tapped as the 3-2 choice.

The son of Dejarmbro–Pink Ribbons won the $40,000 Buckeye Stallion Stakes Final on Sept. 30 and the $25,000 Ohio Fair Championship on Oct. 7, both at Northfield Park.

“I left him out of the last few legs of the sire stakes because I had three in there that were better than him and I wanted to get into the consolation,” said Beaver. “He’s gotten better and better. I guess you can say that it all went according to plan, because is this what I was hoping to do, to get into all those finals at the end of the year.”

Dekeyser has won 14 times in 23 seasonal starts and has earned $98,365 this season. He is owned by Beaver, Synerco Ventures and Steven Zeehandelar.

“Bugs MVP was the best lately,” said Beaver. “I turned her out for a week because I didn’t think she would get into the consolation and she did, so we brought her back in. She could be a bit short. She was a little better than California Love as they raced together one-two in the (Buckeye) Stallion Series final.”

Bugs MVP is out of the first crop of My MVP and was bred by Chris’ mother Johanna and Dr. Barry Carter. She has won seven of 11 starts and has made $48,542 for Johanna Beaver, Michael Carter, Joe Sbrocco and Zeehandelar.

California Love is by Stormin Normand and out of Frannie’s Ridge and has earned $38,502 for Christopher Beaver, Zeehandelar, Synerco Ventures and breeder Marion Beachy.
Although he has made a name for himself in the trotting circles, included in Beaver’s OSS Consolation entries are a pair of pacers led by Berazzled in the three-year-old filly pace.

The daughter of Charley Barley—Razmataz Hanover will race for the third time in the past eight days. Berazzled finished third in a $10,000 late closing event at Red Mile on Oct. 6 and was a solid second in the $50,000 Circle City at Hoosier Park on Oct. 12, pacing her last quarter in :25.4.

“(Racing her on Thursday) was the owner’s decision. He wanted to race in both. We talked it over and he made the decision,” said Beaver. “She is very fast and they kind of went a training mile to the three quarter pole. A short field and obvious favorite on the front end, so it was a training mile with a fast last quarter.”

Berazzled, the 2016 OSS two-year-old champion, joined the Beaver barn in mid-August and has recorded a 2-2-1 mark in her five starts with Beaver.

“I put her on Lasix and I tightened the hobbles,” said Beaver “I noticed that she looked like she would get a little bit out of rhythm when she got tired, so I took the hobbles up a little bit.”

When asked if he was going to work with more pacers in the future, the Delaware, OH native noted that he will remain cautious with his spending limits.

“I have been trying to find some pacers but I haven’t found any yet,” said Beaver. “I would only like to have Ohio-breds. It seemed like anything that I liked brought more money than I was comfortable spending.”

Also on the Saturday night Northfield Park card is the $120,000 Courageous Lady for sophomore pacing fillies. The field of eight will be headlined by Bettor’s Up (post #6; Brett Miller) and Ella Christina (post #3; Tim Tetrick).