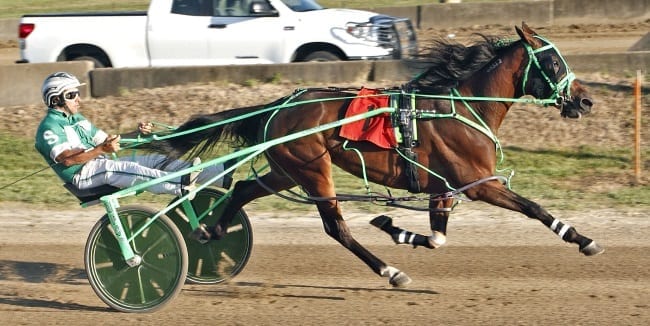 Kurt Sugg will send out Da Vinci Artist and Momentsoffire on Saturday in the finals at Northfield Park.

Trainer/driver Kurt Sugg has toured the state of Ohio competing at county fairs from Ashland to Wooster. Thanks to his hard work and the success of his stable, he has two morning line favorites in the $200,000 (div) Ohio Fair Championships Saturday night (Oct. 7) at Northfield Park.

The daughter of Art Official–Da Vinci Road has won 14 times in 26 seasonal starts, including nine wins in 11 starts at the county fairs.

“(Da Vinci Artist) is not a very big filly, she’s kind of little, but very good gaited and kind of quick,” said Sugg.

Da Vinci Artist owned a seven-race win streak, including winning efforts at Marion, Cortland, Hilliard, Bucyrus and Painesville, completing an undefeated July. She earned her two most important fair wins at Ashland and Wooster, the home fairs for her owner and Sugg.

She was purchased at the 2015 November Blooded Horse Sale as a yearling by owner Robert D. Corbin.

She competed in three legs of the Ohio Sire Stakes, finishing third, third and fifth against the top level of sophomore filly pacers in the state.

“The draws are what hurt her in the sire stakes. She just didn’t draw very well,” said Sugg. “She will race in the ($50,000) consolation of the Ohio Sire Stakes next weekend and she will shut down for the rest of the year.”

The freshman daughter from the first crop of Winning Fireworks out of KT Pricelessmoment has a 4-3-3 record in 17 seasonal starts.

“She’s kind of a big filly,” said Sugg. “I wish she didn’t have that many starts, but if she didn’t she wouldn’t have made the finals. She just squeaked in with her last start (a win at Dover on Sept. 24) to get into the top nine.”

She took her 2:00.3 mark in the July 12 leg of the Buckeye Stallion Series leg at Northfield Park.

“The draw is really going to help her a lot. Last weekend she had the seven hole in the ($40,000 Buckeye) Stallion Series (Final) and she didn’t fare so well,” said Sugg. “The competition may be a little easier this weekend and the rail isn’t going to her any.”

Momentsoffire was purchased in July by John Schlabach, Walnut View Farm and Stebe Mullet from Aaron Yoder. Yoder purchased her as a yearling for $4,300.

Carmensdaleyapple, a two-year-old colt pacer, will be looking to run his undefeated streak to 17 straight. The son of Mr Apples—Mydaleybread must overcome the outside post number 8 for driver Pierce Henry and owner/trainer Joe Paver.

The sophomore colt trotter, Dekeyser won the $40,000 Buckeye Stallion Stakes Final last weekend and has been installed the 3-5 morning line choice from post. The son of Djarmbro—Pink Ribbons has earned $110,289 for his owners, Synerco Ventures, Steven Zeehandelar and trainer Christopher Beaver.