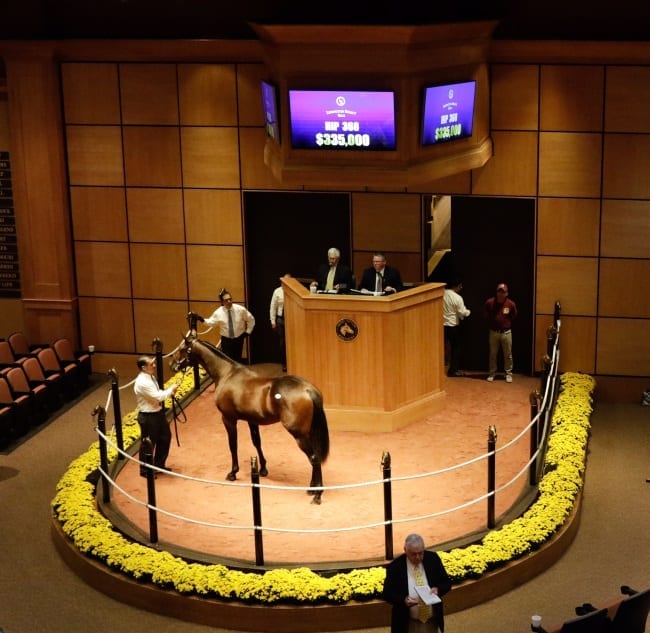 Owner Ken Jacobs bought a Muscle Hill colt out of Missymae Bluestone during Thursday’s third sale session. It is the second highest-priced yearling to sell, so far, this year at the Lexington Selected Yearling Sale

Just one day after announcing he got his (undisclosed) price to syndicate Walner to stand stud at Southwind Farms in New Jersey, owner Ken Jacobs of Baldwinsville, NY was back buying trotters at the Lexington Selected Yearling Sale trying to land another Hambletonian hopeful.

Jacobs topped Thursday’s third session of the five-night sale being held at the Fasig-Tipton Pavilion in Lexington, KY when he paid $335,000 for Southwind Bugz, a Muscle Hill colt out of Missymae Bluestone.

The price is the second highest of the sale following the $480,000 spent by Swedish agent Robert Lindstrom during Wednesday’s second session to buy the Muscle Hill—Sina filly named Beautiful Sin from breeders Jeff and Paula Gural and Monica Reschke and consignor Northwood Bloodstock.

As the name suggests, Southwind Bugz was bred by Southwind. The colt was consigned by Preferred Equine, which, through the first three sessions of the sale, held a large lead over the consignor standings with nearly $7.5 million in gross sales, so far.

Toscano said Southwind Bugz, “stood well and was a nice mover… and is, basically, the whole package.

“I didn’t think he would sell that high but I leave those decisions to Ken. I’m looking forward to training him.”

Reid said he thought Southwind Bugz would sell well, but it is very hard to predict exactly how well.

“I’m not shocked, but it was a pleasant surprise for (Southwind). There were four major players in on that horse and it was kind of a sleepy type of horse on the third night, but that was by design to be here. Physically, he stood out – right spot, right night, but, more importantly, he was the right horse. He was going to sell well, wherever he sold. It was good to have him tonight and put a little energy into the crowd.”

Reid said Jacobs is making a statement with the purchase.

“He wants to win the Hambletonian and by picking a Muscle Hill, it’s probably a good place to start,” Reid said. “It was a good, spirited bid and it ended up going Mr. Jacobs’ way and I wish him the best of luck and hopefully (Southwind Bugz is) a champion.”

“The (increase in) average is interesting, because we’ve sold more horses this year,” said Reid who manages the sale with Randy Manges. “We’ve sold 411 vs. 378. That’s 33 more horses. It continues to be good, right across the board. We said, right from the get-go, that we had a very deep catalogue and this carries forward and kind of supports our claim. I was happy to see a good night again.”

Ranked by gross sales, Reid’s Preferred Equine has nearly a $3.6 million lead over second-place consignor Kentuckiana Farms through three sessions. Preferred has sold 112 horses and averaged $66,929, while Kentuckiana has sold 50 horses for $3,898,000 total and averaged $77,960.

“It was a little bit of a different crowd and I actually thought the Canadian trotters, especially, were received quite well between the E L Titans, the Archangel and Royalty For Lifes. There was definitely a good Canadian feel and I expect that to continue the next two nights,” Reid said.

Manges said he was “really pleased to see how strong the Ontario-bred yearlings sold.”

“I think, more importantly, it’s the number of horses (Toscani) is buying not the gross dollars, even though they are both very impressive,” Reid said.

Quebec’s Determination Stable is fifth on the buyer list with $790,000 in purchase, just slightly ahead of Quebec’s Team Allard which has spent $780,000 to buy 10 yearlings.

“Overall, it seems like there’s been good flow and the numbers have supported that and I’m looking forward to (tonight) and Saturday night,” Reid said. “There’s a lot of nice horses and there’s a nice mixture. It’s a very healthy environment right now and that’s great to see.”