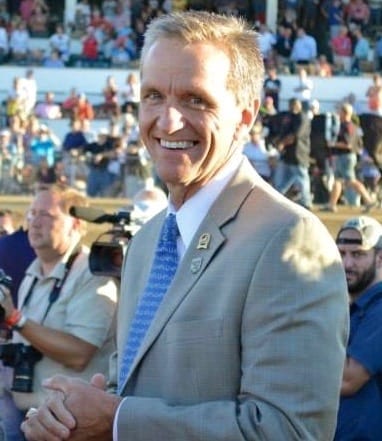 Little Brown Jug Society president Tom Wright talks about eliminating the race-off and other changes that may come.

Among the many things harness racing and its governing bodies are known for are their resistance to change, so it came as a surprise when the Little Brown Jug Society decided to eliminate its winner-take-all third heat, given how rich in tradition the society and its marquee event, the Little Brown Jug, are.

Now, instead of winning twice on the same day, the Jug winner need only hit the wire first in the final.

“It came after years and years of thought,” said Tom Wright, president of the Little Brown Jug Society. “I’m a traditionalist in the biggest sense there is, but we obviously had a great deal of opposition to the potential of a horse having to go three heats. We felt it was time to change.”

Wright, 55, has seen it all when it comes to the Jug. He was on the society’s board of directors for 22 years before being elevated to president in 2012. “We had a debate that lingered for three-to-five years on this topic,” he said. “We felt it was the right thing to do for the sport, the industry and our event. For me, most important is the animal. He’s got to come first. There was a time years ago when people went two and three heats out of necessity. That’s not the case today. Speed has changed the breed dramatically. With speed comes potential wear and tear on the animal, and the last thing I want to do is damage an animal. That’s the number one priority.”

Clearly, Wright and the LBJ Society board members decided it was time for a change, but he admitted it took time for him to agree with the switch.

“I have not always been on the side that wanted to get rid of the third heat,” he said. “I was a traditionalist to begin with. I learned from (grandfather-in-law) Hank (Thomson) and (father-in-law) Tom (Thomson). The most important thing in any business is to listen. So we listened to what owners, trainers, spectators, officials, veterinarians, everybody had to say. You have to listen. You don’t want to make a hasty decision. You want to make the right decision. The Jug Society is made up of 25 directors that are knowledgeable and together we made that decision. The vote was not unanimous, I don’t know the exact count, but it was heavily favored.”

Today’s Little Brown Jug will be the 72nd. The first 71 had the race-off in the conditions. Everybody knows about Rome and how it wasn’t built in a day, so while it was huge to get rid of the race-off, why not also stipulate that if only eight horses drop into the Jug box (which is the case this year) that the event becomes one dash for the cash, rather than have an elimination that does no eliminating (Instead, the order of finish in the 16th race only determines post positions for the 20th race final.)?

“That’s a good question, a great question,” said Wright. “The answer is the fan. As long as I’m not doing damage to the animal, the fan loves (having the elim). Why do I get 40-50,000 people around a little Ohio county half-mile track? Because the fans love the horses. They enjoy watching the athlete and the thrill of the comeback. The excitement of it that builds is like none other.”

We explained to Wright that with this format, the elimination, which goes for a purse of $188,928, might see horses not raced as aggressively as they figure to be for the $401,472 final.

While the days of getting 24-30 horses to drop into the Jug entry box are likely a thing of the past, Wright says the society was prepared in the event of a small turnout.

There are horsemen who are opposed to the multiple heat formats that are slowly but surely being phased out of the game. Ray Schnittker has made his opinion clear on the issue, which is why one-third of the sport’s superstar 3-year-old colts, Huntsville, will not be at the Jug. (Fear The Dragon and Downbytheseaside will be there.)

Now that Ohio has alternate gaming, could the Jug bolster its purse moving forward to get the horsemen who might otherwise skip the event because of the multiple heats or small track size to reconsider?

“I asked John Campbell about it,” said Wright. “And the best line I ever heard, John told me ‘If you get the purse to a million, we’ll race up and down Route 23.’ We want to get the purse for the Jug to $1 million, no question about it. The Ohio Harness Horsemen’s Association is helping us. They have contributed a great deal of money to the Jug and all of the races at Delaware. And we are grateful beyond belief. We are going to need more sponsorship and potentially maybe change the payment structure. All of those things come into play. We have a goal to get to a million. I get reminded of it almost daily.”