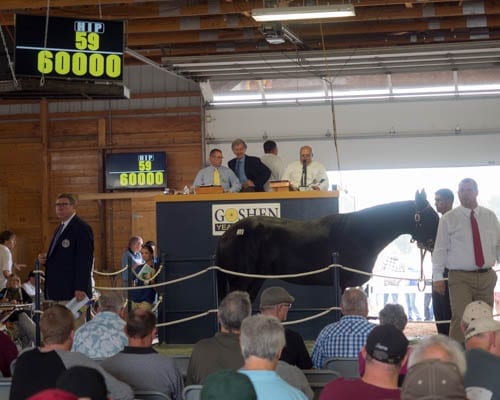 The 2017 sale will be held Sunday at the Mark Ford Training Center in Middletown, NY beginning at noon.

Goshen Yearling Sale president Bob Boni said anyone looking for horses would be wise to check out this year’s sale to be held Sunday (Sept. 10) at the Mark Ford Training Center in Middletown, NY beginning at noon (check out http://goshenyearlingsale.com for detailed sale information).

“Some pretty good horses have come out of (this sale),” Boni said Friday. “I think that’s what every buyer is looking for… the ability that when they go to the sale they can get a colt or a filly that’s going to be competitive in the regional stakes or beyond that. Last year we sold a couple. Just off the top of my head, Natalie Hanover, a Chapter Seven filly, set a track record at Batavia this year. She’s won $50,000 or so.”

“Scuola Hanover, an A Rocknroll Dance filly sold for $12,000 last year. She’s made over $100,000 and she was just second in the Pennsylvania Finals (to Rainbow Room),” Boni said.

He also mentioned Hurricane Shorty, a winner of more than $110,000 with a record of :55 on a half-mile track that was purchased (under the name Compatible With U) by John McDermott’s Hurricane Racing for $8,000 at last year’s sale.

Venier Hanover is also a successful Goshen Yearling Sale graduate with wins in 10 of 16 starts and earnings exceeding $75,000. The gelded pacer was purchased for $7,000 at Goshen in 2016 by Mitchell York of Cranberry, PA.

Finally, Boni mentioned Lioness Hanover, a daughter of Somebeachsomewhere that sold for $8,000 last year. In July, Adriana Sorella purchased the filly and told HRU he paid $100,000 for her.

“There are all kinds of opportunities for people here,” Boni said. “We’ve had a lot of winners, a lot of stake horses come out of the sale. Anybody who is in the stakes business… and you see it with Blake Macintosh or Anthony MacDonald or Ake Svanstedt. They all showed up last year and I think every one of them has bought stakes winner out of the sale.”

This year, 112 yearlings — many by major consignors such as the sport’s two biggest farms, Hanover Shoe Farms and Winbak — are scheduled to go through the auction ring.

“The question of ‘Why are they selling here’? There’s a lot of reasons why. It’s not because of lack of quality,” Boni said. “Very often they are being sold because it’s two months earlier than Harrisburg for a seller. That’s two month less of keeping a horse around. There are consignors, like Hanover, that have an abundance of yearlings that they have to sell at a number of different sales. Likewise, with Winbak and Steve Jones.”

Boni said the sale mix is similar to last year.

“Obviously, the bulk is northeastern-type horses. I’m anxious myself to see the first Sweet Lou and the first Captaintreacherous. These will be the first being sold as yearlings, which is interesting. I don’t think anybody expects them to be anything but well received and it’ll be interesting to start off selling the first two,” Boni said.

Boni said the weather forecast for Sunday looks terrific, “and that’s always a big plus for us. It’s always a concern every time you have an outdoor sale, but the forecast is very good, nice fall weather.

“The location is great, it’s an hour from the Meadowlands and just a little more from Pocono and the various training centers. There’s no excuse not to participate.

“It’s a nice, easy day. We start at noon and you’ll be out of there by 4 o’clock and hopefully you’ll end up with something that will do some good for you.”