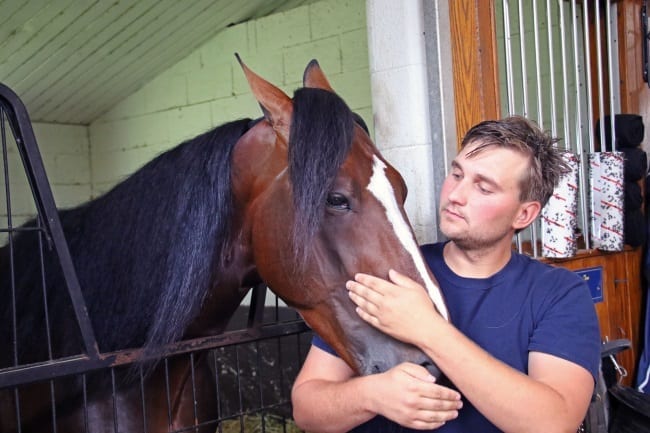 The 25-year-old trainer will send out Long Tom and Enterprise in today’s $1.2 million Hambletonian 16 years after his uncle, Stefan Melander, pulled off one of the most legendary victories in the race’s history.

Marcus Melander was nine when his uncle pulled off one of the most incredible feats in Hambletonian history, so forgive the young trainer for being a little hazy on the details. Still, he was old enough then to know Stefan Melander’s victory with Scarlet Knight was beyond legendary, particularly in their native Sweden.

“I remember only little bits, but not too much,” said Marcus, who will send out Long Tom and Enterprise in today’s Hambletonian and try to further the family legacy. “It was huge in Sweden when he won. Of course it was big (in the U.S.), too. A Swedish trainer and driver that won with an American horse.”

In November of 1999, Stefan travelled to Harrisburg and purchased Scarlet Knight (Pine Chip—Ruby Crown) as a yearlings for $17,000, flew the trotter home to Sweden to train him and returned to North America a few weeks before the 2001 Hambletonian to take on North America’s best three-year-old trotters.

“We don’t have much two-year-old racing in Sweden and (Scarlet Knight) didn’t come to Sweden until January as a two-year-old,” Marcus said. “He only had two starts as a two-year-old, very late, but I guess, because he staked him, he did know he had a good horse.”

Stefan became the first person to prep a horse in Sweden that won the Hambletonian. But the story gets even more incredible. Not only did Stefan — who is predominantly a trainer — drive his own horse to victory in the Hambletonian, he did it just three years after being led away to a holding cell by a New Jersey State trooper. Stefan, whose talents include equine photography under the name Photo Tarzan, was nabbed after running onto the track to try to get a photo of the 1998 Hambletonian winner Muscles Yankee.

“With this guy being a photographer and not really a driver… that’s like someone coming down out of the press box and deciding to drive and win the Hambletonian. It’s a fluke, fluke thing and will never happen again,” Hambletonian Society publicity director Moira Fanning told The Canadian Sportsman in 2012.

To further quote that same article written by Lauren Lee, “And so it went that a European photographer who was nearly expelled from the property in 1998 returned just three years later with his very own undefeated, American-bred, Swedish-trained horse that he would drive himself — despite having driven on only two previous occasions stateside — to victory in harness racing’s biggest event… Europeans celebrated, photographers rejoiced and Stefan Melander posed for pictures and walked anywhere he pleased around the Meadowlands with its greatest prize in his hands. He became the first horseman to bring a U.S.-bred trotter trained and developed in Europe to the U.S. and win the Hambletonian.”

No wonder, Stefan’s nephew, Marcus, said he has been following these big global stakes races since he was a little boy.

“So, it’s very big to be in the race with two horses that actually can win,” Marcus said of Long Tom and Enterprise. “They are not just in there to be in the race, they really have the chance to win so that’s huge.”

Despite being just 25, and in just his third year with his own stable, Marcus said he’s been very calm this week.

“I feel that I have the horses how I want them. They’ll be 100 per cent on Saturday and I don’t think I need to do anything more. Now it’s up to the race, how it will turn out and how Timmy (Tetrick) drives,” Melander said.

Tetrick will pilot Enterprise from post six in one of today’s eliminations and Long Tom from post eight in the other.

“They both trained (Wednesday), their last miles before the big race, so they’ll jog a little bit (Friday) morning and then they are ready to go,” Marcus said.

“I haven’t done anything specific with them since they raced the last time. They are both good athletes and I’m very happy with them, so far, so I haven’t changed anything.”

“Then, he’s beautifully gaited. He’s got both heart and lungs, but his attitude (is his strength),” Marcus said of the son of Muscle Hill—Ilia owned by AMG Stable Oy of Vantaa, Finland. “Here at home, he’s so quiet on the track. You don’t have any worries when you are training, he won’t go faster than 2:50. Then, if you have the whip and ask him, he goes. When it’s the race, he’s a completely different horse. That’s because he’s a good horse. He can be so relaxed here at home and then when he’s racing he’s a completely different horse.”

Enterprise became sick while racing in Canada, but Marcus said the son of Chapter Seven—She’s Gone Again owned by Courant Inc. of Delray Beach, FL, is “a very strong horse, maybe not the fastest one that can go :26 quarters, but it feels like he could go :28, :28, :28:, :28 for a very long time. He’s very strong, so that’s what I like about him.”

Marcus said he got his start working for his uncle Stefan for five or six years.

“He taught me almost everything, but it’s so different here with the two-year-old racing because we don’t have that in Sweden so much,” Marcus said. “When I came over and worked for Jimmy (Takter), that was the biggest difference. He taught me a lot about how to get a two-year-old ready. You know, buy a horse in Harrisburg in November and have them ready to go :58 or :59 in June. I didn’t learn that in Sweden, because (racing young horses) is not so big over there.”

Interesting Stefan Melander and Jimmy Takter are the only trainer to have harnessed a Hambletonian, Prix d’Amerique and Elitlopp winner.

Today, Stefan Melander trains some 130 horses at home — too many to allow him to away to come to the U.S. this year to cheer on his nephew in person. Some say winning the Hambletonian with Scarlet Knight 16 years ago was the key moment that launched Stefan Melander’s career.

Marcus Melander would be beyond delighted to follow his uncle’s trajectory.