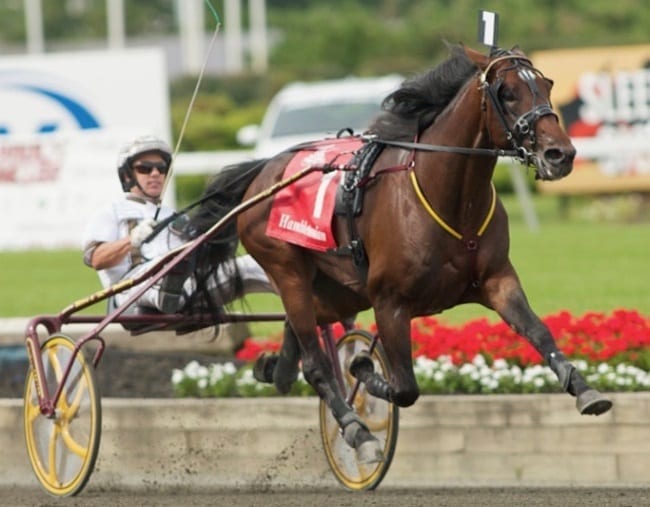 Breaking down the Hambletonian Oaks field.

This year’s Hambletonian Oaks might well be renamed the Muscle Hill Oaks as five of the 10 finals are daughters of the remarkable young stallion that stands at Southwind Farms.

What Muscle Hill has accomplished in his brief stud career is staggering and the best may be yet to come. Remember, he’s only 11 years old and he still holds the record for the fastest mile ever in the Hambletonian when he jogged home a winner in 1:50.1 in 2009.

The influence of the patriarch Muscles Yankee (1998 Hambletonian winner) in this year’s Oaks comes primarily through Muscle Hill, but Caviart Wonder is a daughter of Muscle Massive, while Magic Presto is out of a daughter by Muscles Yankee himself.

Although his five starters are out of mares by four different stallions, there is a strong connection among the broodmare sires of the Muscle Hill starters.

Two — Dream Together and Dream Baby Dream — are from mares by Andover Hall.

Southwind Avanti is a Muscle Hill filly from a mare by Windsong’s Legacy, a son of Conway Hall (brother to Andover Hall).

Caviart Wonder by Muscle Massive is out of a mare by Conway Hall.

The affinity of Muscles Yankee blood for mares by the “Band of Brothers” (Conway, Angus, and Andover) is obvious.

Favored Ariana G, however, is by Muscle Hill out of a mare by Cantab Hall, who is by Self Possessed.

Andover and Cantab each have two broodmare sire credits, while the others are claimed by the aforementioned Conway Hall, Windsong’s Legacy, Tagliabue, Donerail, Pine Chip, and Muscles Yankee.

Two states — Kentucky and New Jersey — were the birthplaces of more than half the Oaks field.

Ariana G, Southwind Avanti, and Feed Your Head are Jersey girls while Dream Together, Sunshine Delight, and Overdraft Volo are native-born Kentucky gals.

The other four fillies were born in Pennsylvania (2), Florida and Ontario.

March was the birth month of four of the Oaks fillies, with Ariana G and Southwind Avanti being foaled only four days apart in New Jersey.

There were two fillies foaled in late May, often a penalty against yearlings when they go through the sale ring. Feed Your Head was born on May 21 and Fine Tuned Lady was a May 28 foal.

One of the most sensational fillies of the 1950s was Lady Ann Reed, who came out of obscurity from her early training in Missouri. She was astonishing on the track and now is an influential broodmare.

Lady Ann Reed’s daughter Tarport Lady Ann by Jamie is the fourth dam of both Feed Your Head and Caviart Wonder.

All 10 Oaks finalist were foaled in different locations, although many of them at breeding farms in the same area. Dream Together was foaled at Cane Run Farm in Georgetown, KY, while Overdraft Volo first saw the light of day at nearby Kentuckiana Farms.

All these statistics will count for nought when they line up behind the gate and fight it out for the honor of being the 2017 Hambletonian Oaks champion.