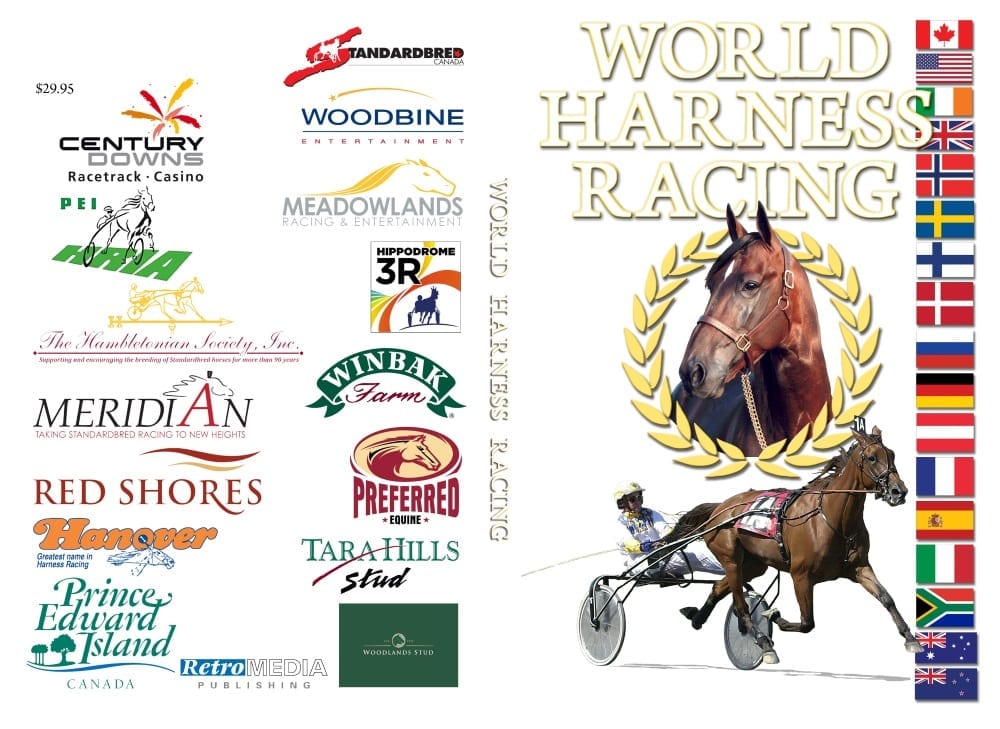 The Hall of Famer will be the special guest at the World Harness Racing book launch on Aug. 16 at Red Shores Charlottetown.

(Editor’s Note: Melissa Keith was one of the contributors to the World Harness Racing book).

Recent harness racing-related book releases have included historical titles, biographies, and even fiction. As managing editor and contributor for RetroMedia Publishing’s World Harness Racing, Jerry McCabe admits to being a bit partial, but says that the “commemorative book” for the upcoming World Trotting Conference (WTC) in Prince Edward Island is unique.

RetroMedia is an independent PEI press, helmed by Larry and Nancy Resnitzky. “We’re a publisher that dabbles in harness racing, releasing two books in the last 10 years with harness racing themes,” said McCabe, who previously worked on Paul Murphy’s popular Behind the Gate (RetroMedia, 2008) and HorsePower: Behind the Gate Returns (RetroMedia, 2014), books about racing personalities in or from the Maritime provinces. The former title is a regional bestseller which won a PEI Heritage Award in 2010 and is currently in its third printing.

World Harness Racing is global in focus, although WTC host province PEI receives consideration in its 170 pages. It contains summaries for 17 countries, with details not readily available online in English, and 100+ photos. “I think this is a good synopsis to get started, to give you a snapshot of racing in those countries,” said McCabe. “I haven’t seen any book that’s covered that international angle. The International Trotting Association has been doing this for 50 years now—this will be the 25th meeting, this year, for the World Trotting Conference, so we thought it was time to have a book to cover all that.”

The racing historian says World Harness Racing shares the WTC’s main objectives, although it was produced independently: “The general aim is to grow harness racing globally, but how is that happening? I’m hopeful that in some small way, this book can make our community a little bit tighter. Knowledge can do that — a little bit of knowledge of how some of the horsepeople from Europe or Down Under operate, it narrows the gap between you in some small way.”

Each WTC delegate will receive a copy of the new release, a limited number of which are available by pre-order at retromedia.ca. It will also sell for $29.95 Canadian at the official launch, slated for 3:30 pm on Wednesday August 16 at Red Shores Charlottetown and open to the general public.

“John Campbell will be available to sign books. He’ll be there in his new capacity as the president of the Hambletonian Society, one of 13 sponsors of the book,” said McCabe. “There will be another announcement, hopefully in the next week, for another celebrity harness racing participant we hope will be there, who is 99 per cent certain right now.” Former PEI minister of harness racing Robert Mitchell and publisher Larry Resnitzky will also attend the main-floor event, to be emceed by Red Shores marketing manager/WTC panelist Lee Drake.

World Harness Racing was assembled by corresponding with governing bodies, journalists and participants over the past year, then turning that material over to writers Trish Dooling, Shannon “Sugar” Doyle and McCabe. Support from sponsors, beginning with the Government of PEI, later encompassing some of the best-known breeders, racetracks, and organizations in the sport, made the project possible.

It’s not sugar-coated promotional material—McCabe emphasizes that the book puts facts first, even harsh ones, like “brutal statistics in one country where breedings were 6,000 10 years ago, and now they’re 400… The reality is that things are in crisis in that country.”

McCabe has a longstanding appreciation for the international nature of the game. “I was in the states in 1986, when I worked with Ron Waples; just after I left, they had the March of Dimes Trot… To me, that was one of the pinnacles. It was bigger than a Triple Crown race, in a sense: taking the best from here and racing the best from Europe.” He suggests that today, events like the WTC/WDC take on a greater importance than ever before. “I think the harness world is getting smaller. Increased collaboration is going to be part of the way forward.” World Harness Racing can serve as a primer for navigating that course.