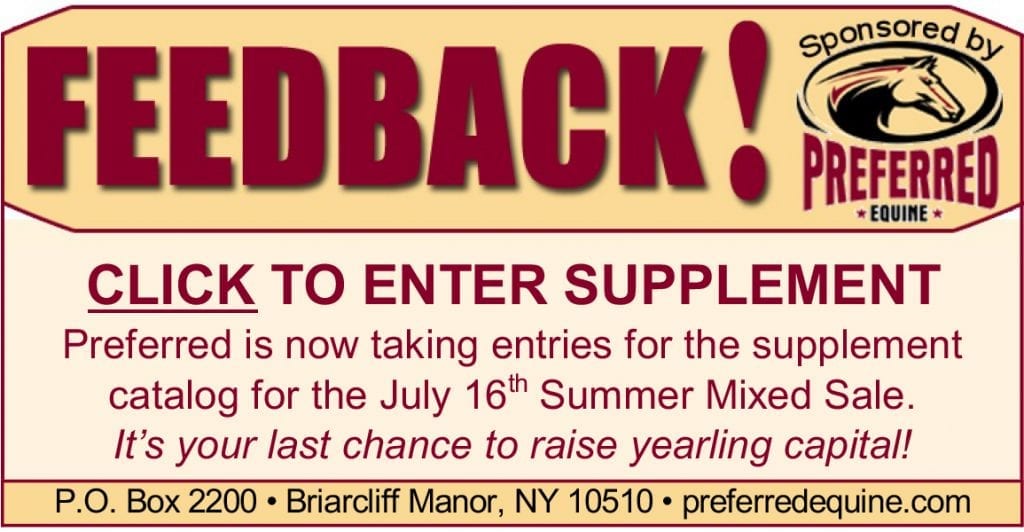 WEG enhancing its commitment to standardbreds

Your recognition of the great contributions made by Dr. Ted Clarke and Jamie Martin in your article (full article here) is most deserving and well done. Both have made great contributions to our industry. I want to address your concerns about a potential resulting loss of focus on standardbred racing at WEG and indeed throughout the Standardbred Alliance. As an initial matter, (CEO) Jim Lawson has spent more time this year on securing the future of Mohawk than any other racing initiative in the company. The future of the Standardbred Alliance is another high priority. Jim understands and exemplifies how important both breeds are to our mission, business and stakeholders, including our owners, trainers and communities.

The process of moving to Mohawk and operating there on a year round basis will increase the commitment of top level executive resources and on site executive management at Mohawk. That is a huge concrete and historic commitment to our standardbred business and the importance of new Mohawk. Jim and I talk about this regularly, including several times over the past few weeks. In our racing department, we are increasing our focus on ensuring we co-ordinate our racing offering and wagering options and scheduling to maximize wagering interest and results. This does require new skill sets across both breeds. The effective analysis and use of information is critical to most modern businesses and we are on top of that. My career has been 35 years in the same law firm, both as a practicing lawyer and a management and firm leader. We find the same to be true in running a major law firm; we are lawyers but we need increased expertise in technology, pricing and project management to be competitive and responsive to our clients. Of course, it also involves introducing younger people into our management teams to ensure future growth, engagement and sound succession planning. Mark McKelvie is an exciting example of how much personal and professional growth can result in a short time.

Jim is leading an important process of ensuring we are prepared for and embracing the future. As I noted above, that includes more, not less, executive focus on Mohawk and standardbred racing as well as the financial commitment announced last week and ultimately the greater development of the Mohawk site.

— Clay Horner  Chairman of the Board, Woodbine Entertainment Group

Changes at Yonkers / Gural and Vernon

A few stories caught my eye last week that were separate from the big stakes at Mohawk. The first was the unveiling of the new Yonkers finish line which took so long it seemed as though George W. Bush was the president when they first started looking for the right camera. Thankfully, the camera angle is better than the old one, although it was nearly impossible not to improve on the worst angle in the history of all horse racing. However, despite all the money and time spent on the video feed, can someone please tell Yonkers that the races look as though they are being recorded from the Good Year blimp. I mean the production is just awful hands down. The close ups and slo-mos after the race are nice, but the main view is terrible. Also, you have to be really scared about the future of harness racing when Yonkers posts their pool totals that barely equal the purse of the race. Case in point look at the pool totals for Yonkers 2nd race on Saturday night (June 17) vs the purse. Yikes!!! We know it will happen sooner or later, but state governments are not going to continue to throw money away if the sport cannot grow and be viable without subsidies.

The second story would be the best thing in awhile for harness racing. That of course was the idea being floated about a Yonkers meet at a site on the land of Belmont park. This was report in Harness Eye’s newsletter last Thursday. The proposed mile track would be awesome considering the purses Yonkers possesses, the type of track (size) bettors want to gamble on, and really the disheartening plight facing the Meadowlands and its quest for a casino. Personally, I don’t think it will ever happen because of the enormous amount of moving pieces, but it would be a real boon for the sport to have a flagship track like the Meadowlands used to be.

The last story concerns both Vernon and Jeff Gural. Gural, as well documented, is a polarizing figure. At times, he appears to want to be the white knight for the sport. Gural saved the Meadowlands from destruction and has tried to implement different initiatives to grow the sport. He has also been at the forefront of the fight against chemist trainers. Mostly, I personally applaud many of his efforts. However, he has many shortcomings as well which became highlighted again when he threatened to close Vernon Downs. It’s not as though it’s not his right, but trying to blackmail the New York State government by holding the jobs and the livelihood of those affected for tax breaks smells rotten. He did the same thing when his Tioga full fledged casino wasn’t chosen originally. Luckily, for him, NYS caved. Obviously, this practice is going to rear its ugly head at the Meadowlands sooner or later. Barring some real underhanded legislation in Trenton, I don’t see how it’s remotely possible for the Meadowlands to ever win approval for a casino. Unfortunately, the foes are too great. Not only does Gural have to contend with the sleazy NJ politicians who have pledged their souls to AC (Atlantic City), but also the millions of dollars of opposition that will come from NY and PA casino companies. Sadly, Genting alone (operator of Aqueduct), is a billion dollar conglomerate that can easily outspend Gural and the NJSOA and their allies. I expect to hear Gural rattle his saber soon after the next governor is elected as he did in NY or unfortunately pull the plug.

Sadly, and I don’t blame Gural because he just can’t compete monetarily, but the Meadowlands races may have hit new lows. Saturday’s (June 17) card was really tough to watch. Mostly short fields coupled with classes that I never imagined would run at the Meadowlands was a sad statement. The card, with the exception of a couple of races, resembled a card more suited for Freehold or really Vernon Downs.

Racing as entertainment a gateway to betting

Brett Sturman’s comments in his column titled “For entertainment purposes only” (full column here) appear to be negative toward “entertainment-first’ as a harness racing philosophy. I am one who believes any increase in the popularity and acceptance of harness racing will not be accomplished by following a gambling-first line of thinking. The present status of the industry proves this point.

The key to the survival and rebirth of harness racing is to recognize it and market it as a “participation activity”. The involvement of casual bettors is generally on the participation-first basis. The serious big time bettors appear to be trying to earn a living by gambling on horse racing. The casual group is the financial lifeline for those who are in the game to make a profit from gambling.

Elimination races, short fields, heavy favorites, champion horses, highly successful trainers, owners and breeders are as important to the future of harness racing as having a full program of “bettable races” for serious gamblers. The future for the sport is to recognize and sell participation at all levels including buying a mutual ticket as short time part ownership of a racehorse and as an entertainment venue.

I agree that harness racing needs marketing (full story here). I don’t agree with hiring an outside agency and doing it nationally. You need people who are involved with the sport to do it right. Most tracks already have their own PR people, but are they racing people? I know some who are. Last year, there was a $14,000 + Superfecta payoff at a track for a $2 bet. But if you weren’t at the track, I don’t think you would have heard about it. There were also some $9,000 payoffs that year. This year there have been older horses winning races nearly every night — 10 years old +. I don’t think you find that with thoroughbreds. This is interesting to me and to other horse lovers that these horses are still racing and winning. It makes me think they are getting good care. Aren’t a lot of people turned off, because they think all the horses are abused? The track PR people need to make friends with the local sports people and send press releases about items of interest at their track. When the newspapers, TV stations, etc., are short on stories, chances are they will use them. You cannot depend on social media alone. Sometimes you have to network in person. Most cities, and even smaller towns, have a local Chamber of Commerce. The one where I live holds a “Business After Hours” once a month, where you can meet hundreds of new people, and invite them to your track; especially if you have family friendly events coming up, like pony rides, carriage rides, etc. I can understand PA wanting to keep their money in their state. But why did they cut the “PA Harness Week” TV show? It had such entertaining and vibrant hosts. I did read a good idea in one of the harness newsletters I get. That was to somehow connect the live harness racing into a few select slot machines. People do love the sounds of the slots.