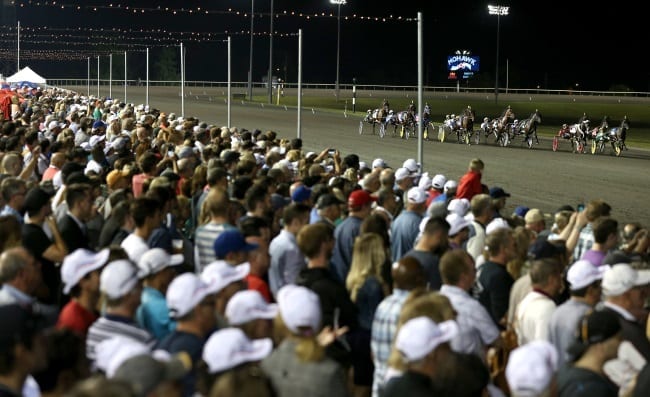 In some events for tonight’s Pepsi North America Cup program at Mohawk I choose as many as four contenders. However, there are other races where I may only note two or three, assessing the remainder of the finishing positions to be cases of general chaos, which is an opportunity for players to go with exotic partners that close with high odds.

7 BROADWAY DONNA – She’s getting better with every race at four and will be a major threat to the top the division this season, as well as worth her price here.

9 CAPRICE HILL – Should be in the thick of all exotics, more dangerous than will be displayed through odds.

4 HANNELORE HANOVER – She has a tougher season than the majority would agree to this early in the season.

6 GREAT VINTAGE – He has grown into a tough older pacer and could be a deserving price in total command of the mile. There will be too much money on Dr J Hanover due to his opportunistic Canadian record two back.

1 NIRVANA SEELSTER – All things being equal, clearly the second best in this lot.

1 HURRICANE BEACH – Don’t penalize him for not making the final. He was a gift in his Somebeachsomewhere division and rules here.

2 STEALTH BOMBER – Could suck along and complete the exacta and for price’s sake, is probably better there than Normandy Beach, whose absence from a trifecta will raise its price substantially.

7 AGENT Q – A top member of this division expected to be under-rated here, thus offering a price better than her chances.

1 SHAKE IT OFF LINDY – Primed to take this second of his season and go on to be a threat in the Hambletonian division.

10 GUARDIAN ANGEL AS – Either a speed move to a good position early or picking up tired ones late, he may complete a pricey exactor worth the shot.

6 CALL ME QUEEN BE – Looking for a powerhouse season, the conquest begins here and at a fair price considering the popularity of her competition here.

4 FEAR THE DRAGON – Before the season began it was documented that I had no trouble making this guy the division’s best despite the swarm of votes for Hunstville. Even with his short mistake in the elim he won. He is tons the best against his biggest rivals (one of which may be off the board in this), which will afford him a fair price, albeit low, to win.

Bet for profit or don’t bet at all and luck to everyone because no matter how well you handicap, luck counts.

For more handicapping picks, check out the special handicapping section that will be in the tonight’s Mohawk race program.