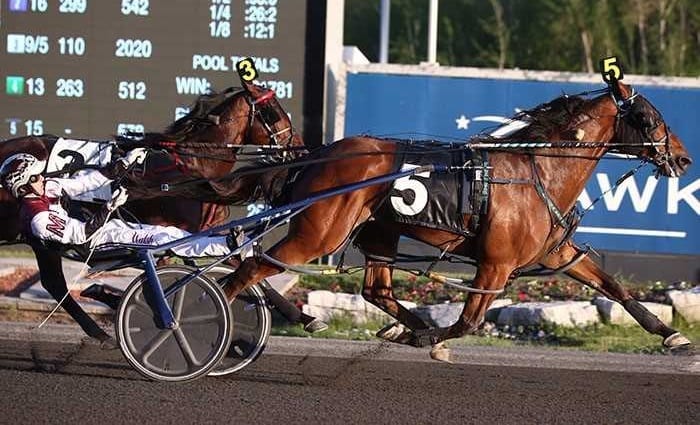 Dr. J Hanover turned heads this past Saturday in the harness racing world and in the process served notice to the older pacing division when he windmill dunked his way to a 1:46:4 record mile in a leg of the Graduate series at Mohawk.

That mile was the fastest one ever paced anywhere in the world outside of the U.S., and at least on the surface it seemed to have come out of nowhere. Was the record time more a reflection of the developing 4-year-old or the Mohawk track conditions that evening?

As we all know, final times attributed to horses in harness racing can be spurious. A horse that recorded an individual race time under an ideal set of circumstances may never be able to replicate that under more normal race conditions, which is the reason that only the winning horse of a race gets assigned a “mark”, or the time from that race assigned to its record.

This is part of a phenomenon that exists in harness racing but not thoroughbred racing where horses can be “sucked along” to produce misleadingly fast times. Examples of this are horses involved in fast races that never leave the rail and simply keep up, enabling them to tow along for a faster time than they could accomplish had they been forced to exert any of their own energy. Incidentally, these horses provide some of the best opportunities to play against as overbet horses in their next races out.

But this wasn’t the case whatsoever in Dr. J Hanover’s win. In the race, Dr. J Hanover left hard from post 5 into a fast enough :26:2 opening quarter and then seemed overloaded with pace when Doug McNair swung him off the cones around the three-quarter mark in 1:20. He came pacing home strongly to get the 1:46:4 score and there is no questioning that the win was legitimately earned. This makes the “how” of the way the record was achieved that much more fascinating.

Not to be forgotten is the fact that while the Tony Alagna trainee paced his mile in 1:46:4, second place finisher Boston Red Rocks paced his mile in 1:47 – which also would have been good enough for an all-time Canadian record. For two horses who had never paced better than 1:49:3 in their careers (1:50:1 in the case of Dr. J Hanover) now pacing in 1:46:4 and 1:47 in the same race goes to prove that the result of the time was a result of the environment and track conditions far more-so than the horses themselves.

The fact that the race took place in the daylight as the second race carded on the evening likely contributed somewhat to the quicker than normal final time. Along these lines, the first and third races of the night also went in sub 1:50 times as mid-level conditioned races and then times slowed noticeably as races went on throughout the night. After race 3, the only races the rest of the evening that went sub 1:50 were by McWicked in 1:48:4 and Sintra in 1:49:3.

What this all points to is that for some inexplicable reason, the track played exceptionally fast during the early part of the card and in the second race in particular. Going by time alone, no one in their right mind would think that Dr. J Hanover is 10 lengths better than McWicked or 15 lengths better than Sintra or Western Fame.

One thing that is for sure is that no horse has ever gone a mile in the 1:46:4 vicinity without at least pacing to a previous sub-1:50 win, which was the case here. Horses at the top of the all-time Canadian speed marks such as Always B Miki, Modern Legend, A Rocknroll Dance, Won The West and all the way down the line had all been established as star horses prior to their record clockings. Even Primetime Bobcat who didn’t have the Grand Circuit resume when he won in 1:47:2 at Mohawk, at least won in 1:48:1 in an open the week prior.

It’s always a remote possibility in extraordinarily fast miles such as this one that perhaps the race was flat out timed incorrectly. But considering that Trakus – the company that wirelessly tracks horses throughout the race – timed the race in 1:47:12 (1:47 flat in terms of fifths of a second), the race time as recorded by the track is accurate considering that Trakus often differs from the official race time by plus or minus a fifth of a second. And even if we accept the Trakus time, 1:47 would still be an all-time Canadian record.

Acknowledging the final win time as a freak anomaly, I actually think the better question is how did Dr J. Hanover improve enough in a short time to turn the tables on rivals that had beaten him rather soundly in recent races. Though an accomplished horse last year as a sophomore by being stakes-placed in a number of the premier events for 3-year-olds, the Somebeachsomewhere—So Perfect gelding had been winless through nine starts this year including performances that wouldn’t be regarded as anything special in the Levy series at Yonkers or in the Confederation Cup at Flamboro. Even in his prior leg of the Graduate series at the Meadowlands last month in May, Dr. J Hanover was a 34-1 longshot from the rail against comparable foes and could only manage a well-beaten, fifth-place finish.

On Saturday though, Dr. J Hanover was driven with a purpose. Driving the horse for the first time, it seemed like McNair knew he was sitting behind a good thing and drove him accordingly. All of the stars aligned and you can’t fault the horse for shining in favorable race circumstances.

It’ll be interesting to see if Dr. J Hanover is really this good against not only the clock but also his peers, and what is in store for him as the season moves forward. Time will tell.