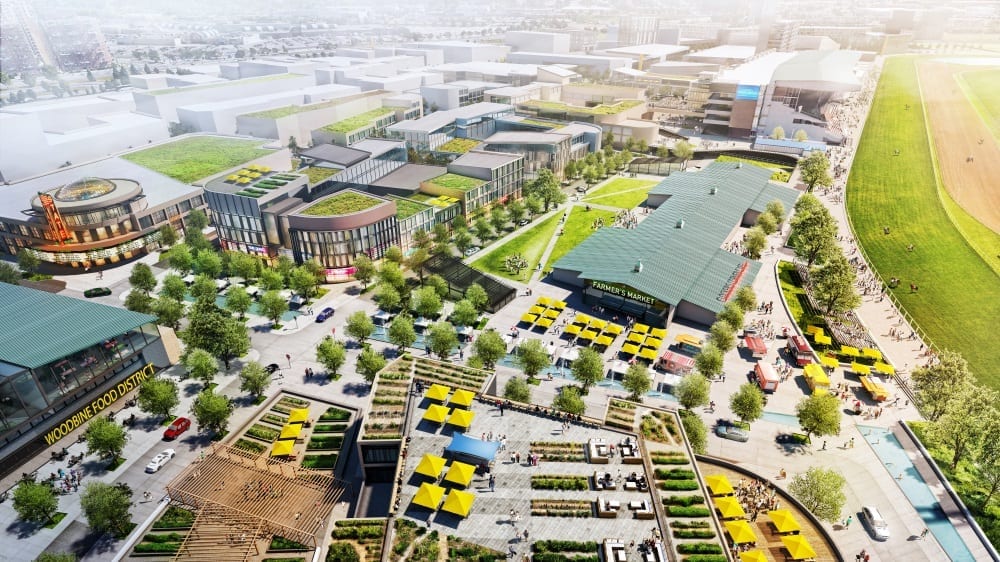 A day after the Toronto racing company released a master plan for the development of its Woodbine property, CEO Jim Lawson said WEG would welcome a similar development project at Mohawk, which is inching toward becoming a year-round home for harness racing.

Woodbine Entertainment Group (WEG) CEO Jim Lawson said the 440-acre parcel of land home to Mohawk Racetrack could one day be the site of the same kind of entertainment district and massive development being publicly courted for the 684-acre site of its sister track, Woodbine Racetrack.

“We think there is potential for development at Mohawk for all of the same reasons,” Lawson said Thursday, a day after WEG announced a master plan has been completed for the Woodbine Racetrack lands.

“We are committed to (Mohawk)… and we would welcome development there in the nature that we just talked about (at Woodbine) as an entertainment district,” Lawson said. “We know the town of Milton is very supportive and they are a great municipality and council to work with. The zoning is there for that sort of thing. Milton is the fastest growing municipality in the country, so it lends itself to this sort of additional food and beverage, music and theatre experience. Right now, the idea is to locate the gaming within the footprint of the building, but we will be in discussion, and certainly open to, having that development go on at Mohawk.”

This week’s announcement is a signal to developers that the land at Woodbine, in particular, is open for development, with WEG acting as the landowner. Illustrations WEG released showing a number of entertainment options surrounding the racetrack are suggestions about what kinds of development could work well with the racetrack, not set-in-stone glimpses into the future.

“Certainly, we don’t have the capital to do the development and we are risk adverse. Our main mandate is to support horse racing, so I would say that in most cases we will have a land lease and try to generate cash flow for the horse racing business,” he said. “Our role really is as the landowner and what I would call us ‘stewards’ of a great parcel of land to make sure that we do the right thing for the community and the right thing for the horse racing industry.”

Lawson was quick to stress development at Woodbine is likely a 15-to-20-year plan and there won’t be any construction until the Ontario Lottery and Gaming corporation (OLG) names the company that will operate an expanded casino at Woodbine. That announcement is expected in September of this year and the earliest a shovel could likely be in the ground on property development is the end of 2018, Lawson said.

WEG has tried for over a decade to develop its property and construction on one notable project, WoodbineLive, never started. Why does Lawson believe this latest master development plan will come to fruition?

Beyond being the site of an expanded casino and a top-tier horse racing venue, Lawson said what should also be attractive to developers about the Woodbine property is the fact that it is the “largest undeveloped piece of land in the GTA (Greater Toronto Area)… we’re in a unique position, really, of being a single landowner with that size of parcel of land that lets you phase it the way you want.”

He said improved public transportation to Woodbine would be a further enticement to developers.

“Developers are keenly interested in public transportation to the site. It’s something we are working on and it’s gaining momentum and acceptance. The municipality and the province are committed to public transportation in a way that is unprecedented in this province right now,” Lawson said, adding, there is “a big movement behind public transportation” in Toronto and, “potentially a mega hub in the Rexdale area, perhaps at the airport. Certainly, it would involve us. We have the Union-Pearson Line going right through our property and if the light rail transit goes over to Humber and has to make its way over to the airport, then Woodbine is the logical path, either down through (highway) 27 or through our property.”

Lawson said WEG is continuing to move toward making Mohawk a year-round harness racing facility and leaving Woodbine to the thoroughbreds. Nothing is certain, yet, on that issue, but those concerned that standardbreds may leave Woodbine just before that site becomes home to a flashy entertainment district need to “stay tuned,” Lawson said.

“Our goal is to make (Mohawk) the number one site for harness racing in North America,” Lawson said. “We are committed to it, to improving it, and I’m personally extremely excited for our contemplations for Mohawk and the way we are going to look at it. So, I don’t have those concerns at all.”

Lawson said a 20-year gaming lease with the OLG over the Mohawk slot hall means WEG is “committed to investing capital there and our goal is to make it – if it’s not already – the premier site. If I was a horseman, I would be thrilled with the direction that we’re going and you’ll be hearing more about it this year.”

He said he wants any development at Woodbine to be done in both a socially- and environmentally-responsible manner.

“We are reaching a whole new era in terms of urban planning and making sure that we have green space, bicycle paths and foot paths. We want to make it a nice community, which is going to take a long time.”

According to the WEG press release, the “‘city within a city’ concept is designed to unlock the value of the undeveloped land, generating long-term revenues that will sustainably support WEG’s horse racing operations, and thousands of farming jobs in rural communities across Ontario… The vision for the plan is for Woodbine to continue to be the ultimate destination for horse racing and gaming, while integrating new expanded entertainment and cultural offerings, food and dining, hotel, shopping, office space, post-secondary education, recreation, health, wellness, and urban residential living.”

Lawson said the key is to make sure development “complements and helps sustain racing for the next 20, 30, 40 years and Woodbine is the focus of that.”

He said the initial development phase “is that the gaming expansion will be a trigger for entertainment — a music venue and entertainment venue that comes with having a gaming experience and a horse racing experience… We’re trying to build the guest experience, restaurants, complementary retail, and all the rest.”

The entire point is to draw people to both the Woodbine and Mohawk sites and try to turn people on to horse racing.