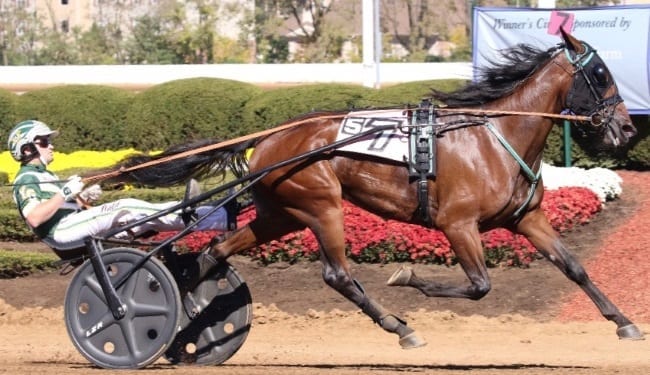 Marvin Katz and Al Libfeld’s homebred trotting filly is poised to be the toast of a sophomore class that also includes Magic Presto, Fine Tuned Lady and Princess Aurora.

“If she is like she is right now,” said Takter. “No one in her division is as good as she is. She is a very special horse.”

During 2016, Ariana G won the Peaceful Way, Doherty Memorial, New Jersey Sire Stakes Final and Breeders Crown. Her $743,967 in earnings were $300,000 more than her closest divisional pursuer. Her season’s mark of 1:51.4 was only one-fifth-of-a-second slower than the fastest of any two-year-old trotter a year ago, a mark set by the colt Walner, who enters 2017 as a heavy Hambletonian favorite.

“She had a good winter and is coming back really nice,” said Takter. “She’ll qualify (a week from tomorrow) at the Meadowlands and her first start will be in the sire stakes in early May and then we will go from there.”

There’s little doubt that Takter would love to take all of those stakes, but there could be a detour along the way.

“I nominated her to the ($500,000) Beal, which is against the boys (on July 1),” he said. “But I did that because she had six weeks of no races between the sire stakes and Delvin Miller (slated for July 15). I nominated her just in case I need the race.”

With a filly this good, might she be heading for the Hambletonian?

“No,” said Takter. “It’s too early to speculate on that. But who knows? The plan is for the Hambletonian Oaks and all of the other major filly stakes.”

“She has the ability to pick up some decent money this year,” said Takter. “She qualified okay at the Meadowlands last week (and she’s in tomorrow’s second qualifier at the Big M) and her first start will be in the Lady Suffolk in early May. But I don’t know how she’ll do on a half-mile track.”

Magic Presto (Kadabra—In The Mean Time—Muscles Yankee) earned more than half of her nearly $300,000 bankroll by taking the Goldsmith Maid in her final 2016 start in mid-November, and trainer Nifty Norman is high on his filly for this year.

“We’d been pretty hard on the filly all year,” said Norman. “For the (Ontario Sires Stakes) Super Final in Canada she got sick and we had to scratch her. We tried to get her back for the Breeders Crown and raced her, but she wasn’t healthy enough and she didn’t make the final. But going into the Goldsmith Maid, she got herself healthy and she was in good shape. I had to convince Brian (Sears) to come up and drive her. Brian said to me, ‘Do you think she’s good enough?’ I said, ‘She’s worth the trip, you’ll have a lot better horse this time,’ and he did.”

Norman wants to go in all of the major stakes, and is also looking for a big year on the Ontario Sire Stakes circuit. “She’s a big filly, she filled out,” said Norman. “She kind of dominated in the Ontario races (last year) and I think we have the top filly on the circuit. We’ll qualify at the Meadowlands (tomorrow, qualifier three) and her first start will be in the first week of May in the Ontario Breeders.”

What about Ariana G? “She was a class above them last year,” said Norman. “She’s the one to beat going into it, but I’m sure they’ll be some other fillies who’ll pop up and be pretty good, so we’ll see.”

Fine Tuned Lady (Cantab Hall—Poster Princess—Pine Chip) used big talent and several opportunities to put up some big numbers a year ago, as the John Butenschoen-trained lass was first or second in 11-of-12 starts, good for earnings of $438,340, second in the division.

“She was always a good training filly and she’s a real smart filly,” said Butenschoen. “She took advantage of the break of Ariana G (in the Kentuckiana) and took advantage of Chezatter’s break in the Pennsylvania Sire Stakes Championship. Things kind of went her way.”

Maybe they did. Good racing luck is always appreciated by horsemen. But this filly did win half of her starts a year ago, and figures to win a handful more during 2017.

“We put out a schedule this year where we could take advantage of how handy she is and what she can do,” said Butenschoen. “So far she filled out some, we qualified her down here in Florida last Friday. She landed in Pennsylvania (Monday) morning, so we’ll try to figure out our game plan between now and the 13th of May, which is the first sire stake.”

The filly is staked to all of the major events, and Butenschoen knows that means getting behind the gate alongside Ariana G. “Many aren’t as good as her.”

An understatement of grand, make that Grande, proportion.