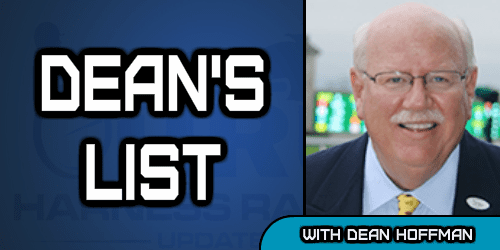 The page has become a wildly popular place to swap stories.

People have become rich and famous in history simply by seeing a need and finding a way to become famous.
John Polvinale laughs at the notion that he’s rich or famous, but he certainly found a need and fulfilled it when he created the Harness Racing History page on Facebook.

Within little more than a year, this page had grown to exceed more than 20,000 members, which far outstrips the total membership of the U.S. Trotting Association.

“I was an owner starting back in the 1970s and I’ve assembled a collection of harness memorabilia,” he says. “I became friends with Herve Filion and he gave me many old things like his Nansemond Jug trophy and his helmets.”

Polvinale said he didn’t want to keep his collection all to himself.

“I’m no expert on Facebook, but I was hoping to get maybe 50 people who liked the page,” he said.

Within a month he had more than 1,000 followers on the Harness Racing History page.

One reason, of course, is that Harness Racing History had a reach that extends around the globe and knows no borders or language barriers.

For example, one of the most popular posters is Oscar Belliveau who lives and teaches in Shanghai, China, which is not exactly a hotbed of harness enthusiasm. (Although Belliveau says that he shows his students You Tube videos of harness racing.)

Belliveau is writing an absolutely charming memoir of his life as a groom years ago and serializing it on the HRH page. He is a native of the Maritime provinces in eastern Canada (which is indeed a hotbed of harness racing enthusiasm).

He worked for many trainers at many tracks in the United States and Canada and relives his experiences with heartwarming anecdotes on the HRH page.

Belliveau worked for the top Quebec horseman Denis Larochelle and they stay in touch with each other through Facebook. Larochelle is nearing 80 and retired from active training, but his participation in the Harness Racing History page has allowed him to sustain his lifelong interest in the sport and keep in touch with old friends.

Simply put, the “Harness Racing History” is a Facebook page designed to allow harness racing devotees to share photos, program pages, and memories from the sport’s glorious past.

There is simply no way to calculate the friendships — new and renewed — that have occurred as a result of Harness Racing History. I’ve become friends with people around the world, but they are friends only in a digital sense. I’ve never actually shared a plate of poutine with my Quebec friends or a enjoyed bratwurst und sauerkraut with my German friends. But we are all friends in the Harness Racing History world on Facebook.

Polvinale not only created a FB page for which there was a crying need, but he set forth a simple and inviolable rule from the start of the race: No advertising.

“Once in a while I’ve got to delete a post or a person for trying to sell things, but I didn’t want a harness racing page where you see two photos and three advertisements,” said Polvinale.

He saw the purpose of the page as bringing people together and teaching young people about the sport’s history.

“It brings a tear to my eye when I see horsemen connecting with long-lost friends or seeing a photo of a horse from their past,” he says. “I’m learning every day from the posts. It’s amazing that we have people from France, Sweden, Ireland, and around the world.”

Reading Pettersen’s posts is like having drinks and exchanging tales about the good, the bad, and the ugly horses we’ve all encountered over the years. I have never met Pettersen but I would love to sit in a bar and swap lies with him. (As long as he is buying the wine.)

A major impetus for HRG occurred more than a year ago when Polvinale was contacted by a person in Columbus, OH, who came across a huge inventory of harness photos and bound volumes of old magazines. At first, Polvinale was concerned that the items were stolen, but determined that they’d simply been abandoned.

He paid $600 for the entire lot and drove from northeast Pennsylvania to central Ohio to claim his prize.

“I literally filled my car,” he said. “I couldn’t even have taken a passenger because I had stuff in the front seat.”

He saw that many of the photos were stamped with US Trotting Association on the back and they were apparently left behind when the USTA moved to its new offices.

“There were some bound volumes of magazines dating from 1872-1928 and the covers were maybe a little worn but the contents were fine,” he said. “This stuff was going to wind up in the dump.”

Polvinale immediately dubbed his acquisition the Treasure Trove and says he still hasn’t looked through all of it.

(When he posted some photos from his Treasure Trove, he used a “TT” abbreviation of Facebook and some people thought he meant time trial. That misunderstanding was quickly resolved.)

Polvinale is nearing 80 but says he’s in good health and looking forward to digging deeper into the Treasure Trove.

He’s retired after a career as an architect and builder and lives five minutes from Pocono Downs.

“I’ve seen the deterioration of racing at Pocono,” he says. “We got top purses and top drivers, but too many 2-5 shots winning. I’ve offered to display some of my Pocono memorabilia to the track for display, but they’re not interested.”

No one knows if the growth of Harness Racing History will level off or continue soaring. John Polvinate is enjoying the ride and modestly says, “I’m just trying to do my part to promote harness racing.”

A personal perspective on HRH

The HRH Facebook page allows people to share the treasures they have saved for decades. In some cases those are family photos of horses loved by them but not known to others. In other cases, people share program pages or videos.

I have had a Facebook page since 2008. It all started when I was asked by Finnish trotting journalist Leena Alerini if I’d like to communicate via Facebook. I did what any middle-aged dude would do in similar circumstances: I summoned my teenage daughter Catherine and asked her how to create a Facebook page.

For about a year, my only two Facebook friends were my daughter and Leena. Then I got a friend request from Judy Davis-Wilson from Delaware. I saw Judy, who has deep family roots in the standardbred sport, shortly thereafter at the Harrisburg sale and said, “Sorry that I didn’t respond to your Facebook friend request, but I’ve forgotten my password.”

She assured me that was easy to recover, so I friended her and my friends list increased 50 per cent from two to three. Then it just seemed to take off without control.

Like most in harness racing, I assume, my list of FB friends consists of both “horse” friends and “normal” friends. (Not to imply that horse people are not normal. Heavens no!)

So when I posted anything related to horse racing on Facebook friends, I knew that at least half of them could care less. They wanted to see family, birthday, or vacation photos, not horses pulling little buggies. Harness Racing History changed all that.

Recently I suggested to Polvinale that he consider having a booth or tent at the Meadowlands on Hambletonian Day to give HRH Facebook members a place to congregate and to make virtual friends into real friends. He is making plans now to make that a reality.

Personally, I like to dream (and dream big) and I could even envision trotting tours for members of Harness Racing History in which they would visit tracks and standardbred farms in other countries. But that would be a major undertaking.

But dreams are free. If dreams were ever outlawed, horse racing would die overnight.