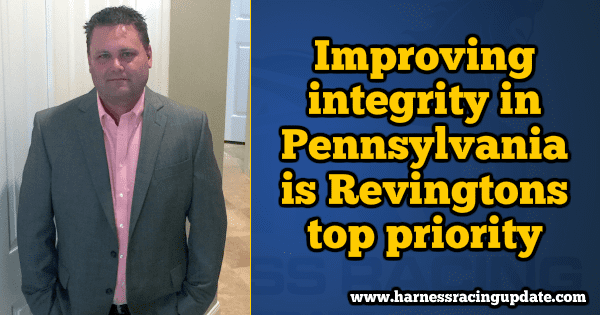 The state’s new director of standardbred racing said out-of-competition testing is “an important tool to tackle our integrity concerns.”

The new director of standardbred racing for the Pennsylvania Horse Racing Commission (PHRC) said improving integrity in the racing product is “the most critical issue that we need to address going forward.”

Brett Revington — who started with the PHRC on Nov. 28 of 2016 after the commission moved from two, three-member, breed-specific panels to one, 10-member commission — said Thursday that, “we must address this integrity issue head on and with the recent passing of out-of-competition testing I do feel that it’s a step in the right direction.”

He said he’s pleased out-of-competition testing was approved in February at the most recent PHRC meeting.

“That’s a great movement. The basis for our proposal really came from the ARCI (Association of Racing Commissioners International) model, but we had to tweak it marginally to comply with the PA code and PA laws. Our goal is to launch this program in mid-to-late April of this year. I just feel that’s an important tool to tackle our integrity concerns,” he said.

“I don’t feel that we can reverse the decline in wager trend until the integrity issue has been dealt with. We also need to give our patrons confidence in our program, so the same holds true for increasing participant involvement for new owners, breeders, trainers. It all comes back to that integrity issue. In time, the numbers will increase or reverse the declining trends.”

Revington has already proven he won’t automatically stay a suspension while a participant waits for his or her appeal to be heard.

In December of 2016, trainer Virgil Addison of Philadelphia was handed suspensions totaling 16 years and $35,000 in fines after horses he conditions tested positive four separate times for the Class 3 erectile dysfunction drug Sildenafil (the active ingredient in Viagra) after racing at Harrah’s Philadelphia. Addison appealed all four rulings, but the PHRC turned down his request to stay the penalties. That means Addison remains suspended while he waits for his appeals to be heard, which is believed to be unprecedented in the state and is certainly rare in most harness racing jurisdictions.

“I can’t really speak to what the previous people did in this role, but I feel that going forward it’s going to be used as a tool to address our integrity issue,” Revington said. “We take a very serious look at each and every case. Each case really is unique. You look at what drug, the trainer’s history and look at all the merits of the case and it ultimately comes down to what is best for the industry as a whole. So, I wouldn’t say it’s a new tool, but it is a tool that is at our disposal that we can utilize… It really comes down to the merits of the case. When I was first up in the judges’ stand during my training, the judges told me that every case is unique. You see interference happen one way and you think it’s the same in the next race, but something a little bit different happens. Everything is unique and that’s the method that I’m taking.”

Revington came to the PHRC from Isle Casino Racing Pompano Park in Florida where he spent two-and-a-half years as the director of racing.

“I thought we accomplished a lot during that time and, obviously, I think it’s well-documented that our handle was our biggest highlight, going from $29 million to $61 million in roughly two years. Just with the increased enthusiasm for decoupling within the state, I felt it was best for my family to pursue other employment,” Revington said, referring to the movement to enact legislation that would allow most of the state’s pari-mutuel facilities to drop racing but still retain their slots licenses.

A native of Lucan, ON — the same town that is home to Seelster Farms, one of Ontario’s largest standardbred breeding operations — Revington began his career working in the race office at the Woodbine Entertainment Group (WEG), spending time as an assistant race secretary, charter and stakes manager. He went from WEG to the Ontario Racing Commission for a three-year stint before moving to The Raceway at The Western Fair District for a brief term that was followed by a move to the Red Shores gaming and racing company in Prince Edward Island. Pompano Park was his next stop.

“When my wife and I first started dating, I told her that a goal of mine was to live and work in Florida one day. So 12 years later, it happened. I’m not so sure that she was quite prepared for it, but we thoroughly enjoyed our time there and it was a great experience.”

Having extensive racetrack experience puts Revington in a position to better address concerns from gamblers. He said the industry needs to do a better job of listening to its customers.

“I think we need to listen better to our stakeholders, from breeders, track operators, horsemen’s groups, but, most importantly, to the group that gets overlooked the most — our patrons,” he said. “It is unfortunate that they are overlooked, but they need to be a focus.”

To that end, Revington said he wants to revamp some rules of racing to provide greater clarity to patrons and provide greater consistency in how the rule book is enforced at the state’s three main harness tracks — The Meadows in Washington, PA, The Downs at Mohegan Sun Pocono in Wilkes-Barre, PA and Harrah’s Philadelphia in Chester, PA.

“I think it’s important for the racing participants and our bettors that we take a consistent stance in all three so they are getting the same message,” Revington said.

He also said he wants to improve the rule book.

“I think we have a great opportunity to update our rules and regs. We’ve been granted, with the new Act, a three-year window to update our rules and regs, some of which are outdated, so we are in the process of reviewing those that we currently have and rules that no longer apply,” Revington said. “This gives us the opportunity to review what other jurisdictions have in place and basically we can pick and choose what is best suited for racing in Pennsylvania. We’ve got a three-year window, from October of 2016, so we’ve a real opportunity to really make an impact.”

“The USTA passed basically the rule they have been using in Ontario for quite some time. It talks about the number of pylons you can go inside and placings and what not. I just feel that it’s a solid rule and also brings more uniformity to the industry. I feel it’s important to have more uniform rule across our industry, for not only the horsepeople but the patrons, too.”

Another concerns dealing with the placing of horses.

“There would be a more complete understanding of why a horse was placed. Currently, the number of variations of the rule probably leaves the patrons with more questions than answers. So those are the first two things I’d like to adopt.”

As for whipping rules, Revington believes Pennsylvania is in line with other jurisdictions.

“It’s very similar to what other jurisdictions have gone through to eliminate the one-handed whipping. Since my arrival, only one of the three harness tracks has been open, but soon the other two will open, so I’ll have a better opportunity to review our whipping policy then,” he said.

“Animal welfare, to me and the commission, remains a high priority. One thing we always look at is track safety and maintenance, that’s always a priority. The communication between the track operators and horsemen’s groups has been excellent and I think it’s imperative going forward that it continues to stay that way as we address this concern.

“We’ve got great confidence in our lab — the PETRL lab. It’s widely considered one of the top three labs in the country. We have a highly qualified director of the lab in Dr. Mary Robinson. The state and horsemen have heavily invested in the last couple of years to ensure that the lab has state-of-the art equipment. The second part to that is that the lab is constantly doing research so we stay current with what is going on in the equine industry. So those are the three things we can do right now to make sure that animal welfare remains a priority.”

He said the PHRC might also play a role in takeout rates on wagering which, in general, are particularly high in Pennsylvania and frequently draw the ire of betting patrons.

‘I don’t think it’s any secret that we do have high takeout rates here. As far as I’m concerned, anything we can do to improve the industry within Pennsylvania is definitely on the table. That’s one of the things I’m looking at now, doing a bit of a case study to see if it’s worth our while. I think that it is, but it’s just a matter of putting up the numbers and showcasing a plan. Anything is on the table for improving the industry as a whole, as well as Pennsylvania,” he said.

He said the PHRC could also play an important role in educating politicians about the value of the industry. Since slots came to the state and racing began receiving a financial injection from them, it seems to be an annual game for politicians to suggest horse racing’s cut could be better spent elsewhere.

‘We have to educate the government on the value that the equine industry brings to the state of Pennsylvania. I realize that every year it seems to be a hot-button topic, but there are a number of key points where we can definitely state the value that we bring to the table,” Revington said.

Having a focus on disseminating positive news is important, he said.

“A lot of the time we hear about the negatives surrounding our industry. I think we need to focus as an industry as a whole on doing a better job of telling our positive news,” Revington said. “I believe it simply can’t be done only within our own media outlets. It needs to expand to find new channels to get out our message.”

It helps that the industry has a new marketing fund of some $2.5 million a year for horse racing.

“I think it’s a great opportunity to create a unified message and create a proper brand across the equine industry and to educate people on what a great program we have within the state of Pennsylvania,” Revington said. “For example, it’s a great place to train horses, for people to set up their family roots, PA has a pension and health-care program for trainers and their employees, which really is the standard for the industry. It really comes back to educating the public, telling current or potential owners that Pennsylvania really is a great place to breed and race the horses, with a very solid purse structure and breeding rewards program. I just feel that it’s a bit of a miss currently and we need to get this good news out about our programs and educate the public.”