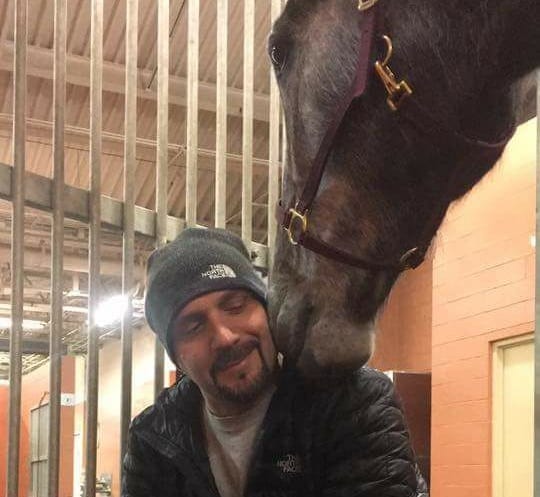 What’s love got to do with it?

“When we were both coming up in the business together, Dave Mattia used to beg me to go to the paddock with him whenever he raced Watchit Skipper or Ciara Mello, and he’d give me ridiculous amounts of money just to sit there with him. I never really had to do anything. One night I asked him why… why am I here? He said. ‘You’re just here to make sure that my horses don’t die.’ I’ll never forget him saying that because he wasn’t kidding.” — Michael J. Russo, trainer

On a warm April afternoon in 2001, Charlie the shipper called to tell me that Mrs Good Cookie was dead. The decision to put her down was made only moments after she was unloaded from Charlie’s trailer at New Bolton Center. Then, in his best imitation of a fatherly tone, and probably far more aware of my brittle nature than I could ever be, Charlie carefully finessed my anger and bitterness. “It was the right decision and the horse was in too much pain,” he said. “Now slow down, turn around, and go back home before you wind up dead too, you dummy.”

The funny thing about platitudes, the kind that Charlie threw around anyway, is that they actually work when you use them on stupefied people. I did what I was told to do. It was the only rational solution. My juvenile grip on the steering wheel matured just long enough for me to exit the New Jersey Turnpike and double back around to my business of training horses. For a moment I was able to ditch some half-baked solemn promise that I’d uttered in anger only moments before. I don’t know, it was something about how I would never again so much as touch another horse for the rest of my life. Then I zoned back to a complacent reality — a place where I assured myself that these things happen to horses all the time, and that my life with horses would go on as usual.

I couldn’t have been more wrong about life going on as usual because from that moment on my entire relationship with horses changed. The mainspring was shot. What started out as a case of mild colic for a perfectly lovely filly, ended in her painful death and the immeasurably less tragic demise of my own interest in hands-on harness racing. Sure, I went on for another 10 years or so, but I was never the same. Some people might call it an epiphany or an enlightenment, but for me it was a game changer — a deal breaker. Loving horses, and then expecting to properly train them was, in my opinion, not a thing.

In spite of her ornate pedigree and the genuine promise she was showing as a two-year-old in training, Mrs Good Cookie’s only noteworthy accomplishment on earth was the line she drew in my heart. I could not love horses and be a good trainer at the same time. There is no gray area there for me. I assumed this applied to everyone, but for a lot of talented horsemen, especially the ones who love their animals, there is indeed a gray area. It’s a very real place where many reputable trainers manage to work successfully within precariously narrow walls.

There are, however, more than a few trainers out there who are not one bit concerned about a horse’s welfare. They not only step outside of that gray area, they don’t even know it exists. Horses who languish in barns like that live a hellish life because anything goes. Trainers who operate in that nefarious fringe — a place that we all know is out there — certainly don’t love horses. In fact, I would bet that they don’t even LIKE them.

Anyway, one night at the Meadowlands, I watched the great Obrigado walk out onto the track and I wondered how Paul Kelley could deal with having a horse like that. Paul is a highly reputable gentleman and a gifted trainer. He loves his horses and he’s proud of them too. How is he able to partition his love for the animal and any nagging worry that something could go wrong?

“I always try to follow the horse,” Paul said. “Each horse is an individual that requires its own time to develop in order to be successful. I think enough of each horse to try and adhere to that philosophy. The economics of the game often lead me to make decisions, which require parting ways with a horse. It’s quite often not easy but there is a path between love and business that we all must walk.”

Being a big fan of the Wakizashi Hanover, and knowing that his connections are very hands-on, I asked his trainer JoAnn Looney-King the same basic question. Her answer was essentially the same, but perhaps a bit more sentimental.

“Of course, Wakizashi Hanover and Purrfect Bags get the first greetings every day,” she said. “But we try and keep it all small enough to touch them and to be involved with each horse daily. I know that each one of these horses will eventually move on to an unknown future when they leave us, so we try to be sure that each horse gets a special interest and the best of care while we have them here. We like for our owners to make money and we take pride in the fact that they often do. A lot of that happens because we truly care about our horses.”

Another aspect to all of this anthropomorphic mushiness — in spite of the fact that I take it very seriously — involves people who might love the business of horses but don’t actually love the horses themselves; or they simply don’t have time to think about anything more then a passing pat on the neck. That’s not so hard to understand if you’re talking about a trainer with a huge barn full of horses. The sentiment is there, but it gets passed on down to the horse when a busy trainer takes the time to hire knowledgeable and compassionate caretakers.

There are also a lot of big-money guys who make a living buying and selling horses, and in many cases, they may have had only brief experience actually working with the animals. Naturally, you expect them to be a little distant from the horses because it’s a tough business. But, when you follow certain buyers and sellers in social media, you get the general idea about where they stand. Just from looking at Facebook, it’s patently clear to me that guys like David Reid and Bob Boni and a few others, truly love the horses. When they talk about the horses, it’s not all about sale prices or money earned even though that’s their livelihood. More often they tend to romanticize and reflect back to their memories of a horse’s third or fourth dam or a half-sister. It’s like they are talking about family members. They’re very human about it, and it’s quite charming.

Lastly, I should mention that this past autumn I put in a bid on a yearling colt by Guccio. The next bid after mine, the winning one, was a long time coming. That was the longest 30 seconds I’d sat through in ages. It gave me plenty of time to think about how much I’d actually reconstructed myself and to fondly remember Mrs Good Cookie. Did I really want to go back on my solemn oath? Was I truly ready to get back to hands on? I couldn’t be sure, but when the hammer went down, and the auctioneer wasn’t pointing at me, I wasn’t the least bit disappointed.