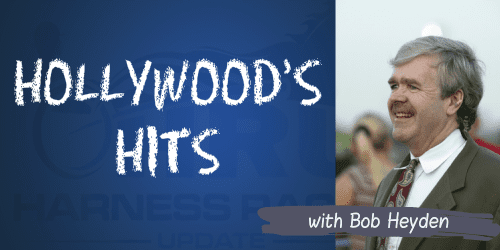 Hollywood’s Hits: Famous juniors and how they fared in million-dollar races

Let’s take a look at drivers that have a “Jr.” on the end of their name in the program and how they fared in races carrying a seven-figure purse.

In the 1981 Meadowlands Pace, Dr. John Hayes, Jr. came from 10th to first with Conquered after qualifying with a third-place finish. This was the colt’s only Meadowlands victory. Hayes also the first edition of the North America Cup with Legal Notice, but that was before the purse was $1 million.

In the 2001 Canadian Trotting Classic that went for $1,120,250, 59-year-old Bob Blanton, Jr. won with S Js Caviar. Blanton, known mostly as a skilled blacksmith, drove and trained the colt to divisional honors. He and Roger Hammer (2005 Vivid Photo in the Hambletonian) remain the oldest to drive a horse to victory in a million-dollar race.

In 1981, John Simpson, Jr., was a nose back of McKinzie Almahurst with Lon Todd Hanover in the $1,760,000 Woodrow Wilson, the fourth richest race in harness racing history. Simpson, Jr. with Timothy T in 1970 is the last “junior” to win the Hambletonian. No “junior” has ever won the Little Brown Jug.

This ain’t thoroughbreds, my friends

In the thoroughbreds, California Chrome, Seattle Slew, Affirmed, Secretariat, American Pharoah and most others have their stardom centered around the Triple Crown. Even Alydar is best known for his Triple Crown races and his memorable duels with Affirmed in 1978 event, though he fell a buck short.

That’s not the case in harness racing, where some of the richest performers have not had much success in Triple Crown races.

Look at the last seven pacers who set the single season earnings record — all three-year-olds.

Add to this list the name of Rocknroll Hanover, whose name appears on the all-time list of top single-season earners. He earned $2,233,257 in 2005 and did not win a Triple Crown race. As a matter of fact, he’s the last Horse of the Year to have suffered two defeats in the same day. On Jug Day in 2005, he twice lost to the winner, P Forty Seven.

On July 5, 1975, in consecutive races, Rambling Willie and his brother Rambling Shorty appeared at Sportsman’s Park. Willie, a foal of 1975, won while his senior brother (by two years) was fifth. “Shorty” was a chestnut and both were out of the dam Rambling Rebel. Willie had a mark at that time of 1:57.4 while his brother managed a 2:01 record.

Stat of the day

Stanley Dancer never won a Breeders Crown, but he bred the horse that won the most Breeders Crowns — Peace Corps, the four-time winner.

You probably know Mark O’Mara from Jate Lobell’s name. But in 1987, he won the American National that year with three different horses.

Glider tied the 1:58 stakes record for freshman pacing fillies, Firm Tribute won the three-year-old trotting colt event that was going for more than $100,000 for the first time and Jate Lobell won the sophomore pacing colt division in 1:53, which was a new stakes mark by one-and-four-fifths seconds a year after Jate Lobell won the freshman pacing colt American-National in 1:55.2, which was a new stakes record by two full seconds.