How fair is the fair start pole?

What constitutes the start of a harness race?

The answer that you probably would give to this seemingly obvious question is that a harness race begins when the starter gives the word “go.” This answer would be supported by the fact that wagering for harness races close as the starter releases the field. But is it really that simple?

While wagering on a race ceases once the starter sends horses on their way, wagering remains open throughout an extended period of time in the run-up to the release where a race could already have been lost for a horse. In the one-eighth mile stretch leading up to the official start of a race where horses follow the starting gate, there is the potential for circumstances to occur that could change the total complexion of a race. In this sense, the race itself already has begun yet wagers can still be accepted.

In what other sport or form of gaming are wagers still accepted after the wheels for that event have already been put in motion?

I was watching a race from Flamboro Downs this past Sunday and as a disclosure I did have a vested interest in the subject horse. In this race, the #8 horse Liseberg (who couldn’t possibly lose under normal conditions; take my word for it) wasn’t able to get on gait until the starting gate was well on its way and found himself hopelessly distanced by the time the race started.

The image (above right) is critical for two reasons related to this column. First, it shows what the last flash of the odds were for each horse prior to wagering closing and second, it shows the presence of a fair start pole.

The odds of Liseberg at this time was 4-5 and the odds of second choice #4 Frankly Speaking was 2-1. However, instead of getting bet down further to somewhere in the area of 3-5 which is what would have likely happened for Liseberg, he drifted up to even money while Frankly Speaking went from 2-1 all the way down to 6-5 (and subsequently led every step for the win).

The overwhelmingly majority of people who play the races today are doing so remotely and across different countries, often on time delays and don’t have the opportunity to make the last second adjustments that potentially those people on-track may have the ability to do. This is a clear example of wagers being modified by a select few where it’s beyond doubt that the complexion of the race has already been altered.

As for the fair start pole, this is something that Flamboro and other tracks across Canadian provinces should be commended for. For those unfamiliar, the fair start pole is a designation where if a horse has not reached a certain point at the time the starter begins the race, then refunds are to be issued for those horses. Essentially it was designed as a way to protect the interest of bettors who have wagered on a horse with no realistic chance to even compete.

In the case of Liseberg, refunds were not issued as judges determined he indeed had a fair start despite visual evidence that could arguably suggest otherwise. Perhaps the fact that he miraculously loomed around the final turn and actually hit the board played into the factor, too. But while the fair start pole isn’t perfect as demonstrated in this case, it does typically offer a safeguard towards horses that are for all intents and purposes not participating in the race.

The fair start pole only resolves the most egregious instances of horses being distanced behind the starting gate, but doesn’t account for horses who are already within the fair start pole, yet are either still lagging behind other horses or who are not on stride. I’m not saying by any means that refunds should be issued on these instances as well, but rather illustrating another imbalance between circumstances impacting a race “before” it starts and only a small number of people being able to adjust for it.

Aside from saying tough luck (to put it mildly), other dissent to a fair start in harness racing is that if a refund is issued on one horse, then the odds of all other horses go down. This is true, but had that horse been able to compete as normal then the race outcome itself would have very likely been different. Thoroughbred racing deals with this constantly with late scratches at the gate and no one disputes that a horse for example that refuses to load in the gate should not be counted as a runner.

Despite the United States Trotting Association (USTA) and Alcohol and Gaming Commission of Ontario (AGCO) differing on the implementing of a fair start pole across their tracks, they do have identical language in their rules when it comes to the starters issuing recalls.

The most common reasons for a recall are either broken equipment or interference, but from a bettor’s standpoint why is there protection in the case of broken equipment or interference (only before a race, by the way), but no protection at U.S. tracks for a horse that isn’t present at the start of a race? I understand, of course, that tracks would incur a loss of revenue from refunds on wagers that included the scratched horse, but the integrity of the race and protecting the wagering public really should be paramount.

What it comes down to is that the outcome of a harness race can be directly related to events that take place before the starter says “go.” As such, wagering should be shut off following a countdown that clearly defines when horses are to begin assembling behind the starting gate.

For one, it would eliminate final dramatic odds flashes that bettors are already wary of to begin with. But more importantly it would ensure that everyone is betting the race on a level playing field. I think that’s something we could all live with. 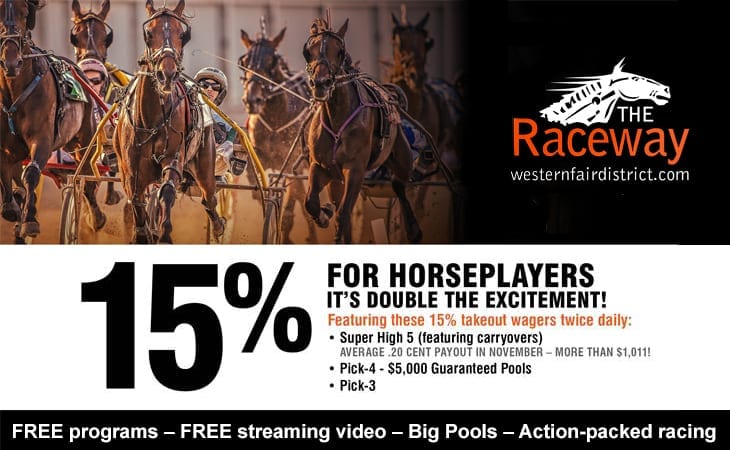 Race 3: READY ANY TIME came up short last week as the big favorite despite getting a nice second over tow into the race. It’s not one of my favorite angles, but the winner of that race came from one of the better barns going right now and this one’s races from two or three back would clearly be good enough to make amends in this spot; bounces back.

Race 7: In the F&M Preferred, PL HURRICANE has proved of late that she can go with these and needs to be respected in her current form. This one got the trip two back to win the Preferred in a lifetime best 1:50:4 and last week was locked in through the stretch with all sorts of pace. Waples is back again and she’s enticing on the ‪6-1 morning line; will probably offer something close to that value. SANDBETWEENURTOES was inching in last out when she ran out of room; figures odds-on once again while making her second start back since the qualifier. MS MAC N CHEESE was able to take them coast to coast last week but might be pressed harder now. ARTISTIC MADISON looks sharp from the rail for Menary; tough call on WAASMULA if the price is short.

Race 10: JJs DELIVERY was a near 4-1 winner selected here last week and I’ll be happy to come right back with him once again for reasons similar to last week. He’s clearly thriving since the Dec. 19 claim and his 1:50:3 mile last week was super; easily sharp enough to handle the next ‪step up. CARRACCI HANOVER is a player on the move back to the inside but is likely to be a tad overbet. ERLE DALE N is typically a threat against these but makes first start since November.