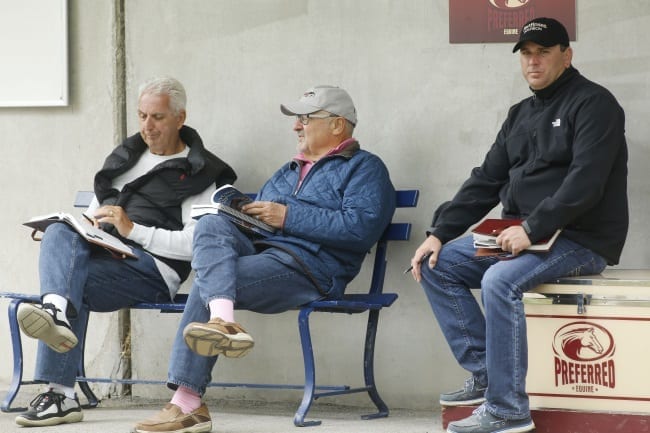 Inspired by last winter’s success of The Deck at Sunshine Meadows, Myron Bell has started On The Deck Partners and spent more than $1 million buying top-tier yearlings he hopes will attract new owners to the game.

It is the morning of the final yearling session at the Standardbred Horse Sale in Harrisburg, PA and Myron Bell is sitting on a director’s chair in the Hunterton Farms consignment near the back ring at the Pennsylvania Farm Show Complex. It is a long way from Florida, but the pedigree guru, owner and racing manger for Brittany Farms is already making big plans for the winter to recruit new horse owners from some of the Sunshine State’s tony, gated communities.

“I’m basically trying to get new people who may become active buyers of horses here,” Bell said, emphasizing the word ‘here’ with a wave of his hands to indicate he’s talking about Harrisburg. By “here” Bell also means the Lexington Selected Yearling Sale, where part of his new venture called On The Deck Partners spent $980,000 on six yearlings. The group added another yearling at Harrisburg for $100,000 to push its total expenditure for seven yearlings — all colts, and all to be trained by Tony Alagna — over $1 million.

Where Anthony MacDonald’s Thestable.ca is purposely trying to attract blue-collar owners with minimal investment, Bell is aiming for something more blue-blooded. In conjunction with the United States Trotting Association, Bell has taken out a full-page ad in a glitzy magazine pitching the joys of horse ownership to wealthy, semi-retired and restless Floridians. The goal is to get them to check it out during Saturday morning open houses on The Deck at Sunshine Meadows built last winter by trainers Alagna and Frank M. Antonacci.

“Maybe they would be interested in racing, if it was presented to them in a new and exciting way. They can come down and jog a horse, we have a two-seater. They can eat, drink and ask questions,” Bell said. “It’s not only for Tony Alagna, this is for the whole industry. I’ll introduce them to any trainer that’s in Sunshine Meadows and if they hit it off and they want to get involved, so be it.”

Bell said the core members of On The Deck Partners, besides himself and his wife, Stephanie, are: Alagna, George Segal and his Brittany Farms, John Fodera, Steve Wienick, Robert Cooper and Joe Barbera. There is a different mix of owners on each horse and Bell said his goal is, “to have an auction in February and sell part of these horses to some new owners.

Bell said he is trying to reduce the risk for new owners on a couple of fronts. First, he is employing his knowledge of pedigrees to buy the best possible yearlings with the greatest potential to end up as stallions

“Having a true understanding of what bloodlines can do, can get (new ownes0 to the classic races like the Hambletonian and the Meadowlands Pace and Breeders Crown. That’s what we shoot for,” Bell said.
Second, getting those horses on the track before new owners are asked to buy in reduces their risk of ending up with a dud.
“We are giving them an opportunity where we might save them some grief. A lot of these horses (we bought at Lexington) are up and going already. They are really nice. Tony Alagna, one of our trainers, treats these (potential owners) like royalty, which they are. The two most important elements we have in our industry is the horse and the owner, not that the trainer or the catch driver or blacksmith or caretaker isn’t important, but the horse makes it happen along with the owner,” Bell said.

“This might take two years to work. This year might be too late, but we persevere. Rome wasn’t built in a day. I didn’t buy $200,000 horses 20 years ago. I worked up to it. We have people that want the best and we’ll make sure they have a shot at having the best.”

So far, On The Deck Partners have purchased the following yearlings:

Hip 43 – Somebeachsomewhere colt out of Authorize named Singing Sands for $150,000
“This is the first colt out of Authorize and Delinquent Account is a filly that I bought as a yearling and then George (Segal) bought as a broodmare and she’s become one of the most prolific foundation mares in our history today,” Bell said. “Delinquent Account has a lot of daughters and granddaughters that have produced numerous horses such as Western Terror, If I Can Dream, Artiscape and Western Shore.”

Hip 56 – Somebeachsomewhere colt out of Credit Rating named Fundamental AM for $200,000
“(Fundamental AM) has had two fillies. Her filly from last year bought $275,000 and had an injury, but I knew she had a lot of ability because Tony Alagna trained her. This colt was the first colt out of the mare and, there again, it was a Delinquent Account production and, we feel, a very special horse,” Bell said.

Hip 65 – Cantab Hall colt out of Forever Graceful named Gallant Man for $350,000
“When George Segal bought Brittany Farms (from Bill Shehan), Keystone Profile came with the farm, and she was a foundation mare. She produced a foal named Act Of Grace, who was the same year as Continentalvictory – both great fillies that George bred,” Bell said. “The only problem with Act Of Grace was that after her racing career she only had two foals, one daughter and one colt. The daughter is the second dam of this horse. In other words, her dam, Graceful Touch, had two stallions — Muscle Mass and Muscle Massive. Now, imagine if she has three or four daughters how great that family would be? It’s good now, but they are waiting for another stallion right now, and I hope it’s this one.”

Hip 194 – Conway Hall colt out of Garbo Hall named Godspell Hall for $120,000
“I think that colt could be a special horse. He’s a very good-moving horse,” Bell said.

Hip 415 – American Ideal colt out of Sure Fun Tryin named Rush To Judgement for $10,000
“He’s maternally inbred, a 4×4 to Ambiguity who is the dam of Three Diamonds. The mare had a lot of ability. The first foal is a broodmare for us now, Shes A Hot Mess and she’s in foal to Captaintreacherous. This colt, for some reason, brought $10,000. We took him back and we’re going to offer him as a door prize on the deck. In other words, when we have our sale, we’re going to offer him as a door prize for people that attend the deck. We’ll have a drawing. We’re going to do something, I haven’t figured it out. Whoever bids maybe they’ll donate it to their favorite charity or something. There was nothing wrong with him and he brought $10,000.”