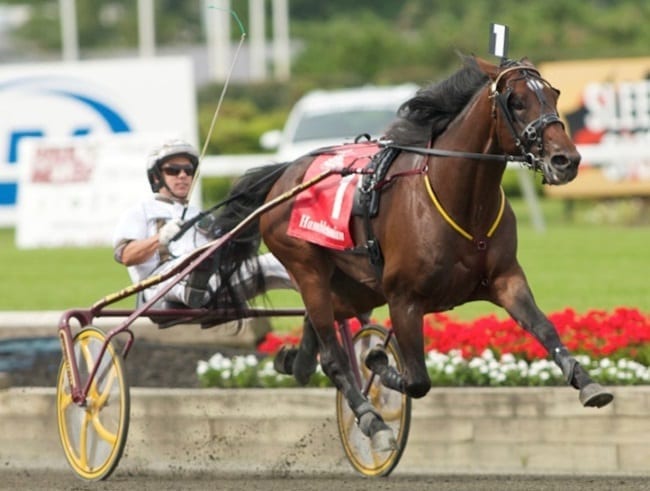 Stallion shares in the outstanding trotting sire sold for big bucks Thursday in the opening session of the Standardbred Horse Sale Company’s Mixed Sale that was dominated by broodmares.

Muscle Hill’s dominance of the trotting marketing continued Thursday (Nov. 10) during the opening Mixed session of the Standardbred Horse Sale at the Pennsylvania Farm Show Complex in Harrisburg. Two sets of Muscle Hill stallion shares, both sold by Concord Stud, fetched $175,000 and $170,000, respectively.

Preferred Equine Marketing’s David Reid said he thought it was a record price for a stallion share sold at auction.

“Obviously, he’s a dominant sire, but that’s a strong price. Not that he doesn’t warrant it, but that could be a record,” Reid said.

“In Europe there’s two sires they really desire: Muscle Hill here and Ready Cash over there,” Reid said. “There’s two dominant trotting sires in the world right now and they paid for one of them today.”

“On a day like today, we saw the people who brought yearlings to sell, especially if they had a good sale, reinvesting,” sale vice-president Russell Williams told Ellen Harvey of Harness Racing Communications. “They went from consigner to customer; they were buying. A couple hundred thousand is a good price for a broodmare. I would never sell a broodmare anywhere else but Harrisburg.”

The session topper was mare Satin Pillows purchased for $250,000 by Steve Stewart of Hunterton Farm from the Peninsula Farms consignment.

The 11-year-old daughter of Conway Hall out of Bold Dreamer is a half-sister to Pampered Princess, two-time divisional champion, and the dam of Breeders Crown and divisional champion To Dream On (1:52.1, $975,395). She is in foal to Cantab Hall.

“Where we have made our most money, Pizza Dolce, Southwind Serena, Graceful Touch, Emilie Cas El – (broodmares) have been the best,” Stewart said. “That’s what we are trying to do, playing at the top level with one of the best. We were very surprised that we bought her for that price. We were ready to go quite a few more (bids). If you can play at that level, that is where you need to try to play. It’s worked out for us and she will be a great addition to the other girls at the farm.”

Satin Pillows had a 2016 colt by Muscle Hill who died, but Stewart is inclined to breed her to Muscle Hill again in 2017.

“I was told by Carter (Duer, of Peninsula Farms) that the foal was spectacular,” Stewart said. “She’s had some bad luck, but hopefully now that will work out better for us. She will be very happy.”

Peninsula also sold the second-highest priced mare sold Thursday when Hanover Shoe Farms paid $160,000 for Cedar Dove, a daughter of Andover Hall out of Pine For Her. Cedar Dove was the 2011 divisional champion and sports career earnings of nearly $1.2 million and a mark of 1:52.3.

“She was a great mare, a lot of name recognition and a great-looking mare,” said Hanover farm manager Dr. Bridgette Jablonsky. “I like the fact that she’s in foal to Explosive Matter because he never had a mare bred like that to him, so I’m excited to sell the best-bred Explosive Matter (progeny) ever… She has a Muscle Hill weanling and it probably would be nice to breed her back to Muscle Hill.”

Sugar Wheeler will go right back where she started from, selling for $150,000 from the Concord Stud Farm consignment as agent for the estate of Bill Weaver and partners Wellwood, Hainsworth and Kelley. She was bought back for the farm, with the sales ticket signed by Julie Meirs.

Her 2016 yearling colt by Muscle Hill sold on Monday for $400,000 and the current weanling colt by Kadabra sold for $60,000 to Thomas Dillon just minutes before the mare sold.

“We did not have the intention (to try to buy her) at all,” Meirs said. “We sold her $400,000 Muscle Hill colt earlier in the week, so you have to do a double-take on looking at her that way. We had a good sale and needed to make sure we put something back in to the broodmare band every year that will continue to produce those yearlings that everyone’s looking for, so we thought that she would be one to get. She had a nice-looking Kadabra weanling here so we will see what happens.

“It will be nice to have one of the mares that we’ve had on the farm for Mr. Weaver and his partners,” added her father, David Meirs III. “They were family for us and we have one of the better ones now.”

At the other end of the price spectrum, the 21-year-old Neverhaveneverwill, Hip No. 1249, sold for $2,000 as the third from last sale of the day, to Mitchel Skolnick of Bluestone Farm.

Today, in the final Standardbred Horse Sale session, the racehorses will take the ring to round out a sale that has proven to be one of the best in Harrisburg in many years.

“I’m really looking forward to (today),” Reid said. “I think I have a lot of outstanding prospects, a little bit of everything, I’ve got some nice two-year-old racehorses. I’ve got very well-bred fabulous fillies. I’ve got some very good three-year-old pacing and trotting colts and some outstanding aged performers.

“I’m looking forward to capping off a week that you have to assume sale management is very happy with the outcome.”