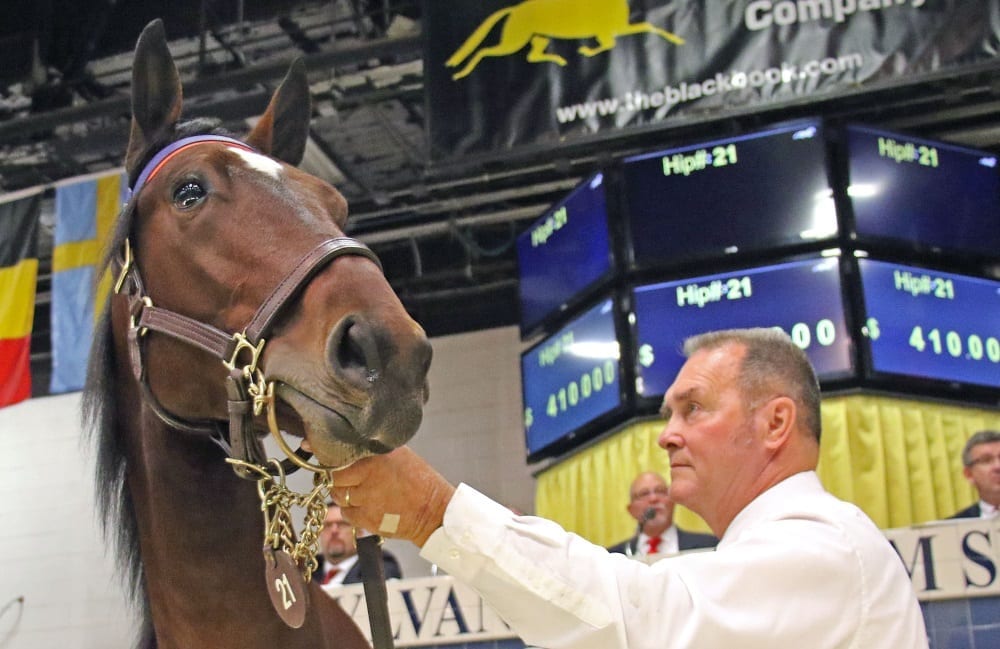 Standardbred Horse Sales Company president Pete Spears said Monday’s average of $78,676 came from a smaller opening session designed to “create a sense of excitement and enthusiasm on the first day.”

Standardbred Horse Sales Company president and CEO Pete Spears said it is difficult to compare Monday’s terrific opening day numbers from the Harrisburg, PA yearling sale with last year. But there’s no question he was ecstatic about an average of $78,676 that was up sharply over every opening session in recent memory.

“We’re very happy with that,” Spears said. “Everyone I’ve talked to has said there’s been a lot of interest, a lot of excitement. A lot of people have said they have not even been able to buy yet, or even get close. When you see the people who have bought today, they are people who usually buy on the very high end. So, I think there’s an awful lot of people that simply haven’t had a chance, yet, and will be ready (today) and Wednesday. So, I’m pleased.

“We wanted to create a sense of excitement and enthusiasm on the first day.”

Spears said it’s difficult to compare numbers with last year because 88 fewer horses were sold this year on opening day of the sale held at the Pennsylvania State Farm Show Complex. Also, last year, sale numbers were impacted when the Pennsylvania governor threatened to shut down racing.

“We were able to do it this year because our numbers are down a little bit as the industry has contracted and as we have been able to encourage some people on the low end to sell at some of the other regional sales, it gives us more of an opportunity to do this.”

The Muscle Hill colt out of Shared Past named Story Time Hanover that sold as hip 21 topped the session with a bid of $410,000 by Perry Soderberg on behalf of trainer Jimmy Takter and Sweden’s Melby Gard AB.

“He was the right size. He was the right type, a Muscle Hill. He has a great pedigree. He is a clean horse and he was probably the most complete horse in the sale among the trotting colts,” Soderberg said of the horse bred and consigned by Hanover Shoe Farms.

“Conformation, the way he moves in a paddock and his pedigree add to it. He had a little bit of everything for sure.

He said #25, a Donato Hanover filly out of Simplicity is “the complete package. The sister, Sianna Hanover, was probably the most promising early when I saw her at Gaitway this summer in the baby races. I thought she would be a very good filly this year. She was okay, but she didn’t develop. I thought this one was a tiny bit better individual.”

Soderberg said hip 26, a Cantab Hall filly out of Sleep Tight My Luv named This Dreams On Me, “was probably my pick out of the whole sale when it came to trotting fillies.” This Dreams On Me has Pampered Princess ($1.65 million) in her family.

“I bought Pampered Princess many years ago and she is probably the most complete filly that I ever picked out at the sale and maybe the number one yearling I ever picked out, conformation-wise,” Soderberg said. “If you look at her still in the paddock today she is perfect, pretty much. We bought To Dream On out of the same family. So, we like the family, we like the individual and I liked her the best out of all the trotting fillies.”

Hip 57, a Muscle Hill colt out of You Want Me named You Know You Do, “has the size and the power,” Soderberg said. “I saw him at Peninsula in Lexington. They turned him out and he really had that punch that I’m looking for in the paddock. The video was good. The two top trotting colts, in my opinion, were 21 and this one. That’s the ones that we went after.”

You Know You Do is also going to Takter to train, though Soderberg said the exact owners had not been finalized by the time the yearling was purchased.

Soderberg said buying a number of high-priced yearlings for Takter is something of a change in strategy for the trainer who wants to train fewer horses.

“Except for this year, we always bought a lot of bargain, low-priced horses to mix it up; mid-range and low-priced and some of the high-priced ones, as well,” Soderberg said. “But this year Jimmy is cutting down a little bit and we have a different structure. It’s more the top-level horses that he wants.”

Muscle Hill had the four-highest priced yearlings on Monday, including $400,000-selling colt Hey Jock out of Sugar Wheeler purchased by Serge Godin’s Montreal-based Determination stable. Hey Jock will be trained by Quebec trainer Luc Blais, who said the owner liked the individual and the colt’s pedigree.

“Mr. Godin owned Wheeling N Dealin out of the same family. For sure he likes that pedigree,” Blais said, acknowledging that there is added pressure training at $400,000 yearling, “but that’s a good challenge.”

“I trained Sugar Wheeler and I just loved her,” Keeling said. “She made our partners good money… We sold a filly last year for $40,000 and we were really disappointed because we thought she was a good individual. So, we were a little nervous with this one, but he was a really outstanding individual.”

“I was stunned watching the bidding,” Wellwood said.

“He looks like a really nice horse,” Horner said. “And the pedigree, it’s not only Betting Line. To be frank, the chance of getting another Betting Line are slim and none. That’s not why we bought him. We bought him to buy a nice horse. And we liked the back pedigree on (Somebeachsomewhere).”

“I think, for the most part, they are bringing what we anticipated they would. Some maybe a litte more, some maybe a little less, but I would say we’re not far off our total guestimates,” said Hanover Shoe Farms publicity man Murray Brown.

Spears said it helped that Hanover saved all of its best yearlings for the Harrisburg sale.

“We’re just going back to the way we used to do it when we had Garden State. We sold our B horses there and we sold all our As here. So, it’s really just a reversion to an older pattern,” Spears said.

A total of 40 yearlings sold for at least $100,000, an increase of 48 per cent compared to last year despite 88 fewer horses passing through the auction ring this year.

Standardbred Horse Sales Company chairman Russell Williams said he could not remember the sale ever having a better day in terms of average sale.

“We were fairly confident,” Williams said. “It turned out better than we hoped. The confidence came from the quality of the catalogue and from the strong sales that everyone else has been having. They always go together.”