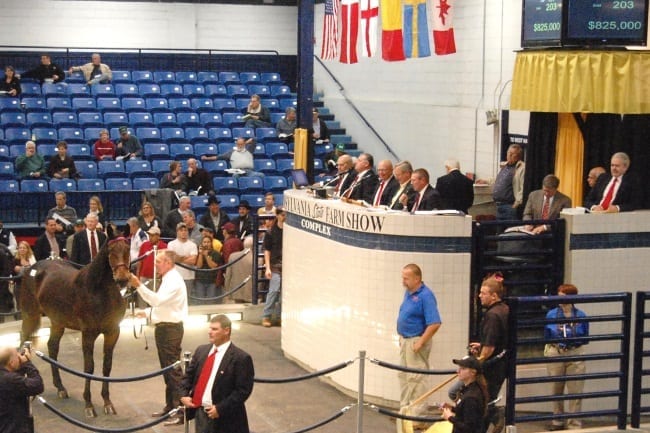 Expect fireworks at the Harrisburg sale

The blood bay colt sashayed into the sale ring, and suddenly the Pennsylvania Farm Show Arena went silent. It was the fall of 1958.

It was the hush of anticipation. Horsemen in the crowd knew that fireworks would explode when the bidding started, but they had no idea where the offers would end.

When the bidding ended, the auctioneer hammered down a yearling pacer named Dancer Hanover for $105,000. He was the first standardbred — or thoroughbred — yearling to command a six-figure price.

The sale of Dancer Hanover is one of the many storied moments in the history of the Standardbred Horse Sale, known in the harness racing vernacular as simple the “Harrisburg Sale.”

After its inception Harrisburg in 1939, the sale was moved to the fairgrounds in York, PA during the World War II years, but soon returned to the huge agricultural arena in the state capital. It’s been the site of many memorable moments in standardbred sale history.

In 2011, the trotting colt Detour Hanover fetched a fantastic sum of $825,000, the highest price ever paid for a fledging trotter or pacer.

Will there be any such magic moments in next week’s Harrisburg sale? Anything can — and often does — happen at a horse sale. Logic is tossed out the window when bidders are determined to buy a coveted horse.

One standardbred yearling consignor told me that an owner loved one of his colts so much that he confessed before the sale, “I’m going to buy him no matter how much he costs.”

The breeder told me, “Now if I could’ve found one more person who felt the same way, I’d have been a rich, rich man.”

The Harrisburg Sale has long been associated with Hanover Shoe Farms, which has sent powerhouse consignments into the ring since the sale’s inception. This year, Hanover sells another bountiful crop of yearlings at Harrisburg. So it’s not surprising that yearlings with the Hanover surname have made major headlines at Harrisburg.

Before Dancer Hanover made history in 1958, the record price for a standardbred yearling was the $72,000 price fetched by Imperial Hanover in 1949. He turned out to be a colossal dud, earning $1,731, and bidders were, thus, a bit gun shy about paying astronomical sums.

Dancer Hanover changed that. He had been named for the rising young New Jersey horseman Stanley Dancer and the colt’s namesake had assembled a group of owners willing to pay a record $75,000 to acquire the prize colt.

When hip number 914 came into the ring in 1958, Delvin Miller opened the bidding with an offer of $25,000. (Keep in mind that Hanover’s consignment the previous year at Harrisburg had averaged $5,564.)

The bids came fast and furious and soon the record price of Imperial Hanover and Dancer’s limit of $75,000 were both passed. Dancer was sitting with Martin Shriner, one of his investors, and Shriner told Dancer to keep bidding.

The bids didn’t stop until Dancer offered $100,000, and then the onlookers in the arena burst into applause. But the colt still hadn’t been sold. Jim Camp from California tossed in a $102,000 bid. Shriner told Dancer to keep going.

“No, Mr. Shriner, you’re the only one of the owners here, and the others don’t want him at this price,” Dancer protested. Shriner assured Dancer that he’d handle the money worries.

(Swapson was the first thoroughbred yearling to sell for six figures when he commanded a $130,000 bid in 1961.)

Dancer Hanover proved to be a fast, but erratic, pacer and ended this career with a then-sensational 1:56.4 mark, but only $87,746 on his card. He returned to Hanover Shoe Farms and sired the Triple Crown winner Romeo Hanover in his first crop.

A dozen years after Dancer Hanover sold, his daughter Romalie Hanover became the first filly to command a hundred grand price as she sold for $101,000. She was the dominant Grand Circuit filly of her class for two seasons and banked almost $400,000 in the early 1970s.

He was referring to Detour Hanover, the brother to Hambletonian winner Donato Hanover. Detour was a big, strapping dude and Murray told me, “I guarantee you he’s the sale topper.”

Detour Hanover was not only the sale topper of that auction, but of all time when the Cancelliere brothers of New Jersey got into a bidding duel with Karl Erik Bender of Sweden. Both parties wanted the prize colt badly.

In the end, the Cancellieres collared the colt, but it cost them $825,000 to do so. They celebrated and accepted congratulations when the colt was hammered down.

That was about the only time they had reason to celebrate their acquisition of Detour Hanover as he earned just over $25,000 on the track. He’s embarked on his breeding career, serving a book of 17 mares last year and four mares this year. He’s under lease to the Delaware Valley University.

Will history be made again this year at Harrisburg? Who knows? As is often said, anything can happen at a horse sale.