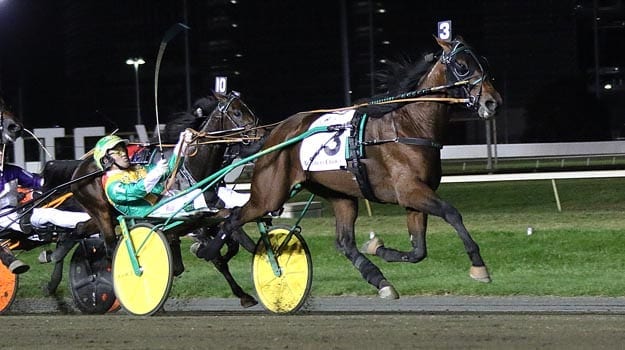 The bettors apparently knew something the experts didn’t.

While on paper, the $500,000 Breeders Crown final for sophomore trotting colts looked like a final, epic duel between Trotting Triple Crown champion, Marion Marauder (Muscle Hill – Spellbound Hanover) and his arch-rival, Southwind Frank (Muscle Hill – Flawless Lindy), it was Jimmy Takter trainee Bar Hopping who was getting all the action going postward.

Sent off as the 4-5 favorite, Bar Hopping (Muscle Hill – Cocktail Hour) made good on those bets, equalling the 1:51.4 stakes record set by fellow Takter student, Father Patrick, in 2014 as he won by a length and a half over Southwind Frank (Yannick Gingras) and longshot Double L Lindy (Ake Svanstedt). In doing so, he surpassed $1 million in lifetime earnings, and handed Takter his 30th Breeders Crown victory – the most of any trainer to date.

Tim Tetrick, who drove Bar Hopping, said, “I felt really good (going into the race). Last week he raced really well. We opened him up a little bit and he trotted a big mile. Today, off cover, he really responded well.

“My horse has raced against (Southwind Frank and Marion Marauder) all year, and a couple of times he drew bad and could never get into the race when they raced hard, but we still got checks. Those are great horses, and (Bar Hopping) was right there with him.”

As the horses came to the gate, Andrew Harris trainee Waitlifter K made a break in post position one, causing Scott Zeron to hang back a bit with Marion Marauder in post two. Both he and Tetrick got away sluggishly at the start, while Andy Miller hustled Breeders Crown elimination winner, Sutton, to the lead with Southwind Frank stalking in second from post nine.

The second of three Takter entries, Lagerfeld (David Miller), came first over to challenge Sutton as the field neared the three-quarter pole, leaving Southwind Frank little racing room and providing perfect cover for a late rush from Bar Hopping on the outside. When Southwind Frank finally found a bit of racing room, it was too late.

To the surprise of many, Marion Marauder, who had a record of 10 wins in 14 starts this season, was never a factor in this contest, remaining well back of the pack and fading to 10th.

“Bar Hopping has been up against Marion Marauder and Southwind Frank all season and has not had it easy,” Takter said. “They’re three great horses. To be honest I didn’t see what happened with Marion Marauder tonight – I had three horses in this race (Bar Hopping, Lagerfeld, and longshot Love Matters) so I wasn’t really watching him.”

Zeron later said, “I think (Marion Marauder) was a little sick; off his game. He has definitely always given me his all. In every start he has been out here, and today he didn’t have it early on in the race. It’s unfortunate, but hopefully he goes on to bigger and better things at stud.”

Trainer Paula Wellwood had already announced that the Breeders Crown was to be Marion Marauder’s final race.

Tim Tetrick claimed his third Breeders Crown trophy of the evening with the victory behind Bar Hopping. “Any time you win one of those big trophies, they are very, very hard to get; that’s why we (start) qualifying in May and we work so hard to get to those big races. It’s very, very special,” he said.

Bar Hopping was a $190,000 yearling at the Standardbred Horse Sales Company’s 2014 sale in Harrisburg. He is owned by Christina Takter of East Windsor, New Jersey, Hatfield Stables of Columbus, Ohio, and Marvin Katz and Al Libfeld, both Ontario-based. The Breeders Crown victory pushes his lifetime earnings to $1,163, 033.