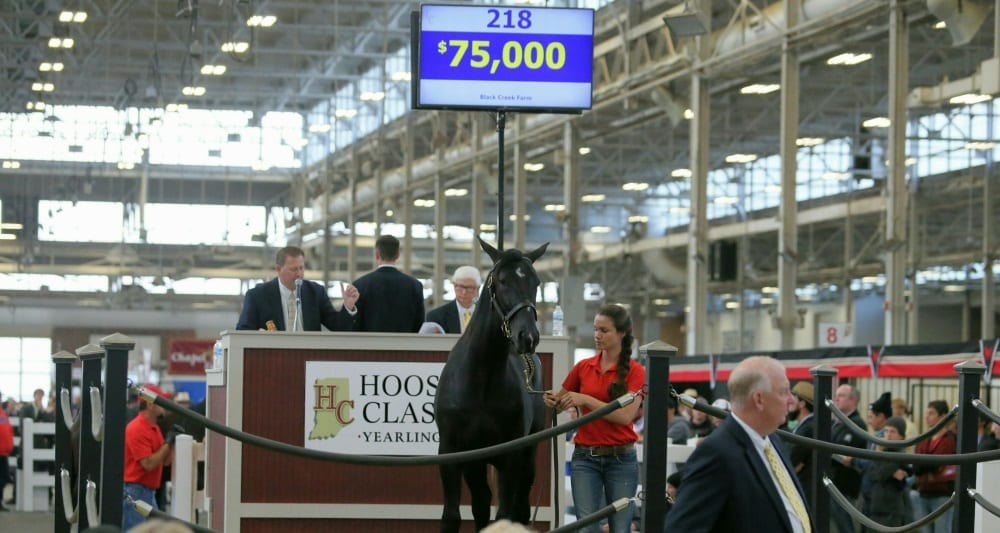 Average up 14 per cent at Hoosier Classic

Indiana’s racing product is on the upswing and that means that Indiana-sired yearlings are in demand. Hoosier Classic Yearling Sale Company LLC wrapped up its 2016 sale Saturday (Oct. 29) at the Indiana State Fairgrounds, and the results are proof positive that Indiana’s breed development program is thriving. Over the course of the two-day sale, 356 yearlings passed through the sale ring, generating sales of $5.9 million, and good for an average of $16,630. That average is a 14 per cent improvement over 2015 results.

“I’m extremely pleased with the response. It shows the rising popularity of the Indiana program,” said sale manager Steve Cross. “It shows we’re heading in the right direction with the quality of stallions and mares bred.”

The sale topper came in Saturday’s session when a full-brother to millionaire Natural Herbie entered the ring for consignor Black Creek Farm. Au National Herbie, a black Here Comes Herbie—Ljanearl colt, was the 27th baby sold on Day 2 (Hip 218), hammered down for $75,000. Trainer Dan Shetler signed the ticket as agent. While no yearling fetched a six-figure price tag, Cross was not disappointed. He pointed to other areas where the sale was stronger than in previous years.

“I was very optimistic coming in with the results from other sales and the fact that they were up,” he explained. “We didn’t have a big six-figure ticket, but the middle more than made up for it. It was gratifying to see the horses in the middle have their day. That’s the progress I like to see.”

One of the highlights of the sale was the first crop of trotting sire Guccio hitting the marketplace. The stallion stands at Victory Hill Farm, and there were 61 offspring from the Hambletonian runner-up consigned to the sale, with 23 colts, four geldings and 34 fillies cataloged. A total of 60 Guccio yearlings were sold, averaging $23,270. Bluebird Mario, a colt that is the first foal from Indiana Sires Stakes final winner My Sweet Shiela, led all Guccio babies with a $62,000 final bid. He was closely followed by Rocking Destinys, a Guccio colt from the Black Creek consignment that was the top priced trotter of Hoosier Classic’s Friday session, purchased for $60,000 by Peter Wrenn.

“I was really happy with how well they were received,” said Victory Hill Farm’s Maria King. “With a first crop, you never know how they’ll be received. There was a lot of hype and buzz, and a lot of activity at farms that had Guccios.”

Several buyers were extremely active at the Hoosier Classic sale, led by the father-son duo of Bo and Pat DeLong. The younger DeLong signed 14 slips for sales totaling $463,200. The biggest investment was Cosmic Power (Hip 103), a Rockin Image colt consigned by Victory Hill Farm, hammered down for $60,000.

Tom Pollack was another buyer that is bullish on the Indiana program. He purchased eight yearlings totaling $295,000, led by My Oscars Arockin. Cataloged as Hip 257, the Rockin Image colt is a half-brother to $600,000 winner Jammin Joshua, consigned by David Wayne Yoder.

“Indiana has improved tremendously. With Always A Virgin and Rockin Image, and with the addition of Guccio to go with Jailhouse Jesse and Swan For All, it’s causing more people to take notice of Indiana,” Pollack said.

He likes participating in Indiana because the program has improved, but you can still get a well-bred yearling for a reasonable price. With 65 horses in his operation, Pollack wants to expand his racing footprint, and he likes the competitive landscape.

“In Pennsylvania, if you want a Muscle Hill colt, you’re going to pay $100,000,” said the Pennsylvania-based owner. “Our main focus is the Indiana Sires Stakes program. I just like the style of racing out here. The breeders have stepped up and it’s nice to buy yearlings that are also eligible to races in Delaware, New Jersey, and other states.”

The racing and breeding community stepped up in a big way to support one of their own during the sale. Amy Miller, daughter of Legacy Lane Farm’s Duane Miller, has been diagnosed with leukemia, and a raffle was held to help defray the costs of treatment and an upcoming bone marrow transplant. $13,500 was raised during the raffle, and Bluestone Farm stepped in to offer a 2017 breeding to Always A Virgin, which was raffled off for another $12,000, bringing the total raised in less than 48 hours to $25,500.

“Honestly, that was the highlight of the weekend,” said Cross. “I knew the harness racing community would step up, but they hit the ball out of the park.”