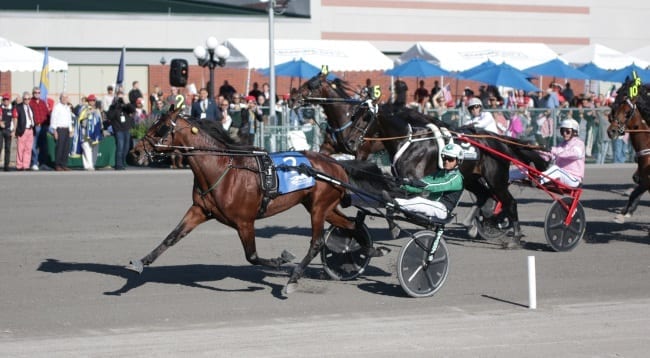 Hans Enggren, 87, is relying on his second pacemaker after the first sustained him for 13 years. The second device, in its fourth year, was severely tested on Saturday (Oct. 15).

The octogenarian owner watched Resolve take command early and rule the $1 million Yonkers Invitational Trot in a scorching world-record time of 2:23.4 for the mile-and-a-quarter over Yonkers Raceway’s half-mile track.

Italian-bred Oasis Bi was a non-threatening runner-up. Flanagan Memory of Canada rallied to be third followed by On Track Piraten and Explosive de Vie, both from Sweden, in fourth and fifth, respectively.

If Enggren’s pulse rate soared as he watched Resolve’s pulsating effort, he was the picture of contentment when he was interviewed in the winner’s circle on a perfect autumn afternoon.

He said of gaining the triumph long after many owners would have slipped quietly from the game, “means that I am extremely grateful for the trotting horse. I’ve been associated with this since 1939 in one form or another.”

Enggren recalled his rise from humble beginnings in his native Sweden, noting that he used to ride his bicycle to the track to sell tip sheets and programs. He said he has owned horses for the last 70 years and has bred them for almost half a century.

“I’ve had a wonderful ride with the horse,” he said.

He first arrived in the United States in 1952 to work for the Swedish government. He came to stay in 1957 and now lives in Abbottstown, PA.

Enggren has long possessed a great mind for the racing business. He bred and owned Prakas, the 1985 Hambletonian champion. He spotted Resolve when he walked by the barn of trainer Roman Lopez while the horse was being bathed at the South Florida Training Center in November, 2013.

He could not take his eyes off the son of Muscle Hill out of the mare Anikawiesahalee. The two-year-old captivated him in every way. His eye — and his gut — told him he had to have him.

Negotiations dragged on for months. Enggren was relentless, unwilling to accept ‘no’ for an answer. Finally, he got the response he wanted.

The International marked Resolve’s 15th victory in 50 career starts and pushed him beyond $2 million in lifetime earnings. And he made it look easy as the even-money favorite, paying $4.20 to win.

“He did everything himself. I was just a passenger,” said Ake Svanstedt, his trainer and driver. “Once he got the lead, he was very comfortable.”

Then Svanstedt, self-effacing and soft-spoken, made a big statement. “I think he can go faster if I drive faster. He was not tired and he came home fast. He’s an amazing horse.”

Oasis Bi had the early lead snatched from him by Resolve, who was unrelenting through fractions of :57.1, 1:26 and 1:54.4. Erik Adielsson, driving Oasis Bi, waited in vain for the leader to weaken.

“It felt good to be second,” Adielsson said. “I was happy with the horse’s performance.”

Resolve, starting from post two in a field of 10, had his task made easier when Hannelore Hanover, bidding to become the ninth mare to win the International, broke stride shortly after the start. She had drawn the rail.

Hannelore Hanover was racing for the first time on a half-mile configuration. It showed.

“She didn’t handle the turn as well as we had hoped,” said Yannick Gingras, her driver. “She was good warming up.”

Gingras saluted the winner in saying, “He’s a great horse. He’s much the best. Even if I had stayed trotting, he was the best horse on the racetrack.”

With this eye-popping result, Enggren’s phone is likely to ring even more. He said he has received numerous inquiries, including one extremely persistent caller, about the horse’s availability for sale.

“I started to recognize the phone number. I say, ‘If you’re calling about Resolve, we can talk, but he’s not for sale.’”

Enggren looks forward to seeing what Resolve can do for an encore in the Breeders Crown at the Meadowlands. He said future plans call for a return trip to compete in the Elitlopp after a second-place finish to the great Nuncio this year, a move being urged by Svanstedt.

“He does so many good things for me, I can’t very well say no,” said Enggren.

He praised Svanstedt for his role in continuing Resolve’s development. “They work together so fantastic,” he said. “I don’t think I ever have another pair like that.”

The International was first run in 1959 at now defunct Roosevelt Raceway. Tim Rooney, president and CEO of Yonkers Raceway, revived it last season after a 20-year absence.

Enggren expressed the hope that the International will grow until it can be compared to the most prestigious trotting races in the world. He reiterated his determination to reject any offers for Resolve that might be forthcoming, no matter how grand they might be.

“If I’m that lucky at my age,” he said, “you can’t sell something like that.”