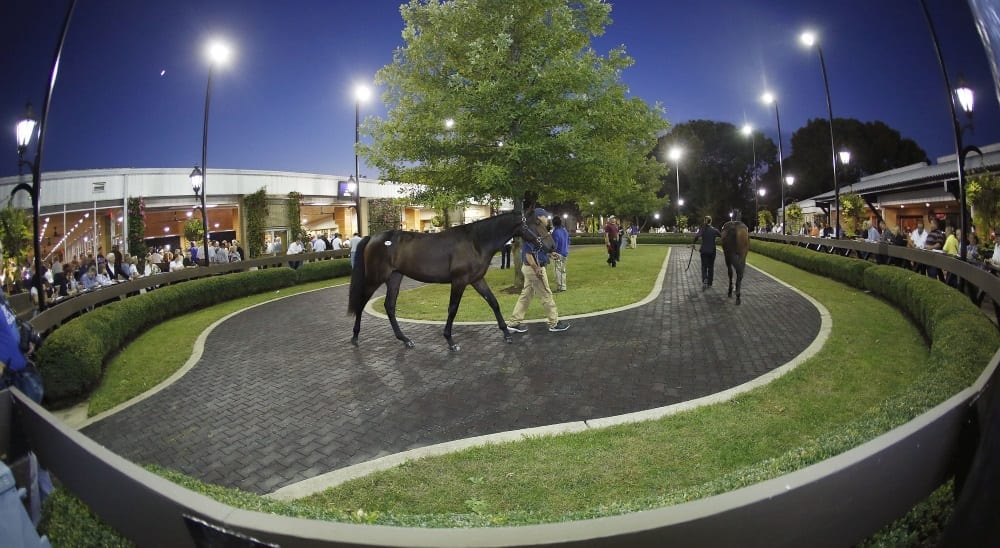 Randy Manges said he “couldn’t be more thrilled” with the results from the third session of the Lexington Selected Yearling Sale held Thursday night (Oct. 6) at the Fasig-Tipton sales facility in Lexington, KY.

“The cumulative average is up 22 per cent over last year. That’s really huge, actually,” Reid said. “The money is up 12 per cent.”

That’s with 31 fewer horses being sold this year.

Manges said there’s a good chance the sale will continue to be up after tonight’s session, too.

“We’ve got a lot of nice Ohio-breds, we’ve got a couple of really good Indiana-breds so they should sell well. And we’ve got some very nice trotters selling on Saturday. The Europeans will be here.”

The second-highest yearling sold Thursday was Night Rhythm, a Muscle Hill colt out of Tail Of Night purchased for $160,000 by Greathorse MA of Enfield, CT, a stable operated by the Antonacci family of Lindy Farms fame that own and operate GreatHorse golf course in Hampden, MA. The purchase, from the Kentuckiana Farms consignment, came just hours after the Antonacci family’s colt International Moni won his International Stallion Stake across town at Red Mile in 1:53.1.

“It was just a great day, one of those perfect Red Mile days that everybody likes to have. The sun was out and the track’s great. It’s a day you like to have, just a great Lexington day,” said Frank M. Antonacci.

“There’s nothing that breeds confidence better than success at the track or having a winner,” said Reid, who owns a piece of International Moni. “People love winners and it’s great for the emotions and great for the soul.”

Night Rhythm is the third yearling Greathorse MA has purchased at the Lexington sale, following the Somebeachsomewhere colt out of Western Silk named M A P they purchased on opening night for $85,000 and the Muscle Hill—Say What colt Southwind Slate they bought for $90,000 in the opening session.

“Our over-arching plan is to try to buy colts that could be interesting stallions,” Antonacci said. “(Night Rhythm) is what we think is one of the classic pedigrees and he is maternally inbred.

“We were keyed in on him since earlier this week, but it never hurts to have some good feelings with the whole crew when you’re going in to buy one.”

Reid said racing at Red Mile may have delayed the sale crowd a bit, but it, ultimately, did not affect the bottom line.

“It was a bit slow in the very, very beginning, but it rolled on through afterwards. I talked to many of the consignors tonight and they all seemed pretty satisfied and, more importantly, for the buyers I think the sale has been running at a great pace. It’s been a very smooth sail, from an operations and auction point of view and I just think things are very solid through the middle here,” Reid said.

“I really look forward to the next two sessions. We’re through 389 hip numbers and the market is holding strong and I’m overall very pleased.”