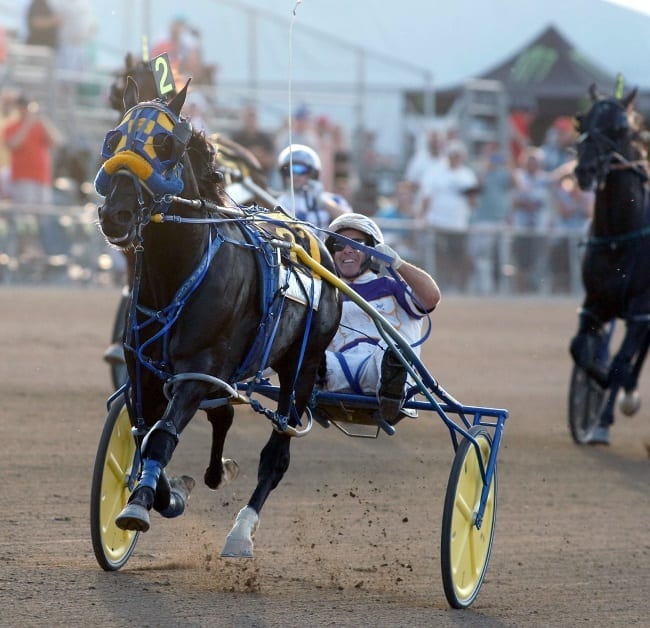 “He’s not probably the best horse (I’ve trained), he’s definitely the best horse I’ve ever trained, no question. And I’ve had a lot of nice horses, and love them all,” said Coleman who won the 2012 Jug with Michaels Power and the 2013 edition with Vegas Vacation. “He never gets tired this horse. He doesn’t blow after a race… There’s been many times that I haven’t been an overly happy camper with where he was sitting coming around the last turn, like at Mohawk, but he just mows them down. His heart – he doesn’t want to lose, he just loves to win. I’ve never been fortunate enough to train a horse this good, and I don’t think many have.

“Heart, intelligence, speed, his will to win, his conformation – he’s just a perfect animal. If I was to think of one thing I’d change on this horse, I really couldn’t think of anything. He’s just an awesome animal. You don’t get one of them very often.”

While undeniably impressive, Betting Line’s Jug victory in the race’s 71st edition is officially under protest with the Ohio State Racing Commission after other Jug trainers alleged there may have been a plan to treat the son of Bettor’s Delight—Heather’s Western on Jug Day in violation of the rules (see story pg 5).

While Coleman said the controversy did dampen her connections’ celebrations, nothing could diminish her love of Betting Line or the Jug.

“This isn’t the biggest purse race, but this means more to me than the North America Cup, which is a million-dollar race. It’s just a great day to be here,” she said.

“I wish I could go back on live (simulcast) and say, ‘This one’s for you, Ross,’” Coleman said. “There was a lot going through my head at the same time, but Ross has been one of the first owners ever with me and he owns half of every horse (I own). West Win Stables is me and Ross and his wife Margaret. Ross got very sick and had to have heart surgery a few months back and couldn’t make it here and it’s just killing him not to make it here. Anyone that knows Ross Warriner, knows that he’s at every race there is. Margaret was here today. My bookkeeper April Campbell was kind enough to drive her down and share a hotel room with her to make sure she was here for the horse.”

‘Ross had a heart operation, but he’s watching it. He’s recovering at home,” she said. “He’s thrilled. I’m his representative.”

Standing beneath the old grandstand on their way to the exits, Steve Calhoun and Nichol were holding the Jug trophy and marveling about how easy Betting Line made it look.

“That was about as stress-free as you could possibly have,” Calhoun said of the six-horse final, which Betting Line won by eight lengths over second heat winner Western Fame. “At the three-eighths pole, I was just hoping no equipment falls off, because short of that we were going to win. You could see Dave had a ton of horse, so I was pretty sure we were going to win the race. It was really fun to watch him in action, just watch his power without having to worry that he was eight lengths back at the three-quarters and wondering if he was going to get there or not.

His elimination was a dream, too. If I could have dreamed it up at home that would have been it. Beautiful cover, Lyons Snyder took him around the turn very aggressively and then we were able to pop off. It just couldn’t have worked out any better.”