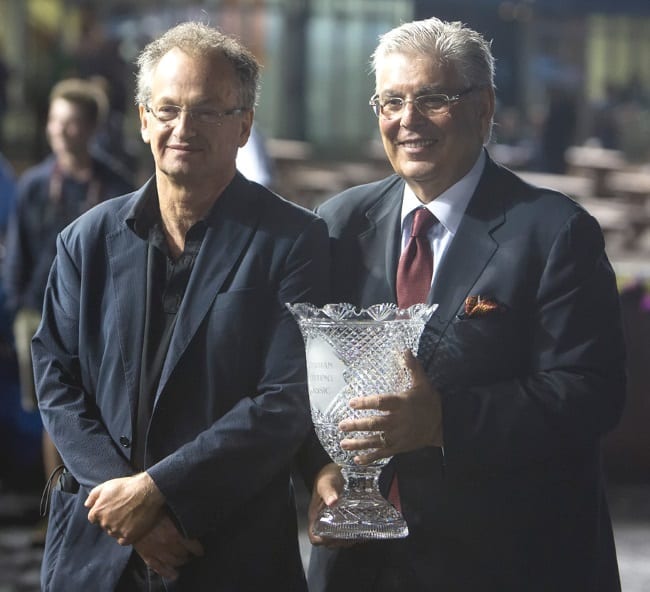 When Bar Hopping passed Marion Marauder in the stretch to win Saturday’s Canadian Trotting Classic, it set off a wild, destructive celebration at his connection’s dining room table at Mohawk.

When Bar Hopping left Hambletonian winner Marion Marauder in his wake in the stretch of Saturday’s $687,000 Canadian Trotting Classic (CTC), the colt set off an explosive celebration in the Mohawk dining room at his connection’s table.

“There was wine and broken wine glasses everywhere,” said Lynne Katz, wife of Bar Hopping’s part-owner Marvin Katz of Toronto. “We were so excited.”

“Nights like this are just pure exhilaration,” Marvin said.

Bar Hopping defeated Marion Marauder by three-and-a-half lengths to give trainer Jimmy Takter his third straight CTC victory to go with wins by Pinkman in 2015 and Father Patrick in 2014. The trainer has won the race five times in his career.

“We’ve got a lot of partners and great partners, so I’m so happy for this win,” said Takter in the winner’s circle. “I was due to win a big race with this horse because he is a very nice horse.”

Owned by Christina Takter, Hatfeld Stables, Marvin Katz and Al Libfeld, Bar Hopping is now a five-time winner from 13 starts this season for nearly $800,000 in earnings. The son of Muscle Hill out of Cocktail Hour improved his career totals to six victories and $901,048 earned (by Standardbred Canada accounting).

Bar Hopping was able to convert off a perfect second-over steer from driver Tim Tetrick to win Canada’s biggest race for three-year-old trotters.

A trio of longshots fired out for the front, while Marion Marauder, the 3-5 favorite, was unhurried and got away fourth ahead of main rivals Southwind Frank and Bar Hopping.

Scott Zeron sent Marion Marauder to the front in the second-quarter and took the lead at the half in :55.4. Southwind Frank was pushed first up, which allowed Tetrick to put Bar Hopping in a perfect second over position. Marion Marauder led the field by the three-quarter pole in 1:24.2.

In the stretch, Marion Marauder created a little separation on his rivals, but that was quickly erased by Bar Hopping. The Takter trainee fired off cover and powered by in the final-eighth for a 1:53.1 victory.

“There was enough speed in there and I was trying to find a good horse to follow,” said Tetrick following his second Trotting Classic victory. “I saw Yannick (driving Southwind Frank) was not getting away as good as I think he wanted and I got a good trip following him all the way to the promise land.

“Scotty’s (Zeron) horse was putting up decent enough fractions and my horse got to track him all the way to the top of the lane and he did the rest from there.”

Bee In Charge finished third ahead of Winter Harbor.

Bar Hopping captured his elimination last week in 1:52.4 and was sent off at odds of 4-1 in Saturday’s rich final. The sophomore trotting colt has had a strong season, but has been slightly overshadowed by rivals Marion Marauder and Southwind Frank, who had captured the classic three-year-old events before the Canadian Trotting Classic.

“Well he’s been really close, but he just hasn’t got it done,” Tetrick said. “It’s not lack of trying. He put it all together tonight and there is still a lot of money to go for the rest of the year.”

Takter noted that Bar Hopping will now head to The Red Mile in Lexington, Kentucky for Grand Circuit action.