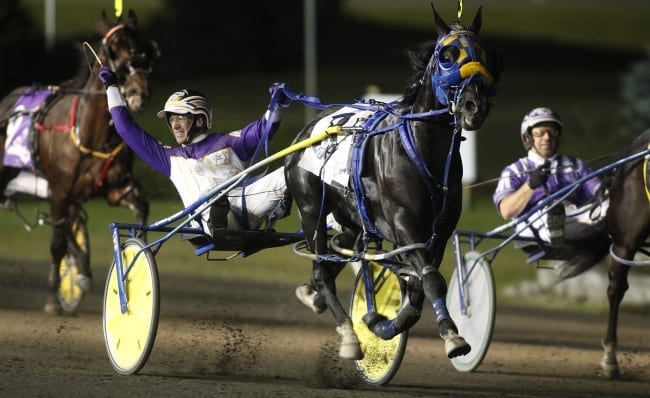 Casie Coleman said a deal to stand her star sophomore pacer Betting Line at Hanover Shoe Farms gives the pacer a great chance to succeed as a stallion.

Casie Coleman said the chance to stand her stellar sophomore Betting Line at Hanover Shoe Farms was too good to pass up.

“Number one is all their mares. They’ve got some of the best mares in the world, a very strong broodmare band. So, he should get plenty of opportunity with the kind of mares they’ve got there,” said Coleman, who trains the pacer and owns him with fellow Ontarians Ross Warriner, Mac Nichol and Steve and Christine Calhoun.

“The biggest thing is pretty much all studs their first couple of years get plenty of mares booked to them, but the big thing is to make sure they hit, because if they hit, you’re golden. If they don’t hit, no one is going to want them anymore. With the kind of mares Hanover Shoe Farms has said will be coming Betting Line’s way, we’re really excited about the opportunity that he’s going to get.”

The famed Hanover, PA farm announced Friday that Betting Line would join its stallion lineup at the conclusion of his 2016 racing season, meaning the colt is not scheduled to race beyond his three-year-old campaign.

Betting Line is currently riding an 11-race win streak heading into this week’s Little Brown Jug in Delaware, OH. The son of Bettor’s Delight out of the Western Hanover mare Heather’s Western has earned more than $1.5 million lifetime in 24 starts and sports a mark of 1:47.2f and a record of 11-1-0 in 12 starts this year for earnings of $1,090,810. Betting Line won the sport’s richest sophomore pacing event when he posted a 1:47.4 victory on June 18 in the $780,000 ($1 million Cdn) Pepsi North America Cup at Mohawk. The pacer has also won the $300,000 Carl Milstein Memorial at Northfield Park on Aug. 13, the $500,000 Battle of Brandywine at The Downs at Mohegan Sun Pocono on Aug. 20 in his career-best mile and four lucrative Ontario Sires Stakes Gold Series events.

Coleman, who purchased Betting Line for $60,000 at the 2014 Standardbred Horse Sales Company sale in Harrisburg, PA, said it was after Betting Line’s performance in the Battle of Brandywine that had the major breeding farms calling.

“Ever since he won at Pocono there’s been quite a few different farms calling and showing interest,” Coleman said. “We’ve just been weighing our pros and cons and trying to decide what’s best for the horse and we ended up deciding on Hanover Shoe Farms.

“In (Pennsylvania) everything is very strong in that state right now it seems like. And it’s also the American dollar. My other stallions are, obviously, in Ontario. We’ve had very good luck. I love standing them here — Sportswriter and Betterthancheddar. But it’s almost a 30 per cent difference on the dollar right now. So, that’s another factor that obviously came into play. I’ve bought horses from Hanover over the years, but I’ve never had a stallion with them. They’re pretty much the cream of the crop with all the studs and mares they’ve had over the years.”

Coleman believes Betting Line will pass on plenty of power to his offspring.

“I’ve trained some great horses in the past and nobody even comes close to him,” she said. “He definitely blows away horses like Sportswriter, Betterthancheddar, McWicked, Art Colony with his sheer speed and the determination he has to win. There’s many races he should have been beaten from the position he was in and he just kept digging and got it done. He can do it any way you want — wire-to-wire, dead last, he’s been parked, he’s been first up. You name it, he’s done it. He’s got great conformation. Anybody that looks at him, he’s a really, really good-looking colt with great conformation. There’s not much to dislike about him and he’s very, very well-bred also.”

The trainer said getting the stallion deal done with plenty of racing left on Betting Line’s schedule was simply about taking the opportunity when it came along.

“I’m very confident in the horse and I feel confident that he’ll finish the season strong… But if you get a chance to get in with a farm like that, you take it when the chance comes,” she said.

Coleman said Betting Line is due to train this morning (Saturday, Sept. 17) and then ship to Delaware, OH for the Jug on Monday morning.
No word, yet, on Betting Line’s stud price.