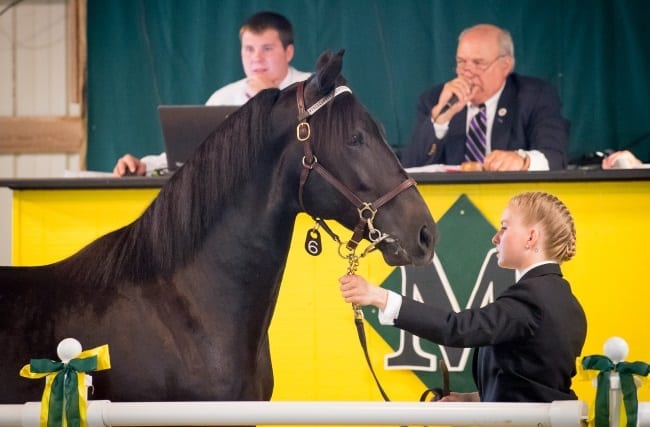 More than 700 yearlings will go through the auction ring this weekend at regional sales in Ohio, New York and Ontario. But will the glut of sales and the logistical challenge that may cause for buyers impact prices?

Sale organizers admit it’s not ideal that there are four yearling sales this weekend starting with the Ohio Selected Jug Yearling Sale in Sunbury, OH today and Saturday, the Morrisville College Yearling Sale on Saturday and both the Goshen Yearling Sale and The Canadian Yearling Sale Sunday in Middleton, NY and Hamilton, ON, respectively.

“I think it was a little unfortunate this year, because of certain scheduling conflicts,” said Bob Boni, president of the Goshen Yearling Sale to be held at the Mark Ford Training Center. “It really couldn’t be avoided. It’s very easy for those not involved to say ‘they should have done something’ but there weren’t a lot of opportunities the way it worked out. I’m hopeful that next year something can be done differently, and we can work it out so it can be more functional for people.”

Preferred Equine’s David Reid, who will sell horses at Morrisville and The Canadian Yearling Sale operated by Standardbred Canada, said avoiding a sales logjam “would have been beneficial to some of the parties… I think that could have been avoided and should have been avoided,” but, he added, “Even though it’s not an ideal situation this weekend, I’m sure the yearling buyers will bite the bullet for one weekend and just work extra hard to attend the sales or make arrangements with other sources to cover their bases at the sales if they can’t be there themselves… I know some people will have somebody bid on some for them. I think the astute horsemen who are going to be buying yearlings know how important it is to do their homework because these are the future stars of their stables. I don’t think they’ll short themselves any effort. For one weekend I’m pretty confident they will try to cover their bases.”

Michelle Crawford of Crawford Farms of Durhamville, NY said she wishes something could have been worked out to avoid the four sales being on the same weekend. “I honestly am disappointed that I can’t physically get to the other sales that I’d like to go to and experience… I’ll be diplomatic because I’m really tired of fighting, but I had to leave my allegiance to what I thought was the strongest sale, Morrisville,” she said.

The Morrisville sale, which began in 1989, provides critical financial support to the Morrisville Equine Program at the Morrisville State College, one of the few post-secondary programs that has proven to produce students that work in the standardbred industry.

“I walked into my barn today where my consignment was set up and I had seven girls there. I was excited to meet them and talk to them and they’re excited to be there and help,” Crawford said. “I don’t know if anyone else gets that. These kids are starving for this. They look forward to this all year long. You can’t deprive them of that.”

Hanover Shoe Farms is selling some of its yearlings at Goshen and the Ohio Sale this year. Had the Goshen Sale been last weekend to avoid the conflict with Morrisville, Hanover would not have been able to sell at Goshen due to the Pennsylvania Sires Stakes championships for two-year-olds held Sunday at Harrah’s Philadelphia.

“Having the sales all on one weekend obviously isn’t good, but speaking from Hanover’s perspective, we just had no choice. We couldn’t have gone last week, as it was conflicting with all the Pennsylvania finals,” said Hanover publicity director Murray Brown.

“Actually, if they weren’t going day to day, we probably would have sold some at each,” Brown said, referring to both the Goshen and Morrisville Sales. “Back to back just makes it an impossibility in terms of manpower, especially with Ohio the day before.”

This weekend is the unofficial kickoff of the big yearling sales season and Reid said the results will be something of a barometer for bigger sales to come in Lexington and Harrisburg.

“This weekend of sales will set the tone a little bit, for what the market is going to be. You always get concerned about the overall economy, concerns about an election year… We’ll get through this weekend and then we’ll see what the pulse is, but I anticipate Lexington being a very healthy sale,” said Reid who is the co-sales manager of the Lexington Selected Yearling Sale that runs Oct. 4-8 at Fasig-Tipton. “The Lexington catalogue is out and I’m very pleased with the whole catalogue from a Lexington Selected sales manager point of view.”

Though this weekend’s sales glut will undoubtedly provide a logistical challenge to potential buyers, Boni said those looking to run successful operations owe it to themselves to look at as many horses as possible, wherever they sell.

“You’ll hear me say this time and time again. If this is the business you’re in, and you don’t spend the time to look, you are really doing yourself a disservice and the people that operate for you a disservice,” Boni said.

“I know from doing this all my life. If this is the business that you’re in and you don’t show up at these sales, whether it’s our sale or one of the others, it’s kind of inexcusable. That’s where you are going to get your inventory from and there’s nothing worse than passing up on something that you didn’t look at because you didn’t take the time to. And that includes people at sales because, once you’re there, why don’t you just look at anything you can look at? I guess it’s a little bit of a pet peeve of mine, that horses do get overlooked because people don’t look at them. And it’s for a variety of reasons, the stupidest of them being that it’s going to bring too much money. That’s kind of silly. It’s one of the few things in our business that we basically don’t get charged for, and that’s looking at horses.”

Boni said the Goshen catalog is strong for anyone, “looking for a more moderately-priced horse. I’m not making any other representations that it’s anything other than that, but there’s certainly some nice yearlings in there that are already brothers and sisters to those that have performed.

“There is a good variety and you’d like to think that people will come and look. And if you come and look, you’re going to find something. That’s been a policy of mine for a long time – if you’re going to pay attention and look at what’s out there and you take the time, there’s brothers and sisters to pretty successful horses.”

“I believe I have a very nice group of horses going up there, good individuals with a lot of first foals, good pedigrees. Conformation-wise, I’m very happy with the group that’s going to be selling at Morrisville,” he said. “The same could be said about Standardbred Canada’s sale. We have a great representation of yearlings there and for their regional program in Ontario, I think we have a strong group of individuals and, obviously, it’s probably going to be highlighted by the Kadabra brother to What The Hill. The numbers are pretty consistent up there and I expect both markets to be pretty healthy this weekend.”

Last year, The Canadian Yearling Sale was up 69.5 per cent in average mostly on the strength of the Ontario Sires Stakes program, the lucrative Ontario Resident Mare bonus program and a lower number of available Ontario-sired horses. Reid is expecting more of the same this year.

“I just seems like the industry, as far as the government is concerned, has much more stability than there was in the past few years and the number of overall yearlings being offered for Ontario is probably similar to last year or maybe slightly down… so from that point of thinking, I assume we will follow suit and I actually think there might be even a little more anticipation for the sales than there was last year,” Reid said.

Prices in Ohio should be positively impacted by the growth of the Ohio program under video lottery terminals (VLTs).

“We’re selling all of our Ohio-breds in Ohio,” Brown said, referring to Hanover Shoe Farms. “We have a few very nice ones and maybe a couple that aren’t as nice, but generally speaking the strength of our Ohio allotment is Dragon Again. He brings a new dimension to Ohio, I think. He’s proven to be, if not the foremost sire, then one of the key sires in the pacing world… We have one Pet Rock yearling, who I believe is outstanding. Of course, it’s the first crop of Pet Rock. I’d hear that generally speaking they are very nice horses, and the one we have is certainly very nice.”

Brown said Hanover’s consignment at Goshen is “very solid. We’ve got representatives of all the major sires, of both New York and Pennsylvania. And if I were to pick one real standout colt, it would be number 59. He’s an RC Royalty colt, first foal from a mare called Variety Girl. It’s a top-bred mare and he’s the kind of colt I call a ‘mouth-waterer’, he’s just gorgeous. Big, beautiful, very dark horse. He has a great presence and trots really well in the paddock. If I were to pick one, he’d probably be the one. But we’ve got nice yearlings from Roll With Joe, American Ideal, Andover Hall, Cantab Hall, Muscle Massive. I think they are a very solid group.

Crawford said she is hoping for big things from her consignment at Morrisville.

“I’m super happy. I think it’s the strongest consignment for Morrisville that we’ve ever had,” Crawford said. “I think if we get the same attendance that we’ve had in years past that we’ll have a very solid consignment with even more to offer.”

All of which gives yearling buyers a lot of choice.

“I think, at the end of the day, customers are going to be able to go to both Morrisville on Saturday and Goshen on Sunday, and due to the size of the catalogs that should be a very do-able thing to do,” Reid said.

Brown said the interest in Hanover yearlings has been brisk and some potential customers were planning to attend all three U.S. sales.

“We had a couple of people (at Hanover) yesterday who said they would be going to all three of Ohio, Morrisville and Goshen. Now, I’m not too sure there will be many people that will do that, but I think the major conflict will be between Morrisville and Goshen, because they are, to a large degree, selling the same type of horse,” Brown said.

As for the future, Reid said there has already been some dialogue between sales parties.

“I would assume next year the sale company representatives will try to work a little more closely with each other. Some of it is subject to the race calendar, so it’s hard to say, but I assume there will be some general consensus done next year among the companies,” Reid said.

Boni said he is already honing in on a date for Goshen.

“Next year, it looks like September 10th could be a reality (for the Goshen sale),” Boni said. “Hopefully we can work something out… similar to the old Jersey Classic years ago, It used to be always the next weekend after Labor Day. Now, the only difference is, back then there wasn’t the abundance of racing that you have now.”

Crawford said maybe the Morrisville sale could move to August.

“Could we get the yearlings prepped one month sooner so it doesn’t interfere with everything?” she asked.

All of which provides hope that yearling buyers won’t be torn in four different directions a year from now.