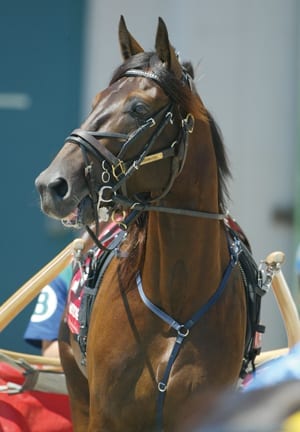 Numerologists believe the number 8 represents balance and power, a sort-of karmic equalizer that evens the keel between the material and immaterial worlds.

That might be pushing it a bit, but there’s no denying there was some magic in numbers 10 years ago this week when trainer Blair Burgess brought a $10,000 yearling named Glidemaster, number 88 in the sale, to the 81st Hambletonian.

He drew the eight-hole in Race 8 and demonstrated a champion’s balance and power en route to a then stakes and track record 1:51.1 performance over rivals Chocolatier and Blue Mad Lad. A few months later, the horse would become the eighth in history to win the trotting Triple Crown.

Two weeks prior to Hambletonian Day, it certainly didn’t look like it was going to be in the cards for Glidemaster, who stepped on a nail, after pulling a horseshoe loose in his stall, puncturing the outer rim of his hoof.

Burgess remembers sleepless nights for both he and his wife, Karin — both co-owner and round-the-clock caretaker of the horse — prior to the elimination and the final as they worked to nurse the colt’s foot.

The situation made for a stressful few weeks, which did not relent until approximately an hour before post-time.

There were all the usual hallmarks of the big day at the Meadowlands, with a crowd closing in on 30,000, a throng of international media, and even heavyweight champion George Foreman waiting to bestow the Hambletonian trophy, but suddenly there was a wash of serenity.

“It sounds funny, but the most confident I felt the whole day, or the whole week beforehand, was in the last hour before the race,” said Burgess, who was significantly bolstered by Glidemaster’s warm up.

“Maybe I was imagining it… but I watch other horses warming up in big races sometimes just to see who’s sound or sore or fresh or who’s too aggressive. And I think other trainers probably do the same. I’m pretty sure a couple guys noticed (Glidemaster) that day. I know I turned a couple of heads when he warmed up,” said Burgess.

“I don’t always put stock in that, but that day he just warmed up so well. He was so sound and happy with himself before the race. I remember telling John (Campbell), ‘the horse has really come around today.’”

Beyond how smart Glidemaster looked on the track, a vivid memory for Burgess was the horse’s demeanor in the front paddock prior to the race. He didn’t sweat. He didn’t shake. He was relaxed, yet still attentive. It just all came together.

Almost eerily, Burgess reports the exact same thing occurring with his first Hambletonian champion, Amigo Hall, who won at odd of 27-1 in 2003.

In the middle of chaos, both horses had an epiphany of calm.

“Both times I raced horses in the Hambletonian, that day something must have lined up right because both horses had a collective peace about them, for some reason. They both just stood in that front paddock and were so relaxed and so attentive, and both warmed up so well,” he said.

“Both horses just came into the right place at the right time. Those horses had their idiosyncrasies, but not on that day. They just seemed to know that was their day.”

The trainer’s relative calm was interrupted as the race unfolded and he watched his horse far back and third-over for much of the mile. Then suddenly, around the last turn, Campbell, in search of his sixth Hambletonian, found Glidemaster some room and moved within striking distance. From that position, no one was going to out-trot him to the finish line.

“There’s nothing quite like the Hambletonian. I’ve won a lot of big races with John, but he doesn’t get happier than he gets on Hambo Day. He was a foot off the ground after the race,” remembered Burgess, with a laugh.

The victory marked a comeback for Campbell, then 51, at the time, as he had suffered through a nearly career-ending injury in 2003 and did not return to racing full-time until 2005. Sadly, a horrific accident in the Breeders Crown eliminations two months after the 2006 Hambletonian would prevent Campbell from joining Glidemaster on the remainder of his Triple Crown journey.

However, the horse soldiered on and completed the rare feat with George Brennan in tow as he claimed the Yonkers Trot in late November for owners Bob Burgess, Karin Burgess, Marsha Cohen and breeder Brittany Farms.

In a season where he never finished worse than second in all 15 starts and set a then earnings record of $1.979 million, Glidemaster would go on to be named Horse of the Year for 2006 and was retired to stand stud where he has sired champions such as Maven and Blue Porsche.

In hindsight, one of Burgess’ bigger regrets is not bringing Glidemaster back to the races at age four.

“I think he would have been a supreme four-year-old. Probably the best the horse ever was… he was better in the Yonkers Trot that he was on Hambletonian Day. Off a six-week layoff. Cold weather. At the end of the year. Parked most of the mile, but it was also a track and stakes record (1:55.4) in his first time ever on a half-mile track.”

Ten years on, Burgess admits to a bit of melancholy now creeping into his thoughts. Still the only trainer with two Hambletonian and two Meadowlands Pace champions to his name, he says the passage of time, changes in the industry and his own much smaller stable numbers typically prevent his mind from wandering back to Glidemaster’s great victory with any regularity.

“But when I do think about it, if I watched the replay again or something, you can still get a little pumped up,” he said.

“He was a superior animal, no doubt about it.”