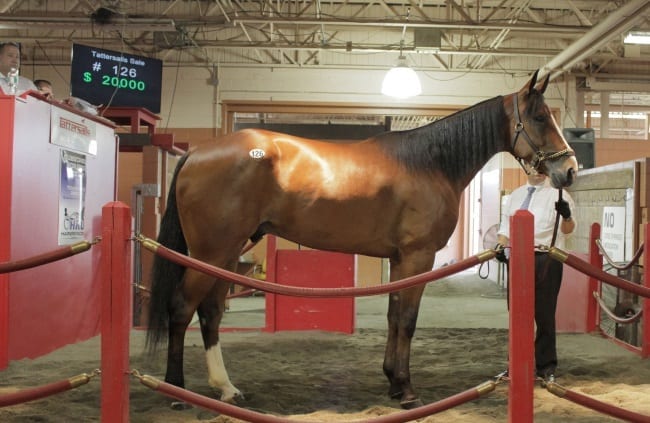 Michelle Crawford wasn’t planning on buying anything at Sunday’s Tattersalls Summer Mixed Sale at the Meadowlands, but ended up being one of the leading buyers.

story by Dave Briggs, photos by Aaron Re

When the weather didn’t cooperate to go boating Sunday, Michelle Crawford resigned herself to celebrating her birthday with a quiet day at home. Before she knew it, she was perusing the catalog for the Tattersalls Summer Mixed Sale at the Meadowlands when she stumbled upon a broodmare find. A few hours later, Crawford had purchased two horses — including the second highest sold, Hillsonator — and was the second leading buyer at the sale in which 141 horses grossed $2,250,200 for an average of $15,846.

“I had looked at it earlier and I just decided that we’ve had some big investments lately. So, I was going to not pay too close attention, but I can’t help myself. So, I started from the back of the book and I went forward. All of a sudden I saw (hip) 45, Traceuse Hanover and I said, ‘Wait. Look at that pedigree. It’s a broodmare pedigree.’ I have Taiya Hanover, which is out of Trim Hanover. So, I love that family. I saw (Traceuse Hanover) is a Bettor’s Delight and started scrambling trying to find somebody that would be at the sale. We found (Chris) Tully sitting there. I said, ‘Can you go check and make sure she has four legs and two ovaries that are functioning?’” Crawford said, laughing.

Michelle’s husband Al was dutifully fulfilling some of the items on his “honey do” list around the Syracuse, NY farm when Michelle said she came running out clutching pedigree pages.

“He was on the excavator and he was like, ‘Ah, here we go. I thought we weren’t buying anything today,’” Michelle said. “Happy Birthday to me, right? Whatever he got me, I think he took it back. He said it was a lot cheaper than a horse.”

“Chris (Oakes) called me up and he said, ‘I’ve watched this colt and talked to a few people and I think he’d be a really good addition. He, obviously, could race and travel around with Homicide Hunter. I really like him, would you guys be interested?’ So, we took half of him and Chris took the other half,” Michelle said.

Hillsonator, a four-year-old gelded son of Muscle Hill out of Wilsonator, has earned over $100,000 with a record of 8-8-1 in 22 starts this year racing at Mohawk for trainer Robert Fellows.

The sale topper was four-year-old RC Royalty—O Dana O mare Summers Windsong that was bought back for $95,000 by Preferred Equine Inc., agent, the sale’s leading consignor.

Preferred’s David Reid — who is also the sale manager — said the mare was bought back by some of her owners in order to form a new partnership.

“I anticipated a pretty decent sale. I think the barometer of the sale is not the two-year-olds as much as it is the older horses.”

“We knew we didn’t have the high-end horses (this year),” Reid said. “For whatever reason they’re harder to come by as the years pass. But, we can only market what we have to offer and what we had to market today sold reasonably well. The marketplace really remained consistent for the products we had to offer and the results reflect that. Last year, I know we sold Propulsion for $210,000. We had another one bring $132,000 (Oneisalonelynumber). So, when you’re only selling 120 or 130 head, when you sell one big horse and you don’t have that one the following year, it’s going to affect your average.

“Overall, it was well attended. We had a large amount of two-year-olds that were offered. I haven’t really analyzed it, but, generally speaking, horses that are racing competitively are going to bring more than unraced horses. The marketplace is what it is and we’re going to continue to strive to improve our product and move forward from here.

“On behalf of Tattersalls and Preferred Equine, we really want to wish all the buyers best of luck. More importantly, we want to thank the people that consigned the horses, the sellers. We really want to be the marketplace that brings buyers and sellers together.”