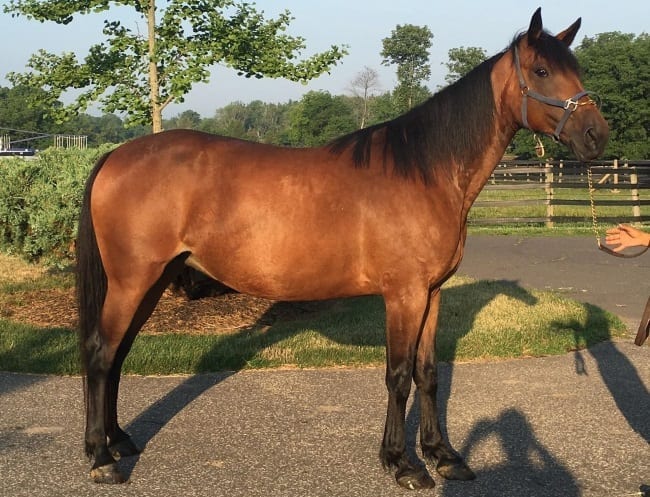 Al Crawford said the chance to purchase the dam of Hambletonian favorite Southwind Frank was too good to pass up.

On Friday, Crawford Farms of Durhamville, NY completed the deal to purchase Flawless Lindy from Southwind Farms of Pennington, NJ. It was a whirlwind deal consummated in just a few days. Both parties declined to disclose the purchase price, but said the deal — while not inexpensive — was a fair one.

Southwind’s syndicate manager Mike Klau said Flawless Lindy was not being shopped, but was sold because the price was right.

“We were not actively seeking to sell her,” Klau said. “But, we got an offer that was hard to say no to. We are in the business of selling horses and we run Southwind as a business.”

Flawless Lindy is a nine-year-old Cantab Hall mare out of the Lindy Lane mare Clasically Designed. Flawless Lindy’s first foal was Southwind Frank, the two-year-old trotting colt of the year for 2015. Southwind Frank, whom Klau said was named for Frank Sinatra, not Lindy Farms’ Frank Antonacci — “That year we named all our yearlings after singers,” he said — has a career record of 14-0-1 in 16 starts with earnings of more than $1.1 million and a mark of 1:52.1.

“Obviously, (the success of Southwind Frank) was a huge motivator and watching how he was at Pocono last week, too. He was dominant there and in his two-year-old season. Ronnie (Burke) definitely has him in good form,” Crawford said. “The funny thing right now is we own Marion Marauder’s full-brother yearling. So, looking at Marion Marauder last night, you’ve got to think he’s coming into the Hambo with some steam and then you’ve got Southwind Frank on the other side. I think that’s kind of neat. I’m not sure who we will be rooting for between the two, owning the full-brother that’s going to sell in Lexington and having the mare with a full-brother or full-sister to Southwind Frank in her belly. It makes the Hambo extra interesting for Crawford Farms this year.”

Klau said the deal happened something by accident. Agent Ernie Martinez recently phoned to inquire if Southwind had any mares it wished to sell to an unnamed client. Not long after that, Southwind received an offer to buy Flawless Lindy from European interests. Klau said Southwind turned down that offer, but he phoned Martinez to ask if the Europeans were Martinez’s clients. They were not. Then Klau told Martinez that the offer for Flawless Lindy did not meet Southwind’s price.

“(Martinez) kind of haphazardly said, ‘What would buy her?’ I threw a number out and he said, ‘I can get that for you in two days,’” Klau said.

True to his word, the deal was done in two days.

“People say, ‘Why do you think they sold her?’ When you go two open years on a mare and you’re in the breeding business it can get a little bit interesting,” Crawford said. “We certainly don’t want that. Our whole thing is it’s an opportunity. There’s one in the belly that we pray we can get out, obviously. It’s a full brother or sister to Southwind Frank… I think it’s a really fair trade both ways and I think there’s risk on both sides.”

Klau said the answer to the question of why Southwind would sell Flawless Lindy is: “Why not?” He added that every horse is for sale at a price. “That’s the rule of the game. We try to run Southwind Farm as a business. It’s never a bad idea to take a profit.”

That the purchase came the same week as the Crawford Farms-sponsored Meadowlands Pace is simply good for business, Crawford said.

“That went into it a little bit. With (Southwind Frank) in the Hambo, I think we can do some advertising around that. I think it gives a little extra punch for us on the marketing side just this time of year… It lets people know we’re aggressively in the industry. Stop by our consignment, we’re really looking to upgrade and we’re working on it every year,” he said, adding that Crawford has grown from eight mares just seven years ago to 77 today. “

Klau said he wishes Crawford Farms nothing but success with Flawless Lindy.

“There’s no question we wish there were 10 more people like the Crawfords in the business,” Klau said. “They’re committed to the business, they’re investing a lot of money. We wish them the best of success.”