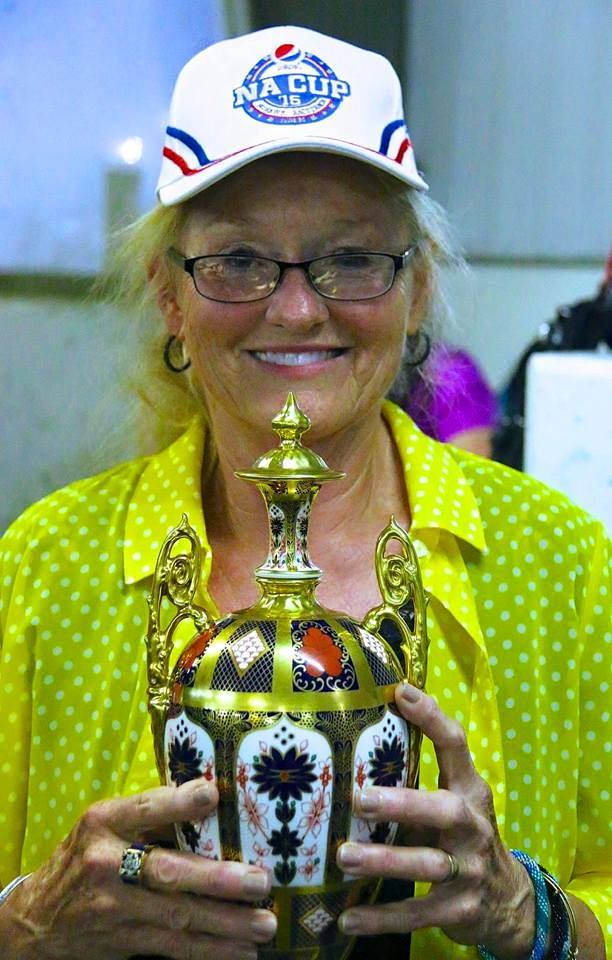 A year after Wakizashi Hanover won the $1 million (Cdn) Pepsi North America Cup his trainer, Jo Ann Looney-King, is still overcome with the enormity of the victory.

It was 363 days ago, but trainer Jo Ann Looney-King remembers a lot of what happened that evening. A whole lot, in fact.

Her Wakizashi Hanover upset Wiggle It Jiggleit, the pacer that would become the Horse of the Year, in the $1 million (Cdn) Pepsi North America Cup by three-quarters-of-a-length in 1:48. For someone who’s been training horses for 40 years alongside her husband Jim, and whose parents and parents-in-law also spent a lifetime in the harness game, that win was special.

“In the elimination, Wakizashi was giant,” said Looney-King. “But in the final, I said, ‘I know I’m going to be happy to be second because I know how hard it will be to beat (Wiggle It Jiggleit).’ Everybody picked Wiggle It Jiggleit, but that’s okay because he’s a great horse. But getting a good trip and having a driver that gets you in winning position is crucial for beating a horse like that. And that’s what we had. Tim (Tetrick) knows how to get it done. That’s certainly no secret. That was one huge key. It’s really funny how it’s so hard to get a horse to peak when you are going for that much money. It’s just an amazing thing when a horse peaks when he’s going for a million dollars. That’s just great timing. Sometimes you have nothing to do with that.”

The trainer was her usual excited, fidgety self at race time for the 2015 Cup.

“I’m pretty emotional during a race,” said Looney-King. “I don’t stand there or sit down and watch a race. I’m over here, I’m over there. If you can’t get excited about it, what are you doing it for? That’s part of the fun.

A year later, Looney-King is still overwhelmed by the enormity of the win and the effect it’s had on her life.

“To my dying day, I will think of that stretch run every day. To see our horse pull up beside a great horse like Wiggle and then go past him, is, I just don’t know. I didn’t want to leave the winner’s circle. We have the DVD of that race, and I’ve watched it numerous times. My grandson can actually announce the whole race. I was standing by Brenda Teague (connections of Wiggle It Jiggleit) at the time, and after the race, Brenda hugged me and congratulated me. We’ve been family friends for years. She was truly happy for us. So was George (Teague). I can still see that horse going by him.

“It was my greatest moment in the game. It’s been life-changing for us. We raced claimers most of our lives. We’ve done well. But when a horse like that takes you places you’ve never been before, it’s an amazing thing. We are not colt people. Colt people go out and they spend hundreds of thousands on colts. We don’t do that. We have raceway stock. So here comes a horse who takes you to the North America Cup. All I’ve ever done is sit home and watch it, and think, ‘Oh, wouldn’t it be nice to race in that?’ and never given it another thought. But then to actually be there and win. You can’t believe it happened to you. That was just a great, great night.”

But, like with all horsepeople, potholes sometimes appear on the smoothest super highways.

Wakizashi Hanover has yet to race as a four-year-old in 2016 after having a throat procedure performed to increase air flow.

“He’s got to tell us when he’s ready to go,” Looney-King said. “He qualified last week at Harrington. He had a throat operation. It had to be done, because he wasn’t going anyplace without it. We weren’t thrilled with his qualifier, so he’s going to qualify again next Tuesday at Philadelphia. He’s going to have to tell us what we are going to do next. We’re hoping he can go on. But he’s got to go out there and pace in 1:47 and 1:48. Is he going to be able to do that? Was his procedure successful enough? It’s something we are hoping for the best. Physically, he’s gorgeous. Always been a happy horse. Nothing bothers him. He can blend in anyplace in any stall after 10-12 hours on the truck. I’m hoping he gets the opportunity to race. We just don’t know yet.”

While waiting for Wakizashi to give the go-ahead for his return, Looney-King has other things to do, such as training the horse that beat 2015 Hambletonian winner Pinkman in the final leg of the Graduate Series at Tioga Downs on Sunday (June 12).

Maestro Blue Chip, a $90,000 purchase by Richard Poillucci at the Meadowlands sale earlier this year, was a determined winner on the front end in 1:53.4 with Looney-King’s go-to guy Tetrick driving. The four-year-old son of Credit Winner has now won 11 races this year in 12 starts and banked just under $200,000.

“That eight hole worked out good for us,” said Looney-King. “It was just our day. Pinkman (who finished fourth) left with us, he made the top, then we made the top and he raced in the two hole. We know Maestro’s got it in him. I don’t set myself up for disappointment, so I’m always thinking, ‘Let’s have a good race and leave with some money.’”

That they did, and they’ll go for plenty more in the $250,000 Graduate Final on July 9 at the Meadowlands.

Things are good for Jo Ann Looney-King, but everything hasn’t always been chocolate cake and roses.

“The first time I was sick was 30 years ago,” said Looney-King. “I had cervical cancer. But it wasn’t then like it is today. You couldn’t Google it. It was very scary. I had two little girls. My mom found me a good doctor, took me to Manhattan and I got fixed up. Later on, I had two more cancer scares. I just had a kidney removed three years ago. But I’m pretty good right now. There have been some issues, and I think, ‘How did I ever get through that?’ But you do it. You just do it. That’s what everybody does.”

She said she relies on her support system.

“My husband is one of the happiest people I know,” said Looney-King, who is the proud mom of Delaware harness racing media personality Heather Vitale. “He’s always got a smile on his face. When things go bad, we always have each other to depend on. It’s nice to have each other to be there when things go bad. It’s a tough business, you have to be ready for heartbreak, because you are going to get it.”

Maybe so, but why think about that? Especially when you can fire up the DVD player and think about what happened 363 days ago. Now, that was worth remembering.