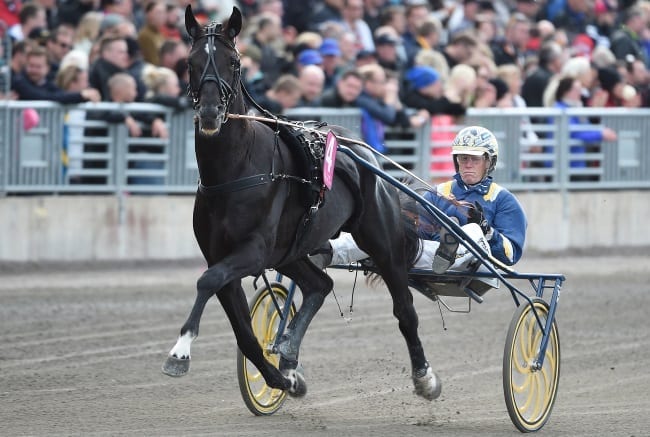 Both trotters drew post two in their respective divisions for Sunday’s classic at Solvalla.

SOLVALLA, SWEDEN — This Sunday (May 29), 16 of the world’s quickest trotters will battle for glory and fame over the mile in The Elitlopp 2016 at Solvalla Racetrack.  Both U.S-based Resolve and former U.S.-trained Nuncio drew a perfect post (two) in each elimination.

Among the 11 most important newspapers, Resolve is the early morning pick in four, while Nuncio is the pick in all 11, and also a heavy banker in seven.

Resolve arrived in Sweden last Monday and got full attention. At a very small airport some 100 miles from Stockholm, the heavy Jumbo jet touched down around midnight. Stories and photos were spread of this spectacular arrival. After a vet-check with no issues, Resolve came to Swedish trainer Stig H Johansson’s farm, just outside Stockholm, early Tuesday morning, in company with Lukas Wallin, the groom.

“I took him out jogging on Tuesday and he’s really okay, smooth and in a good mood, looking around at all the new (surroundings)”, Wallin said.

Resolve’s performance in the Mack Lobell Elitlopp Playoff on May 8 at The Meadowlands — where he finished first by more than four lengths, but was disqualified for going inside pylons in the stretch — got him the invitation for The Elitlopp. Through the camera, there and then, he was also presented to a wider Swedish audience, and I guess most Swedes took notice of a horse that has at least two forceful speeds in a race.

“That’s exactly what Åke (Svanstedt) says about him,” Wallin said. “Though he might not have the most graceful gait, he always wants to do his best. Last time out, he had no shoes at all, and since we have saved his feet, I’m almost certain he’ll have no shoes in the (Elitlopp) elimination.

Thinking of the tactics in Resolve’s race, Wallin said:  “From post two, I think he has a good chance to keep the others on the outside and then I guess Oasis Bi on the inside will give him the lead. Then he should have a good chance to win.”

Nuncio was in The Elitlopp last year. And what most of us remember, was his performance in the final. There, he raced three-wide in three turns, without cover all the way, and despite laws of fatigue, he was a head from winning. His former trainer Jimmy Takter was on hand and acknowledged: “The show was by Nuncio.”

This year, Nuncio is almost everyone’s favorite to win. Trainers and drivers mention him with deep respect. During the last two months, Nuncio has performed four times with four wins. But he’s not been perfect, twisting his head to the left down the homestretch, not always keeping a straight
line. In his last race though, the equipment was changed and he was perfect.

Stefan Melander, the man behind Nuncio, had a wish that John Campbell would drive his star this time, but Campbell couldn’t make it. It came as a surprise that super driver Örjan Kihlström will race Nuncio in The Elitlopp on Sunday. After difficult discussions with all involved, Kihlström declared last Sunday, on the day of the draw — at the same time saying no to drive Magic Tonight, with whom he won The Elitlopp last year — that he accepted Melander’s invitation.

On the inside, Nuncio has Royal Fighter (post one), who last year won his elimination to some surprise, by keeping Nuncio behind him, and then was locked in the pocket in the final. Last year, driver Jennifer Tillman was the third female in the history of the race, and she’s behind Royal Fighter again. The team is likely to explode to the lead on Sunday.

Five of this year’s contenders in The Elitlopp, were seen in the Yonkers International Trot in October last year. There, the French superstar Timoko finished second, and according to driver Björn Goop, raced his best race ever. This year, Timoko, now nine, is in The Elitlopp for his fourth time, and he won it in 2014.

If Timoko wins again this year, he will advance from place seven to four, among the 10 trotters earning the most lifetime in the history of the sport.

Back in Resolve’s elimination and with memories from the U.S, you must keep an eye on Propulsion (three) who is undefeated in six races here, and who won The Finlandia Ajo over the mile last time out. There he took an easy win outside the leader all the way. If Resolve was the early morning pick in four papers, Propulsion in the same race is the pick in five.

On Sunday, around 30,000 patrons will visit Solvalla racetrack. The weather forecast predicts a warm and sunny afternoon. The sum of $360,000 awaits the winner of The Elitlopp 2016.