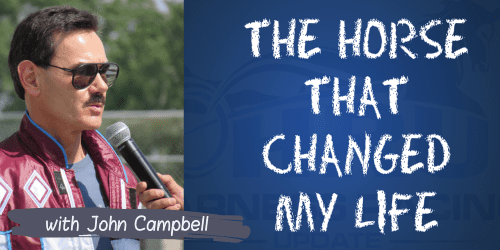 The Horse That Changed My Life: John Campbell

John Campbell has driven a long list of the greatest horses to ever pull a sulky. But the horse that changed his life was a more modest standardbred that came along at a time that was fortuitous in more ways than one.

Argyel Chester was foaled on the Campbell family’s farm near Ailsa Craig, ON on April 8, 1966. It was the night of Campbell’s 11th birthday and Argyel Chester arrived while the family was out for dinner to celebrate.

“We went to London and came back and he was there,” Campbell said. “He was a sharp-looking colt. He was a pretty chestnut horse and I just fell in love with him.”

The foal was a Newport Duke colt out of Argyel Margaret, a mare owned by John’s grandmother, Bernice.

“My grandmother gave me half of him for a birthday present. It was really great,” Campbell said.
Argyel Chester went on to win $91,323 and set a mark of 2:00.2 racing mostly in the top classes at Western Fair Raceway in London.

“I had money in high school,” Campbell said. Enough money to buy a brand new Oldsmobile Cutlass. “It was a nice car.”

While that status — and the connection to his grandmother — was important, Campbell said another horse was more responsible for setting him on a course to becoming the most successful money-winning driver in the sport’s history ($296 million and counting).

“The one that I raced against the top horses at a young age was Derbys Gent… Derbys Gent was the first time I went to Roosevelt. I was 20 or 21 years old, I think,” Campbell said. “We were racing at Monticello and he had won his way out of Monticello and they invited us down for just a special free-for-all. Then he raced against Rambling Willie and Handle With Care in the Provincial Cup at Windsor. He gave me a chance to see racing at the highest level.”