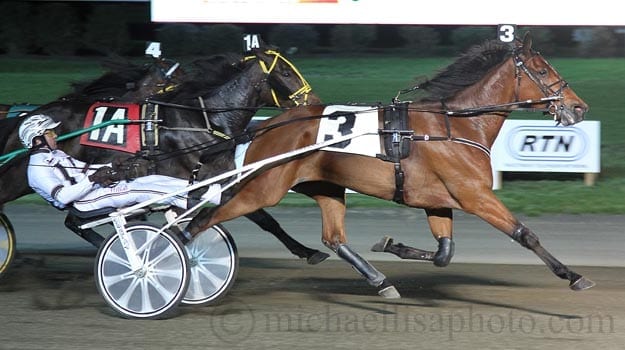 Will They Stay Or Will They Go?

With the inaugural Mack Lobell Elitlopp Playoff two weeks away at the Meadowlands, some of the eligibles discuss whether they would accept the invitation to race in the Elitlopp that goes to the winner of the Playoff.

The winner of the Mother’s Day race, to be held on a special afternoon card at the Big M, receives an invitation to race at Solvalla on May 29 in the Elitlopp.

“That’s a big decision right there to accept that and go,” Kelley said. “The truth is the matter is, I’ve been to the race and it’s a fantastic event, but there’s so much money to race for here in this country. You’ve got to think about how much you’ve given up on the flipside coming back with the recovery and all that to make it really worth your while to go over there.”

Kelley is one of about a dozen trainers who are mulling over that exact same question from the 14 horses that remain eligible to the Elitlopp Playoff.

Bee A Magician’s connections said more than a month ago that they are wary about taking their magnificent mare to the Elitlopp for the same reason Kelley expressed. Reached Friday at the Meadowlands shortly before Bee A Magician made short work of the $25,000 open-handicap field, winning in 1:52, the mare’s trainer, “Nifty” Norman said that if the daughter of Kadabra—Beehive won the Elitlopp Playoff, the owners would make the final decision whether to send her overseas.

But recent serious injuries to star trotters Mission Brief, Maven and Creatine give them all pause that racing at the sport’s top level is fleeting and making money while you can is critical.

In early March, Bee A Magician’s part-owner David McDuffee said, “I would have said a couple of years ago that we definitely have to go to Europe, but to be honest with you, they’ve got so many good races here now. You can make so much money here and the horses that have gone over there haven’t done that well when they’ve come back. It’s tough running them back and forth and getting them out of their routine. We can get 15 good races for her between here and Canada. My guess is we’ll probably stay right here. If she was lucky enough to win that race at the Meadowlands, I know we’d consider (the Elitlopp), we just have to. We just have to wait and see after that.’

McDuffee said the issue isn’t whether Bee A Magician is up to the task.

“She’s good enough to go. The problem is the timing of it. It’s really the beginning of our season here. You go over there and you lose two or three months here by the time you get re-acclimated,” he said.

Trainer Ron Burke has three trotters still in the mix for the Elitlopp Playoff, including Gural Hanover, who finished three-quarters-of-a-length behind Bee A Magician in Friday’s race, just ahead of fellow Elitlopp Playoff eligible Shake It Cerry. Burke also has Crazy Wow and DW’s NY Yank still pointed toward the Playoff.

“I would almost say for sure for everyone except for maybe Crazy Wow (would go to Sweden),” Burke said Friday afternoon. “Crazy Wow has more races here that he would have to give up. It’s hard to give them up with him, but if I thought he had a chance to win, yes I’d go. To me, (winning the Elitlopp) is the greatest achievement you can have as a harness person.”

“It’s funny, (three-year-old Hambletonian favorite Southwind) Frank, I want to race him at four, but I think I’m going to end up being voted down and not race him at four. That’s the reason I want to win (the Elitlopp). It’s hard if your best horses are retired after three or four. You’re not going to win that race at four. You need to keep a horse almost until he’s five. I hope people still buy into trying to keep horses going by racing and breeding them.”

All the trainers contacted said they could deal with the special Elitlopp Playoff rules that mirror some of the Elitlopp restrictions — namely, no Lasix and no trotting hopples. Burke said he’s not thrilled Gural Hanover will have to race without Lasix, “but for a week or two, it’s not going to bother him.”

He said the bigger problem was finding races for his trotters to get them in shape to contest the Elitlopp Playoff.

“That’s the biggest thing. I can’t get them raced to get a feel for where they’re at,” Burke said.

Assessing the field, Burke said he felt like he had a good shot.

“I don’t think anybody other than JL Cruze has been outstanding and it was only his last start where I thought he was outstanding. Maybe Shake It Cerry, but the rest of them have not been,” Burke said before Bee A Magician’s 2016 pari-mutuel debut on Friday. “Crazy Wow I expect he’ll be really good in his next qualifier and then he’ll get a start and that should tell us if he’s ready to go.”

Whether not he, or any others, will go to Sweden if they win the Elitlopp Playoff is another matter.