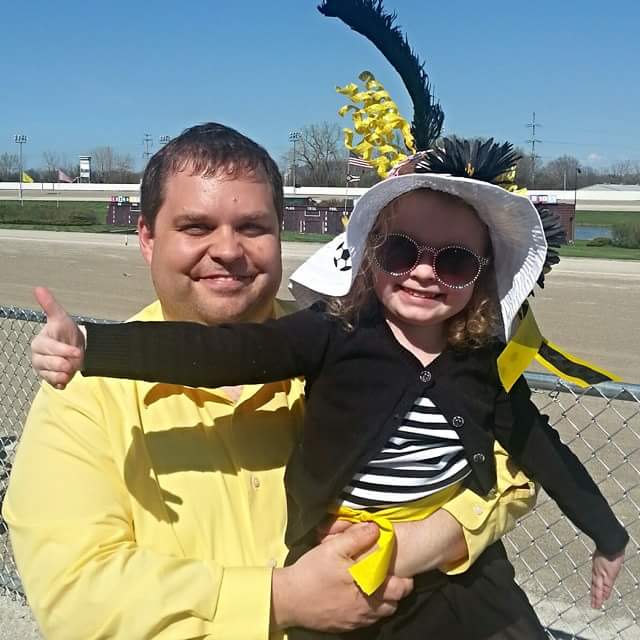 Nose to the Grindstone

It’s 7 o’clock on a Thursday morning at Northfield Park and a cell phone is ringing in Room 104 of the backstretch dormitory. It’s Heidi Ratliff calling to wake up her husband so he can start another of his whirlwind days of long-distance labor.

Ayers Ratliff is Northfield’s track announcer. He is also its director of racing communications. He’s also the track’s assistant director of racing. He does a tip sheet on the nightly 15-race programs. He handles the harness track’s Twitter account, sending out dozens of news blasts. He used to be Northfield’s oddsmaker, but TrackMaster and the USTA took that job away from him when they hatched the automated morning line a year or two ago.

Odds are it has freed up Ratliff to devote more time to his other jobs – county fair announcer, emcee for Video Lottery Terminal (VLT) contests at the nearby Hard Rock Rocksino, tax professional for H&R Block and, oh yes, Ward 2 councilman back home in Marion, OH.

In the song “Movin’ Out,” Billy Joel wrote lyrics about a cop, but he could have easily penned them for Ratliff, had he known the man with the round face and many, many work hats.

Sergeant O’Leary is walkin’ the beat
At night he becomes a bartender
He works at Mister Cacciatore’s down on Sullivan Street
Across from the medical center.

Ratliff’s back is fine and his fenders aren’t on an expensive fully loaded Caddy, but a 2006 Honda Civic with 167,000 miles and a set of tires that are constantly in need of rotation or replacement.

The reason he is waking up within a short walk to the Northfield Park racing office is because once a week (twice when there are five-race cards a week, October through December) he cobbles together the race cards.

Why not sleep in his own bed? Marion, where Ratliff and Heidi are raising sons Dusty, 18, Del, 16, and daughter Annie, 5, is 113 miles from the Northfield finish line where he called the previous night’s last race winner just seven-and-a-half hours before his wife gave him the Tuesday morning wake-up call.

“With my racing office duties, it doesn’t make sense to drive home on Monday nights,” said Ratliff. “I keep the room year-round. And, no, there isn’t maid service. I make my own bed and then get breakfast in a quick run at the drive-thru at McDonald’s. I’m at my desk by 8 a.m.”

Then, after closing the entry box, drawing post positions and proofing the program pages, he’s on the road by 2 p.m. for the drive home. Not really home, but to the H&R Block office in downtown Marion for four or five hours of doing people’s taxes. The tax chores stretch at least two or three more times a week.

Ratliff, who will turn 39 on March 5, doesn’t want people to get the wrong idea regarding his work regime.

“Both my grandfathers were hard-working coal miners in Virginia. I was raised to be hard-working,” he said. “I’ve had multiple jobs all my life. Having a supportive wife is very helpful. We have a comfortable life and don’t want for anything, but I make sure there is a balance of work and family activities.”

Ratliff, a 2006 graduate of Ohio State University, admits that during peak tax season, he’s working 90 hour weeks, but that he’ll be back to a somewhat normal schedule after the U.S. filing deadline on April 18.

“I’m lucky to get 25 days of vacation a year, so we schedule several family trips,’’ he said. “We went to Chicago last summer, to an Indians game in Cleveland, and also did camping and canoeing trips. And we have memberships to the Columbus Zoo and COSI (Center of Science and Industry).”

One of Ratliff’s joys is being able to take his daughter to pre-school four mornings a week and also bringing her back home for lunch before leaving for Northfield shortly after noon.

“My schedule is pretty routine Monday through Wednesday,” he said. “I get to the track in time for department head and marketing meetings, then head to the pressbox to answer emails, do a selection sheet, write a few press releases, tweet about racing and then prepare to call the races.”

Ratliff is proud to be upholding Northfield’s tradition of hiring and hanging on to announcers for long spells. In 60 years there have been just three men to hold the job. Ratliff, in his 10th year in the booth, has followed Gregg Young who replaced Andy Cunningham.

Every other Monday, Ratliff remains in Marion to attend evening city council meetings.

“I love politics,” he said. “Marion is where I was born. I want it to do well. I’ve been a councilman for 11 years. Serving the city and being a race announcer are my dream jobs. I say that even though some nights I don’t get home from Northfield until 2 in the morning.”

Ratliff, who called his first race at the Marion County Fair in 1998, and crafted his style through full-time stints at Scioto Downs and Thistledown, enjoys Ohio’s fair circuit. He works more than a dozen fairs each summer and fall.
“Fair racing is where Ohio harness got its start,” he said. “Heck, I even get a kick out of calling matinees. It’s pure racing.”

Ratliff is grateful for his place in standardbred racing. He’s doing what he loves, which wasn’t always the case.
“The worse job I’ve had had was being the activities and social service director at a psychiatric nursing home near Columbus,” he said. “One night, I thought I’d tough love on a guy who was close to being totally out of control. I yelled at him and he threw a table at me. I was bruised from head to ankle.”

Ratliff immediately started sharpening his focus on full-time work in the harness industry. And, boy, did he find it.
“You couldn’t work as much as I do and not enjoy it,” he said. “Other than family, my two favorite things in life are harness racing and politics. I’m lucky to be doing both. It sure beats working.”